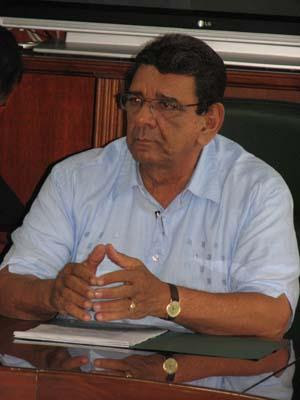 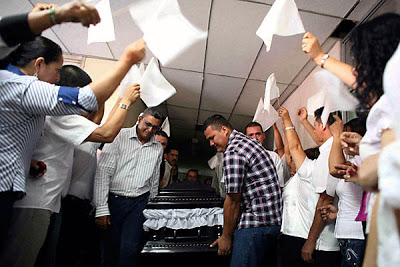 Above, Governor Luis Francisco Cuellar of Caquetá state in Colombia, who was kidnapped Monday and killed by alleged rebels. Below, relatives and friends carry coffin containing his body as people wave white flags during his funeral service in Florencia, southwestern Colombia, Wednesday. Photo by William Fernando Martinez / AP.
Assassination of Governor Cuellar Carvajal
Believed to be work of Colombian rebels

According to local media reports, a group of 10 heavily armed men attacked Governor Luis Francisco Cuellar Carvajal’s home in the center of Florencia, the capital of Caquetá. Cuellar was taken out of his home and pushed into a car.

Late Tuesday, the getaway vehicle was found in an isolated area a few miles from Florencia. It had been driven off the road and burned. In a nearby field the body of the Governor was found, his throat cut. There was some delay in recovering the body as the field had been mined with explosive devices.

One policeman, part of the governor’s security detail, was also killed, in the initial attack at Cuellar’s home, authorities say.

The state’s Secretary of Government, Edilberto Ramon Endo, told reporters that the governor had felt threatened by the FARC, and had requested increased government protection against possible attempts to kidnap or kill him. Although no group has yet to take responsibility for the attack, Endo was quick to blame the FARC. “There is no other group active here but the FARC, it is highly likely it was they who kidnapped him,” he told newspaper El Tiempo.

According to television station Caracol, President Alvaro Uribe has sent National Police director Oscar Naranjo to Caquetá to coordinate the kidnapping investigation. The national government had offered a reward of $500,000 (U.S. dollars) for information leading to his safe return before the grim discovery on Tuesday.

According to Defense Minister Gabriel Silva, the army sent 300 troops to look for the kidnapped governor. Silva also told the press on Tuesday that the kidnapping seems to be the work of the FARC, specifically the mobile Teofilio Forero column. “This illustrates how narco-terrorists are looking to show their strength and how they want to disturb democracy, but the state is ready to confront them,” Silva said. There were unconfirmed reports that “heavy fighting” had broken out between state troops and guerrillas in Caquetá.

Assassinations are commonplace in Colombia. Just this year 25 union leaders have been killed, as have human rights activists and indigenous leaders, and there have even been wholesale massacres of suspected FARC sympathizer. However, this is the highest profile murder in recent history. The assassinations and massacres are carried out by all sides, paracos, police, Colombian Army (COLAR), FARC, M-19 and others.

The FARC had not kidnapped any high-profile politicians since 2002, when they were able to kidnap presidential candidate Ingrid Betancourt, former Defense minister Gilberto Echeverri, and twelve deputies from the state of Valle del Cauca. The rebels had released the last politician in their captivity, Sigifredo Lopez, exactly one year ago.

Caquetá is in the Amazonas region of Colombia. The capital, Florencia, is in the north, bordering on the state of Huila. It lies on the steppes of the Cordillera Oriental mountain range, part of the Andean chain. To the south of the city lie the Amazon jungle and the departmentos of Putumayo and Amazonas.

The FARC’s Southern bloc operates about 16 fronts along the borders with Ecuador and Peru it. It covers the Colombian departments of Caquetá, Huila, Putumayo, and parts of Cauca.

Up to 90 specialized Southern bloc militants form the Teofilio Forero Mobile Column, operating mostly in Huila and Caquetá, with a lot of urban activity. In the FARC organization, a column consists of two or more companies, commanded by a Captain, in this case by “El Paisa” (the raisin), whose real name is Oscar Montero. A front is two or more columns and is commanded by a Lt. Colonel.

Oddly, the Teofilio Forero Mobile Column had been reported as dismantled by the previous Minister of Defense, Juan Santos, in 2005, as a result of Plan Patriota.

At the same time the 3rd and 14th Fronts were also reported as dismantled.

It has been believed that the remnants of the Column were later melded into the 3rd and 14th Fronts to become the Yesid Ortiz Mobile Column. The 14th Front was a command Front, and included the Southern Bloc commander, a Brigadier General. Why the Teofilio Forero Mobile Column has been named as the perpetrator of Monday’s assassination is unclear at this time.

Uribe vows state troops will continue to fight the FARC and find those who are responsible for the kidnapping and death of Cuellar.

The governor’s son, Luis Fernando Cuellar, told Caracol Radio he also believes the FARC is guilty of his father’s assassination, criticizing the government for failing to protect him, despite his already having been kidnapped four times since 1987. He was held for 2-7 months on each of those occasions and released when a ransom was paid. Cuellar’s wife, Himelda Galindo, claimed she couldn’t remember the amount of the ransoms paid. According to the governor’s son, the victim was protected by only three policemen when he was kidnapped.