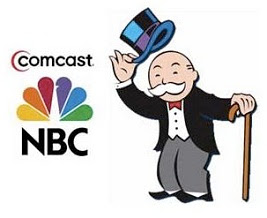 Image from ZeroPaid.
The Comcast-NBC marriage:
The importance of Net Neutrality

With a monopoly on delivery, what’s to stop a new breed of ISPs/cable providers from dictating content to customers?

See ‘Internet war: The fight for free access,’ Below.

A scary thing happened last week when the Comcast Corporation, the largest cable provider in the U.S. and ISP to some 15 million customers, decided to to purchase NBC Universal in order to delve further upstream from the pipe that simply delivers content to the world where’s it created.

“We believe this venture represents a natural evolution in the world of communications and entertainment, a marketplace that becomes more open, more competitive, and more global every day,” it says. “The opportunity to combine these assets makes possible some innovative programming opportunities that will permit the new company to better serve the interests of many key segments of the viewing audience, including local viewers in the markets served by NBCU’s owned-and-operated stations, and the particular interests of Hispanics, African Americans, children and families, and other key audience segments. This combination also permits us to hasten the arrival of the multiplatform, ‘anytime, anywhere’ future that Americans want.”

In other words, it has seen the writing on the wall in terms of streaming video-on-demand services. Consumers increasingly want to watch content when and where they want.

However, the move means Comcast will control every step of the system from content creation to delivery, and could easily begin preventing customers from accessing competing content or charging them more to do so than they would normally as a sort of a penalty.

“While we believe that this transaction is, and will be determined to be, pro-competitive, pro-consumer, and strongly in the public interest, we recognize that competitive concerns will be raised about the combination of such significant multiplatform assets in a single company,” it adds. “Therefore, we also intend to make a number of affirmative voluntary commitments in our applications for approval that we believe will effectively address any such concerns.”

It leaves out the fact that none of its “commitments” say anything about guaranteeing online access to its competitors or allowing competing streaming services to exist on its network. Since streaming is the future of content delivery it’s important that equal access be guaranteed to all, especially since ISPs enjoy regional monopolies around the country (try finding more than one broadband provider in your area).

“I am not exaggerating when I say that Comcast’s proposed acquisition of NBC Universal poses a genuine threat to free expression and diversity of speech in our democratic society,” says Andrew Jay Schwartzman, president of the Media Access Project, a non-profit law firm and free speech advocacy organization that promotes freedom of expression, independent media, and low-cost, universal access to communications services.

“I believe that the sale should not be permitted. The deal is the first attempt at vertical integration of content and delivery in the broadband era. It presents antitrust and communications regulators with the challenge of addressing whether any one company should be allowed to hold dominant positions in both video and Internet delivery,” he says.

The easiest manifestation of the harm it could do to competitors is the simple withholding of NBC content from both standard cable and online competitors. It also has an inherent interest in making sure that competing video streaming services don’t succeed.

Comcast CEO Brian Roberts says that “today NBC makes certain content available online and I can’t imagine we will change that process,” but we all know that could change with time. The primary concern of a business will always be profits, and it’s only a matter of time before Comcast begins attempting to maximize the potential of of NBC content by dictating the price and availability.

Gigi Sohn, executive director of Public Knowledge, a public interest advocacy organization dedicated to promoting the public interest in access to information, warns that the deal will ultimately harm consumer choice and result in higher fees for services.

“With all that programming under its control, Comcast will have every incentive to take its shows off of the Internet and force consumers to buy a cable subscription to get online access to that programming,” she said. “Want to watch reruns of 30 Rock? Buy a Comcast subscription.”

The whole affair makes Network Neutrality even more important. Federal Communications Commission (FCC) Chairman Julius Genachowski has already emphasized that we need to “safeguard the free and open Internet” by ensuring, among other things, that consumers must be able to access the lawful Internet content, applications, and services of their choice.

Without it, Comcast will have a free hand to do as it pleases. 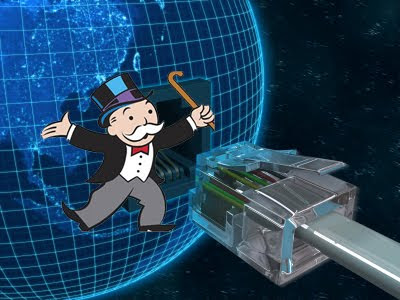 There is a silent battle occurring in Washington, D.C., over our ability to freely access and exchange information through our last unbiased medium, the Internet. The telecom industry is feverishly buying up policy-makers in an attempt to block new, unanimously approved FCC regulations on Internet service providers.

The new plan would ensure Internet users’ equal rights to its content, while prohibiting broadband providers such as AT&T, Comcast and Verizon from selectively blocking or slowing content and discriminating against competitors.

In retribution, the big telecom interests are sending a message using their highest paid member of Congress, Sen. John McCain, to submit the Internet Freedom Act, which is anything but. The act states the FCC “shall not propose, promulgate or issue any regulations regarding the Internet or IP-enabled services.”

So the FCC would not be allowed to be the FCC, giving service-providers freedom to control, without checks, any and all bandwidth, connection speed, content and applications.

Misleading policy makers and scare tactics should be ignored. FCC regulations would only affect the big Telecom interests and not the Internet itself. Opponents mistakenly claim regulations might slow innovation. Does this include censoring, blocking or stifling applications such as VoIP, Google Voice and legal peer-to-peer networking applications by companies such as AT&T and Comcast?

Regulation preventing such acts, according to a number of studies, will not only lower prices and guarantee higher performance overall, but open the web to more users — allowing people to share ideas and programs and accelerating innovation and investment. AT&T’s own two year experiment in 2006 with neutrality rules brought about greater increases in investment than any other ISP in America.

What deregulation means to these companies is not freedom from some fictitious dictatorial power but immunity from having to answer for their own irresponsible and inevitably oppressive actions. What has deregulation really given us, besides robbing us of laws designed to protect the environment, worker safety and consumer rights?