COMICS / Paul Buhle : Beyond the Superhero 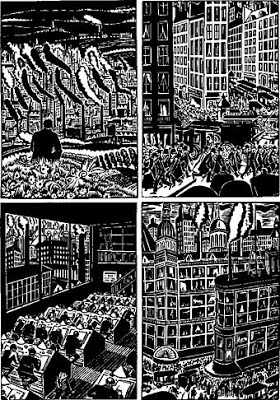 Pages from Die Stadt (1925), a “novel in woodcuts” by anarchist artist Frans Masereel (1889–1972). Masereel’s novels are not usually treated as “comics.”
Beyond the superhero

Comic art has been global for at least a century. Comic strips have passed from nation to nation through the commercial press and, at least now and then, the socialist and communist countries.

The woodcut novels of Belgian leftwinger Frans Masereel would have been the greatest, but were not usually treated as “comics.”

Until the last couple of decades, most of the exchanges involved European and U.S. exports and imports. Manga from Japan changed things, but so has the work of unique geniuses like Osamu Tezuka, Robert Crumb and Art Spiegelman, joined more recently by Marjane Sartrapi and Alison Bechdel among others.

Too often they mirror the violence and racial sentiments of the superhero genre that first made U.S. comic books famous and grandly profitable, providing wartime reading among soldiers a long way from home. But not always, not by a long shot.

The absence of corporate domination of comic art in Canada, experts say, has opened the door to some of the most artistic productions in the English language via Montreal’s Drawn & Quarterly press.

Its publications are not political as such, but the artist known only as Seth, for example, has delivered extended treatments of the essential loneliness of modern middle-class life, looking a few generations back and forward to the present. He also drew and wrote from oral history the saga of his father’s desperately poor 1930s childhood in the maritime provinces. 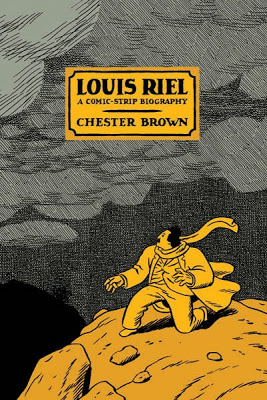 Drawn & Quarterly is also the best publisher of admired Chicago artist Chris Ware, an inward and backward-looking artist who nevertheless reveals from time to time how he despises the presumptions of empire and the layers of psychological distortion necessary to keep the citizenry in line.

Then there is Aya by African writer Marguerite Abouet and French artist Clement Oubrerie, a trans-border collaboration of another kind. An adolescence-gender drama that relates daily life in the Ivory Coast of the 1970s, it depicts a recently decolonized society making use — or misuse — of its resources, cutting down the forest for agricultural production and creating a surplus for a degree of comfort for the urban lower-middle classes.

A young woman aspires to be a doctor but finds herself trapped on all sides, helping a friend seek an abortion and then accept the finality of single motherhood instead. Not much else happens out of the everyday. But the color work is lovely to look at and the attempt at realism notable.

Beyond Drawn and Quarterly, there is Nelson Mandela: The Authorised Comic Book, an African but also global story of another kind. First published in South Africa last year and printed in China, like the most lavish comic art these days, it appears this month in a U.S.-British edition released by the Nelson Mandela Foundation.

Researched, storyboarded, drawn and inked by a team so large that no artist’s credit appears on the cover, it is somewhat grey in more than one sense.

The South African Communist Party’s role has been minimized, even though individual Communists achieve heroic status. The art seems to me both stiff and predictable. On the other hand, the saga of struggle against racism, like the courage of the protagonist, should leave an indelible impression on young readers in particular.

There is so much more to say on comics’ global reach. Scratch a little harder and small items like the Canadian Mayday: A Graphic History Of Protest, a lively 24-pager recently published in Vancouver, are likely to turn up. But this column is merely a first look.

[Paul Buhle is an educator and historian and a publisher of left wing comic books. His latest book is The Art Of Harvey Kurtzman (Abrams), an exploration of the genius who created Mad Magazine and brought together John Cleese and Terry Gilliam of Monty Python’s Flying Circus. His writing about comic art and other subjects will continue to appear in The Rag Blog. This article was also published in Morning Star, U.K.]

This entry was posted in Rag Bloggers and tagged Books, Comics, Comix, Literature. Bookmark the permalink.