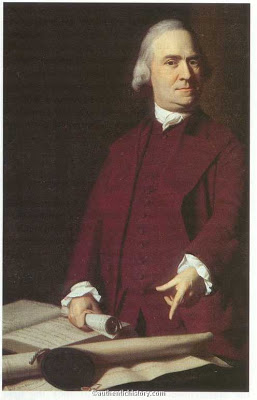 Sameul Adams: “Crouch down and lick the hands which feed you.”

If proposed health care legislation is to be a farce and a sham, [I hope] that the progressives… will vote it down, and deny the insurance and drug companies and their lackeys the satisfaction of knowing that they have hoodwinked the American public.

“Ye love wealth better than liberty, the tranquility of servitude better than the animating contest of freedom — go from us in peace. We ask not your counsels or your arms, Crouch down and lick the hands which feed you. May your chains set lightly upon you, and may posterity forget that you were our countrymen.” — Samuel Adams

It would appear that the hope for a decent health care system in the United States is quickly evaporating into thin air.

Members of the United States Senate have constantly exhibited their cupidity, their deviousness, their devotion to the corporations who are their paymasters. The House of Representatives, save for the Blue Dogs, has shown a bit more fortitude, a bit more idealism and desire to serve the public and raise the quality of our health care to a level commensurate with the other nations interested in the well-being of the public, rather than in avarice inherent in our money driven, materialistic society.

The general public, save for that idealistic minority who have dedicated their time and resources to achieving universal health care, has been apathetic, exhibiting a lack of sophistication and self respect, falling victim to the propaganda and fear mongering reminiscent of Germans of the 1930s.

The Germans had their Ernst Roehm and we have our Dick Armey, abetted by such shady characters as Richard Stephensen who founded Cancer Treatment Centers of America; Rick Scott, a founder of Conservatives For Patients Rights; Adam Brandon and Matt Kibbe of FreedomWorks; Chris Chocola of The Club For Growth; and Jim Martin and Pat Boone of The 60 Plus Association. Much of the mainstream media has been complicit in spreading misinformation to a gullible, uneducated, uninformed public, with the notable exception of MSNBC TV, the McClatchy Newspapers, The Nation and Progressive magazines, and progressive sources on the internet such as The Rag Blog.

We now have Health Secretary Kathleen Sebelius reporting that the President has conceded that there may be no public option, as he long ago retreated from the much more economically sound, much more efficient single payer plan. We have now Mr. Obama espousing “insurance cooperatives,” a complete concession to the insurance companies, a plan espoused by the Republican Party, a plan that is totally untested. This is a concept that is totally acceptable to the insurance cartel and its lackeys. The AMA and AARP will be dancing with joy as they have repeatedly promoted “health reform” but have never endorsed a public option, or single payer health care.

This concession to the insurance industry follows on the heels of Mr. Obama’s surreptitious, secretive deal with the pharmaceutical industry reported initially last week by The New York Times and The Nation. This perfidy has been condemned by Robert Reich in an article distributed by CommonDreams. Greg Palast reported in the Huffington Post that President Obama had reached an agreement with the big drug companies to cut the price of medicine by $80 billion. A lot of money to most of us, but small potatoes to the pharmaceutical industry. Mr. Palast calculates that the industry will make a $3.6 trillion profit over the next ten years. Thus, Obama’s deal saving $80 billion out of a total of $3.6 trillion comes to a savings to the person getting a prescription filled of 2%!

The negotiator for the pharmaceutical industry, according to Mr. Palast, was ex-Congressman, Billy Tauzin, in concert with Chip Kahn of the American Hospital Association. The deal with the AHA will reduce the $26 trillion hospital bill over the next decade by one half of 1%. It should be noted that 13 European nations, according to The New England Journal of Medicine, successfully regulate the price of drugs, reducing the average cost of name-brand prescription medicines by from 35% to 55%. Obama gave that up for his 2%.

In my near 88 years I have been disillusioned or frightened on several occasions. I experienced a mixture of dread and disgust when Neville Chamberlain made the Munich agreement with Adolph Hitler. I, as a young man, became extremely apprehensive about events of 1939 as World War II began and of the subsequent events of December 7, 1941.

I lost faith when I learned that President Johnson had lied about the events in the Tonkin Gulf. I was frightened at the loss of civil rights in our nation under the ascendancy of Sen. Joseph McCarthy. I was likewise frightened by of the manipulations of the George W. Bush administration even prior to 9/11. Now I face what well may be the last national crises I may encounter, the deceit and poor administration of a president who I actively supported and for whom I had high hopes.

Many of us were dismayed by Mr.Obama’s appointments of his financial advisors, noting his choice of folks who were complicit and party to the collapse of the U.S. economy, rather than choosing from among those economists who had anticipated and warned the nation of impending problems. We have been quite concerned about his intensifying the war in Afghanistan. Why? Why? Why? Obama is an intelligent man, but what does he really hope to accomplish in a non-nation, a collection of tribal societies, which defeated Alexander the Great, the Ottomans, the Mongols, the British, the Russians?

He has vacillated on the subjects of civil liberties and sexual rights. Now we have a total collapse of any meaningful legislation for health care in this country, which would be the final blow. Finally, the “Obama For President” bumper sticker comes off of my car! I will add this disappointment in representative government to the others I have mentioned, and finally concede what I had long suspected: that our nation is not governed by our elected representatives, but by the corporate power structure, and that even the President is a pawn in the game controlled by those who control the nation’s wealth.

My only remaining desire is that if proposed health care legislation is to be a farce and a sham, that the progressives in the House of Representatives will vote it down, and deny the insurance and drug companies and their lackeys the satisfaction of knowing that they have hoodwinked the American public, and perhaps, just perhaps, be in a position to try again in 2010 or 2012.

I felt that the opening quotation from Samuel Adams was appropriate to the cultural and intellectual deterioration in American society today. Those brave men who wrote the Declaration of Independence — and many of the signers — were executed, jailed, tortured, or destroyed financially. These dedicated souls would, I fear, be aghast at the ethical and moral decay of today’s money-dominated society.

These were men of honor, largely secularists, products of the thinking of Voltaire and The Enlightenment, who were driven by idealism and a sense of community. Their thinking and values were not based on greed, nor were they confused by mythologies and prejudices. They were not dominated by hate, envy, or dislike of those of various ethnic or philosophic backgrounds.

Where over the past two hundred years have the American people lost their sense of compassion and decency? Where have we lost our Christian teachings, of taking care of the sick, the lame, those in pain, and the poor? I noted in one poll that 60% of fundamentalist Christians had never read the Sermon on The Mount for themselves. Are we ready to accept a health care system that consists of crumbs from the rich man’s table? Are we prepared to accept the fact that our nation ranks 26th in the world in health care delivery, and affordability ?

Concurrent with the demise of the health care in this country is the decline of our educational system, and perhaps there is an interrelationship. Our children barely know how to read — perhaps because their parents spend so much time watching television instead of reading to their kids. Our schools are dominated by elected school board members whose understanding of education is marginal at best, as they attempt of infuse creationism or other mythologies into the elementary schools rather than helping children learn how to think and teaching mathematics, grammar, composition, foreign languages, or science.

In our secondary schools athletics often take precedence over learning. There are no national criteria for high school graduation. College here, unlike in Europe or Asia, is not a broadening experience, with real attention placed on history, economic or political geography, philosophy, the arts, or creative thinking. Our institutions of higher learning have become little more than business schools, preparing students for the business world –- for making money.

Many young folks are not prepared to go to college and require as many as six years to graduate — if they graduate at all. Perhaps we should create trade schools of high quality and give those with less ability to comprehend the nuances of true higher education more of a chance to succeed and gain self respect in non-academic areas. Maybe we should consider establishing universities, administered in a European manner, with control in the hands of trained educators in a ministry of education, rather than being run by boards of trustees with personal political agendas.

Perhaps we should have government subsidization for qualified students so that students are not up to their ears in debt by the time they graduate. Perhaps, we as in Europe, should subsidize medical education thus providing an adequate number of primary care doctors, i.e. general practitioners, internists and pediatricians.

One final thought. I note that only 20% of American’s have living wills. Living wills have nothing do with euthanasia as the right wingnuts would have one believe. A living will provides us with the opportunity to give specific directions about how we wish our death to be treated by the medical community. This should not be a decision for an outsider, but is something we should decide in serious discussion with our family, attorney, physician, and/or cleric.

This must be recorded as an advance directive (your attorney has forms, and frequently the neighboring hospital has them). The instructions must be meticulous, and signed, in most states, by two witnesses. In addition, the next of kin, or other relative or friend, must have written instructions concerning what care we should should we be unable to make decisions for ourselves, i.e. a “power of attorney for health care.” Copies to family members, ones doctor, and ones clergyman.

There are two problems: 1.) In the USA there is an apparent cultural prejudice against discussing the matter of dying. Hard to understand, for in most cultures it is accepted that one is born, one lives and one dies. 2.) From my experience as a physician, I think that most people want to die with dignity, in their own bed, free of pain, with loved ones at their side. Your local hospice can advise on this. Most folks do not want to die in an ICU, among strangers, with tubes in all orifices, a ventilator clicking away, IV drips running, beepers beeping.

My experience with death bed encounters is that all loving, caring relatives have decided to let father die in peace; however, at the last minute the daughter from Seattle, who has not seen father for 20 years, appears on the scene with a cry “you aren’t going to let father die without doing everything possible, are you?” Guilt does strange things…

One final thing to remember; The CEO of United Health Care makes a salary that when broken down comes out to $102,000 per HOUR. Are you happy that he will continue to do so well? I would suggest you take the opportunity to read “The Gorilla Dust of Health Care” by Michael Winship.