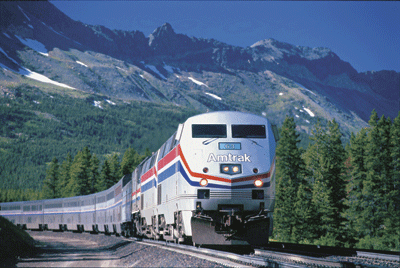 Bush wants to veto Amtrak cash
when it’s needed most

Now that the airlines are dying due to soaring jet fuel costs, it could well be that there is not enough rail capacity to pick up the slack. Especially since the rail lines make their main money from freight and tend to treat passenger service as an annoyance.

It should be noted that this was the authorization bill that passed. The second necessary step is to pass a bill that actually provides the rail money.

The impossible happened this week — the U.S. Senate and House voted overwhelmingly to fully fund Amtrak for the next five years. There’s even some matching money to help states set up or expand rail service.

It’s amazing what four-buck-a-gallon gas will do.

Amtrak’s funding package even got the votes of some of its biggest
critics, like Florida Republican Rep. John Mica, who admitted for
the first time that Americans need some transportation choices.

“Nothing could be more fitting to bring before Congress today, on
a day when gasoline has reached $4.05 a gallon across the United
States on average,” he announced on the floor.

The two houses need to patch over some minor differences in the
bills they passed, but Amtrak backers are confident that won’t be
any trouble.

The biggest trouble, though, may still come from the White House.
President Bush, who has attempted to dismantle the national rail
system throughout his presidency, has pledged to veto the bill.
Fortunately, both the House and Senate passed the funding by veto-
proof margins. Unless Republicans switch because they don’t want
to “embarrass” their president, Bush’s veto will be moot.

Frankly, the president should be embarrassed. His stand on public
transportation has marginalized him on the issue. He continues to
insist that Amtrak should be dismantled and pieces of it turned over
to private companies to run short-line routes. That might work in
highly urbanized areas, but without government subsidies the vast
expanse of America would be left with no rail service of any kind.

But Bush has been far from alone. There has long been a mind-set
against subsidizing rail transportation. Politicians from both sides
of the aisle have never had trouble subsidizing the building of more
and bigger highways and underwriting the cost of airports and sleek
terminals, but when it came to rail, they sang a different tune.

Had we adequately funded Amtrak so that it could have improved trackage in congested areas and run more than one train a day between big cities like Chicago and Minneapolis, for example, the country would today have a reasonable alternative to $4 gas and gridlocked and unreliable airports. We might even have had rail service to Madison.

And now that Congress appears to be finally seeing the light, let’s
hope that Wisconsin does too, and scraps its plans to eventually
spend nearly $2 billion to widen I-94 between Milwaukee and the
Wisconsin-Illinois state line, ostensibly to relieve congestion in
Racine and Kenosha counties.

The DOT has been relentlessly moving ahead with the project despite
an outcry from area citizens that what’s really needed is commuter
rail, which would cost a fraction of what it would take to expand the
interstate.

If ever there was a time not to encourage yet more travel by
automobile, this is it.

Americans are at a point where they’re looking for alternatives. At
$4 a gallon for gas, they’d embrace rail transit if only it were
available. That’s not to mention the environmental benefits that come
from people riding in train cars rather than spewing carbon into the
air while driving and idling in traffic.

It’s beyond time for our governments — federal, state and local —
to come to grips with the future of higher-priced and less-available
oil.