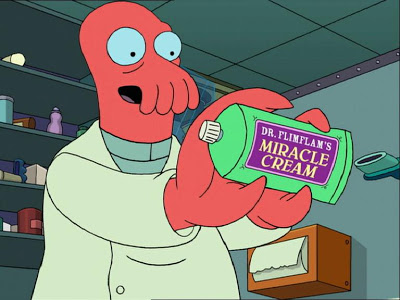 Dr. FlimFlam’s Miracle Cream, as sold by Sen. Max Baucus and the gang. Image of Dr. Zoidberg from Futurama Wiki.

These hearings are pure flim-flam and the Senate will support a ‘health care plan’ largely dictated by the insurance and pharmaceutical industries.

This morning I encountered two seemingly unrelated bits of information that reflect on the current health care debate.

The first item was an AP dispatch from Geneva: the World Health Organization urged drug makers to reserve some of their pandemic swine-flu vaccine for poor countries, but received few concrete offers. The global body wants companies to donate at least 10% of their production or offer reduced prices for poor countries that would otherwise be left without vaccines should there be a sudden surge in demand. But some of the pharmaceutical companies are skeptical about what such a commitment could mean for their business (read: profits).

Second, while reading Bill Moyers’ Moyers on Democracy and came across the following:

“It was just a couple of years ago that controversy erupted over the so-called date-rape drug, Rohynol. Rapists were found to be using it to drug and sedate their victims before exploiting them. Sparked by public indignation, members of Congress moved to designate the drug as a controlled substance, which would have meant stiff penalties for its abuse. Lobbyists for the pharmaceutical industry, which obviously does not condone rape but does oppose regulation that might interfere with its astronomical profits, killed the effort. They smothered it to death with money, big contributions to Republicans and Democrats alike. The money talked and the politicians shut up.”

From this we gain further insight into the workings of both the large corporations and the U.S. Senate. While watching the hearings on health care in Sen. Max Baucus’ committee, I am prone to flashbacks to the days of Huey Long, Boss Tweed, E.H.Crump and James Pendergast. As we have noted in previous articles, these hearings are pure flim-flam and the Senate will support a “health care plan” largely dictated by the insurance and pharmaceutical industries. Unhappily the President seems to be of like mind; at last week’s White House press conference he stood with the enemies of decent health care behind him and spoke out in favor of their totally absurd suggestions, appearing just as sad a figure as Neville Chamberlain appeared at Munich in 1938 when he announced “peace in our time.”

One misunderstanding that needs to be cleared up: both the Senate and White House séances claim that doctors are represented in their proceedings. They refer to the American Medical Association. In reality the AMA is a political lobby which has little to do with the practice of medicine or the conduct of physicians. In the 1930s the Journal of The American Medical Association was one of two publications in this country that published articles written in Germany that espoused the “science of eugenics” — of hereditary racial superiority. In my early days of practice one Dr. Morris Fishbein was the leader of the AMA and a mouthpiece for the most reactionary political causes including the activities of the House Un-American Activities Committee.

Both the Senate and the White House have excluded the true representative physician’s organizations from their discussions, such as the American College of Physicians/American Society of Internal Medicine and Physicians for a National Health Program (PNHP). The only other organization as disingenuous is the AARP, which is a massive purveyor of health insurance.

In the June 1, 2009 edition of The Nation, Vincent Navarro, M.D., PhD, professor of health policy at The Johns Hopkins Medical Institution, writes:

“Without a clear mobilization in the country, such as we saw in the civil rights era, we are not going to see true health care reform. Recommendations to give more money for technology and research and to subsidize premiums for those who cannot pay are extremely unambitious. They do not come even close to the root of the problem: the enormous power of the insurance-industrial complex.”

Time is of the essence, and where is the public outcry? We have seen no spectacular marches, no public gatherings involving those denied decent health care. We have seen small conclaves of those dedicated idealistically to health care for all, the organizers, the workers. Where are the people? Where is the movement reflecting the masses that do not have health care? I do not expect torch carrying multitudes singing “Arise you prisoners of starvation, arise you wretched of the earth,” but it would be helpful to see some of the kind of activity suggested by Dr. Navarro as we stand even now upon the bank of the Rubicon. We have a very short summer in which to succeed.

I fear that there is an American cultural predisposition to accept the status quo. I am reminded of an old motion picture, Charles Dickens’ “Tale of Two Cities,” where in the opening scene a child is run down by an aristocrat’s horse drawn carriage. The situation was accepted as part of life by the peasants standing by. This, in the 1890s was a carryover from the Lord of the Manor/serf oriented society of the 13th Century, where the vassals accepted the Lord’s whims without question. The Lord was supported by the king, the Dominicans and the flagellate friars. Are we faced by a like situation where the disenfranchised, those without health insurance, accept the rule of our corporate society, augmented by the U.S. Senate and the megachurch leaders in Fort Lauderdale, Virginia Beach, and Colorado Springs? Tell me it is not so.

Robert Reich expresses his fear that we are on the verge of losing the battle. Dr. Reich indicates that the President may well have caved in, even on his compromise of “Medicare For All,” in the face of the pressure from the pharmaceutical/insurance/medical supply manufacturers. And David Sirota devotes an article to “Health Care’s Enigma in Chief,” as he refers to President Obama. Obama, it appears, in spite of his earlier pronouncements, has become a health care mystery, struggling to muster consistent positions on the issue.

Meanwhile the general public continues to be flooded by a multibillion dollar avalanche of misinformation relative to health care in Canada and the countries of the European Union. Unfortunately, if critical thinking is informed by what we see on Fox News and CNN, the corporate sponsors of the disinformation may well be way ahead of us, the underfunded folks who try to speak the truth. After all, we are opposed by CRC Public Relations, whose chairman is Lief Noren, a major player in the Swiftboat organization. Perhaps if all the readers of these words were to check out an article from The National Post by Diane Francis entitled “U.S. Health Care Lies About Canada, Greed, U.S.Politics, Dysfunction,” we could do a bit of reeducation among our friends and relatives.

I for one had been hoping that the House of Representatives would seriously consider Universal Single Payer Health care; however, Ralph Nader quotes House Speaker Nancy Pelosi, who responds to a question about health care reform with these revealing and exasperating words: “Over and over again, we hear single payer, single payer, single payer. Well, it’s not going to be single payer.” Mr. Nader fears that the Speaker’s connections to Aetna are showing.

Of course the least expensive program for the U.S. taxpayer is universal single payer coverage. This is graphically pointed out in the April 23 testimony of Dr. David Himmelstein of PNHP, at a hearing on “Ways to Reduce the Cost of Health Care Insurance for Employers, Employees, and Their Families,” before the Health, Labor, and Pensions subcommittee.

As it takes up health care reform the Congress should consider a program of mandated, paid, sick days as is present in every other industrialized nation. The United States is the only nation that fails to provide for an individual who stays home to prevent spread of a contagious illness, and is penalized financially for doing the correct thing. This becomes imperative in view of the potential pandemic of swine flu this coming winter. This is especially important since the United States is probably the least prepared of the Western nations to deal with such a pandemic. Forty million citizens are without a family doctor and our public health systems have been largely neglected since 2001, save for the stockpiling of a far from adequate supply of antiviral drugs.