Consumer Culture and an Insane Society 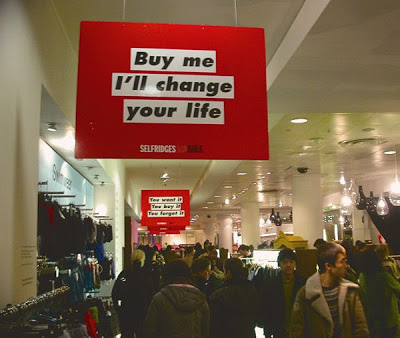 Jdiniytai Damour, a temporary maintenance worker was killed on “Black Friday.” In the predawn darkness, approximately 2,000 shoppers waited impatiently outside Wal-Mart, chanting, “Push the doors in.” According to Damour’s fellow worker Jimmy Overby, “He was bum-rushed by 200 people. They took the doors off the hinges. He was trampled and killed in front of me.” Witnesses reported that Damour, 34 years old, gasped for air as shoppers continued to surge over him. When police instructed shoppers to leave the store after Damour’s death, many refused, some yelling, “I’ve been in line since yesterday morning.”

The mainstream press covering Damour’s death focused on the mob of crazed shoppers and, to a lesser extent, irresponsible Wal-Mart executives who failed to provide security. However, absent in the corporate press was anything about a consumer culture and an insane society in which marketers, advertisers, and media promote the worship of cheap stuff.

Along with journalists, my fellow mental health professionals have also covered up societal insanity. An exception is the democratic-socialist psychoanalyst Erich Fromm (1900-1980). Fromm, in The Sane Society (1955), wrote: “Yet many psychiatrists and psychologists refuse to entertain the idea that society as a whole may be lacking in sanity. They hold that the problem of mental health in a society is only that of the number of ‘unadjusted’ individuals, and not of a possible unadjustment of the culture itself.”

While people can resist the cheap-stuff propaganda and not worship at Wal-Mart, Ikea, and other big-box cathedrals—and stay out of the path of a mob of fundamentalist consumers—it is difficult to protect oneself from the slow death caused by consumer culture. Human beings are every day and in numerous ways psychologically, socially, and spiritually assaulted by a culture which:

Increasing material expectations. These expectations often go unmet and create pain, which fuels emotional difficulties and destructive behaviors. In a now classic 1998 study examining changes in the mental health of Mexican immigrants who came to the United States, public policy researcher William Vega found that assimilation to U.S. society meant three times the rate of depressive episodes for these immigrants. Vega also found major increases in substance abuse and other harmful behaviors. Many of these immigrants found themselves with the pain of increased material expectations that went dissatisfied and they also reported the pain of diminished social support.

Devaluing of human connectedness. A 2006 study in the American Sociological Review noted that the percentage of Americans who reported being without a single close friend to confide in rose in the last 20 years from 10 percent to almost 25 percent. Social isolation is highly associated with depression and other emotional problems. Increasing loneliness, however, is good news for a consumer economy that thrives on increasing numbers of “buying units”—more lonely people means selling more televisions, DVDs, psychiatric drugs, etc.

Promotes selfishness. Self-absorption is one of many reasons for U.S. skyrocketing rates of depression and other emotional difficulties—and self-absorption is exactly what a consumer culture demands. The Buddha, 2,500 years ago, recognized the relationship between selfish craving and emotional difficulties, and many observers of human beings, from Spinoza to Erich Fromm, have come to similar conclusions.

Obliterates self-reliance. The loss of self-reliance can create painful anxiety, which fuels depression and other problematic behaviors. In modern society, an increasing number of people—women as well as men—cannot cook a simple meal. They will never know the anti-anxiety effects of being secure in their ability to prepare their own food, grow their own vegetables, hunt, fish, or gather food for survival. In a consumer culture, such self-reliance makes no sense. At some level, people know that should they lose their incomes—not impossibilities these days—they have no ability to survive.

Alienation from humanity. The priests of consumer culture — advertisers and marketers — know that fundamentalist consumers will buy more if they are alienated from such normal reactions as boredom, frustration, sadness, and anxiety. If these priests can convince us that a given emotional state is shameful or evidence of a disease, then we will be more likely to buy not only psychiatric drugs, but also all kinds of products to make ourselves feel better. When we become frightened and alienated from a natural human reaction, this “pain over pain” creates more fuel for depression and other self-destructive behaviors and harmful actions.

Pain of false hope. The false hope of fundamentalist consumerism is that we will one day discover a product that can predictably manipulate moods without any downsides. Modern psychiatry is a full member of consumer culture. Its “Holy Grail” is a search for the antidepressant that can take away the pain of despair, but not destroy life. In the late 19th century, Freud thought he had found it with cocaine. In the middle of the 20th century, psychiatrists thought they had found it with amphetamines, and later with tricyclic antidepressants like Tofranil and Elavil. At the end of the 20th century, there were the SSRIs, such as Prozac, Paxil, and Zoloft, which were ultimately found to create dependency and painful withdrawal and to be no more effective than placebos. Whatever the antidepressant drug, it is introduced as taking away depression without destroying life. Time after time, it is then discovered that when one tinkers with neurotransmitters, there is—as there is with electroshock and psycho-surgery—damage to life. 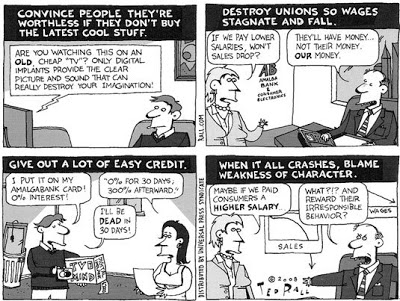 Fundamentalists reject both reason and experience. Fundamentalists are attached to dogma and if their dogma fails, they don’t give it up, but instead resolve to deepen their faith and double down on their dogma.

Erich Fromm, 54 years ago, concluded: “Man [sic] today is confronted with the most fundamental choice; not that between Capitalism or Communism, but that between robotism (of both the capitalist and the communist variety), or Humanistic Communitarian Socialism. Most facts seem to indicate that he is choosing robotism and that means, in the long run, insanity and destruction. But all these facts are not strong enough to destroy faith in man’s reason, good will, and sanity. As long as we can think of other alternatives, we are not lost.”

Breaking free of fundamentalist consumerism means thinking of alternatives and it also means an active defiance: choosing to experience the various dimensions of life that have been excluded by the dogma.

[Bruce E. Levine is a clinical psychologist and author of Surviving America’s Depression Epidemic: How to Find Morale, Energy, and Community in a World Gone Crazy (Chelsea Green Publishing, 2007).]

2 Responses to Consumer Culture and an Insane Society