Continuing Questions About a Coup

From Healing Iraq, with an excellent accompanying map of the current situation in Baghdad from an Iraqi perspective. 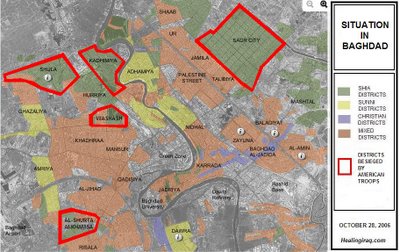 Baghdad is rife with the strangest rumours again chiefly as a result of the latest deployment of American troops around major Shi’ite districts in Baghdad, signaling a movement against Shi’ite militias. The rumours also seem to have penetrated the concrete barriers of the Green Zone where anxious Iraqi governmental officials are whispering about an impending American “coup,” and according to some well-connected Iraqis inside the Green Zone, several officials have made travel arrangements. This followed tensions over the last week between the U.S. and a defiant PM Maliki that were supposedly resolved yesterday with the joint Iraqi-American statement reaffirming U.S. support for the Iraqi government and the commitment of the Iraqi government to a timetable for disbanding militias. The heavy deployment of American troops along with elite Iraqi security forces that are not part of the Interior or the Defense ministries aggravated these fears.

Read all of it and more here.