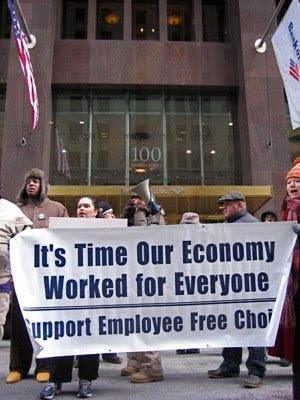 Where’s the Goddamn Outrage! When it Comes to National Labor Law We Have a Corporate Crime Wave
By Dave Lindorff / May 21, 2009

A new study of 1004 union organizing drives conducted by the director of labor education research at Cornell University’s School of Industrial and Labor Relations has found that two-thirds of the companies involved were violating US labor law by holding one-on-one interrogations of workers, by threatening workers about their union support, by firing union organizers or using half a dozen other illegal tactics to defeat unionization campaigns.

Prof. Kate Bronfenbrenner, author of No Holds Barred: The Intensification of Employer Opposition ot Organizing, says that these illegal tactics by employers have been used to drive union representation at American companies down to only 12.4 percent from a level of 22 percent just 30 years ago.

If a similar level of illegal behavior by companies was reported dealing with, say, false billing of customers, deceptive reports to shareholders or violation of environmental laws, there would be a clamor for action in Congress, and among the public, but so far, there is no outcry over this wholesale violation of the nation’s labor laws.

One reason may be because nobody except the unions themselves and the companies breaking the law would know about this particular corporate crime wave.

The only article I’ve seen on this study was published by the New York Times, but it was run in an inside page of the Times business section, which is largely ignored by most readers.

Why would an article about workers be consigned to the business pages? Is it only of interest to businesses and investors? Surely not. The author of the piece, Steven Greenhouse, one of the nation’s last journalists to actually have a labor beat, is a fine reporter, and writes his articles not in business jargon but in a style that would be easily understood by anyone who could read. His article, headlined “Study Says Antiunion Tactics Are Becoming More Common,” surely belongs in the front section of the newspaper, and in fact, given its shocking evidence of rampant criminality on the part of employers on a national scale, should be on the front page of the paper if editors were applying honest news judgement (How many people are impacted? How new is the information? How dramatic is the new information?).

But a second reason may be that unions themselves are doing a poor job of getting the story out.

Right now the US labor movement is desperately trying to win passage of the Employee Free Choice Act, a bill which, if passed as currently written—a long shot at this point—would address some of the issues raised in Prof. Bronfenbrenner’s study by eliminating the need for secret ballot unionization votes. Those elections, companies and their labor-busting lawyers have long ago learned, can be delayed for years while they illegally whittle away at union support. But because the unions are trying to keep the support of a wavering President Barack Obama and of Democrats in Congress for passage of EFCA, in the face of massive lobbying by big business interests, they are avoiding the kind of street politics that would make this corporate crime wave a big story.

What should be happening is mass marches in the nation’s cities, and especially in Washington, demanding action on EFCA. President Obama and most Democrats in both Houses of Congress, all campaigned saying they backed EFCA, but now many are backing away from that promise.

A million angry workers massed and shouting on the Washington Mall would stiffen their spines, as would big demonstrations in the major cities of the country.

Mass action would also force the media to look at the way companies are simply thumbing their noses at the nation’s labor laws, which outlaw intimidation of workers, outlaw firing of union activists, and guarantee free elections on the issue of whether to have a union at a workplace.

Of course, a third problem is that American workers have long been quiescent on the issue of labor unions. Polls show that a majority of Americans would like to have a union where they work, but very few of us seem willing to fight for that right. Maybe with polls showing that over 50 percent of Americans now worry that they may be laid off, and with companies clearly using the economic crisis as an excuse for bashing employees, that quiescence is ending. The only way to find out is for the labor movement to call for street action.

This is no time to be polite with politicians, and no time to limit political action to writing email letters, signing petitions and making phone calls.

This is a time to call out the corporate managers who are treating the labor laws like so much toilet paper—a time for boycotts, for marches, and for sit-ins.

Pass the ECFA, as written, with no compromises!

[Dave Lindorff is the author of Killing Time: an Investigation into the Death Row Case of Mumia Abu-Jamal. His new book of columns titled “This Can’t be Happening!” is published by Common Courage Press. Lindorff’s new book is “The Case for Impeachment,” co-authored by Barbara Olshansky.]