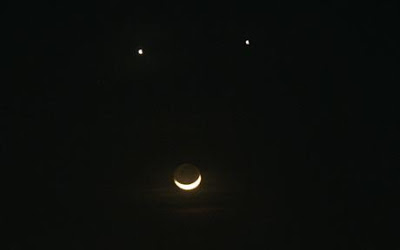 A rare positioning of planets Venus (top left) and Jupiter (top right) and the crescent moon of the Earth provides a “smiley” effect that captivated Asia Monday night Dec. 2, 2008. Photo by AP.

The next time the moon, Jupiter and Venus will be as close and visible as this will be Nov. 18, 2052.

Smiling down from the heavens are the three brightest objects in the night sky – Venus, Jupiter and a crescent moon.

Over the last week the two planets moved closer together so that they appeared no more than two degrees apart, which equates to a finger’s width when held out at arm’s length.

As they were joined by the moon on Monday night photographers around the world – from Bangkok to Kenya – captured the image.

“This certainly is an unusual coincidence for the crescent moon to be right there in the days when they are going to be closest together,” said Alan MacRobert, senior editor of Sky and Telescope magazine.

The three celestial objects come together from time to time, but often they are too close to the sun or unite at a time when they are less visible.

The next time the three will be as close and visible as this week will be Nov 18, 2052, according to Jack Horkheimer, director of the Miami Space Transit Planetarium.

Two out of three – Venus and the crescent moon – will again be in close proximity on New Year’s Eve, Mr MacRobert said.

This entry was posted in RagBlog and tagged Astronomy. Bookmark the permalink.