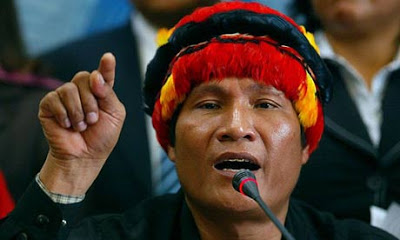 UPDATE: See ‘Peru: 60 dead as Garcia Regime sends police to attack indigenous road blockade,’ at Axis of Logic, with photos like the ones below. 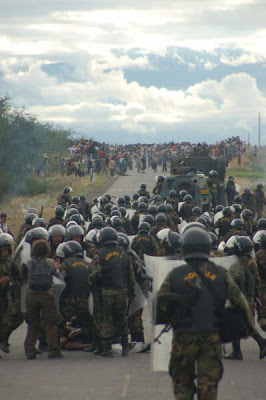 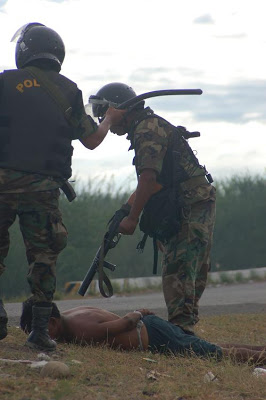 Alberto Pizango was charged with sedition following protests in the Amazon rainforest which turned violent.

A Peruvian indigenous leader has sought asylum in Nicaragua’s embassy to escape sedition charges over anti-government protests in the Amazon which turned bloody last weekend.

Alberto Pizango, a leader in a campaign against oil and mining projects in the rainforest, slipped into the Nicaraguan embassy in Peru’s capital, Lima, after an arrest warrant was issued on Saturday.

Meanwhile in the jungle hundreds and possibly thousands of Awajun and Wambis Indians hid from security forces who were retaking control after two days of mayhem which left dozens dead, including 23 police. Dodging a military curfew and round-ups, many protestors trekked back to remote villages.

Indigenous leaders said at least 40 protesters were killed, including several children, and alleged that security forces dumped other victims in mass graves and rivers to conceal the extent of the crackdown.

“The government appears to be destroying the bodies of slain protesters and giving very low estimates of the casualties,” said Gregor MacLennan, of the advocacy group Amazon Watch, from the flashpoint town of Bagua.

Indigenous leaders said violence flared when police, including some in helicopters, opened fire last Friday on thousands of protesters who were peacefully blocking a road in Bagua, 870 miles north of Lima.

Authorities confirmed only nine indigenous protesters dead and rejected claims of cover-up. There are graphic images of dead and wounded protesters but so far no strong corroboration of accounts of mass graves or corpses being burnt and dumped. A government TV campaign portrayed protesters as barbarians who slaughtered “humble” police with spears and bullets.

The Andean country’s worst violence in a decade has left a question mark over the fate of billion-dollar deals with foreign multinationals, including the Anglo-French oil company Perenco, to extract oil, gas and minerals from the rainforest.

Indigenous leaders said they would continue a six-week-old campaign to block roads, waterways and pipelines to protect ancestral land.

President Alan Garcia, who has pushed for free trade deals with the United States and European Union, said the Amazon’s wealth belonged to all 28 million Peruvians, not just a few hundred thousand Indians. He hinted, without furnishing evidence, that the leftist governments of Bolivia and Venezuela had fomented the trouble.

The Catholic church urged the government to suspend the controversial decrees which opened the Amazon to multinationals.

“This was a disaster waiting to happen,” said Archbishop Miguel Cabrejos. “The indigenous peoples have been forgotten. We must listen to them.”