Crassnerd From the Front Lines 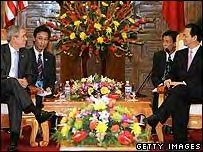 According to sources at the early morning meeting, Bush was escorted into a small room off the main meeting hall, where a virtual cornucopia of cut flowers surrounded a casket labeled, “American hegemony in Asia 1800s – 2006”. Alarmed embassy staff said it apparently took the good-natured Bush most of the 45-minute ceremony to realize the event was not a joke, at which time he called for his security detail, which found itself locked out of the meeting and unable to enter.

But Singapore President Muhammad Olbliquar quietly suggested to Bush that translators could be of more use.

“Let us be clear,” said Obliquar. “The world economy runs on oil. China pays generously for oil and gets it; you bomb and kill for oil, and yet you still end up empty-handed, impoverishing your allies and your citizens while enriching your enemies. It therefore makes more sense for us to be your enemy — or at least not your ally — than it does to side with you.”

Taken aback, the US president initially tried to argue his case for “fighting for the petroleum we need,” said meeting attendees. “Cheney says I’m on the right track, and oil company profits are through the roof,” said Bush. “The old paradigm of conquer, steal, and sell is gone,” said Bush. “Today the oil we keep off the market by trashing oil producing nations has doubled the value of the oil we are able to actually get. It works for Exxon, and what works for Exxon works for us,” said Bush.

Obliquar, who said he apparently was designated to try to educate the US president about the waning influence of the US on Asian nations now hewing closer to China said, before he began addressing Bush again that he thought he was chosen to do so mainly because “my city-state is too small to be targeted accurately by US airborne munitions.” He then went on to deliver more bad news to Bush.

“All the Asian nations who want stability are becoming closer to China, and distancing themselves from a nation that seems not to have learned the lessons of even its longest war, held, incidentally in our back yard,” said Obliquar.

For example, said Obliquar, “You said on Thursday that the lesson of your Vietnam war for your Iraq war was that you would win in Iraq if you did not quit, that makes many people think you believe that had you only stayed twice as long and killed twice as many of our people, you might have won. Even if that fantasy were true, the fact you would say it in a land where you escaped being an imperial war criminal only through cowardice, not conviction, would make anyone question your judgement,” the Singapore leader said.

“Moreover, we have real concerns about US money value,” Obliquar said. “China’s money is backed by the value of the countless barrels of oil and oil futures it controls, bought with the prized Chinese yuan and with oil-for-oil-production infrastructure deals with its oil-rich friends, such as Hugo Chavez and the Africans. But US money is good only as long as China loans it to you. Your money is backed only by China’s good will and kindess. And its cleverness.”

“Bush, why do you think the Chinese have never objected to your war against Iraq — never said so much as one word against it?” sources said Obliquar asked the by-the-shocked US president, who had been guiled into the meeting by hotel staff who told him he could catch 30 minutes of the Ohio State-Michigan football game on cable TV, and would not be missed at the APEC summit.

“It’s because China has known that all the money it loaned you to pay for the war would never be used to build US production capacity, and instead would be utterly wasted. Yet China now finances your economy to such a great extent by buying your treasury bonds that if it were to slow down buying your bonds, or heaven forbid, begin to sell those bonds, your dollar would lose enormous value in very short order.”

“Which, quite frankly, has become the largest single reason they buy your bonds,” added Obliquar.

“Given that,” Obliquar asked Bush, “how could you ever meaningfully oppose big-difference items that China supports? Or get support from us for what China opposes, such as boarding North Korean ships to search them for weapons,” Obliquar asked.

“After all, China can protect us from North Korea — and will do so — but you cannot,” sources said Obliquar told Bush. “You are too far away, your military is tied up in a quagmire like your previous one, from which your nation seems to have learned something, but from which your leadership has not.”

“You cannot even protect us from China, which hasn’t grown outside its borders in 600 years, incidentally, but China can protect us from you and your once-ever-widening reach,” noted Obliquar.

Obliquar ended his solliloquy, according to sources at the ceremony, by thanking Bush for listening, and presenting him with a tape of the talk. “If you have any trouble understanding what I’ve just said, ask Karl Rove what it all means,” suggested Obliquar.

After the ceremony, Obliquar was heard telling Bush that Vietnamese officials had expressed concern about the Bush team hotel bill. “If you could settle up on that hotel bill — including the bill for the next few days ahead — before you have any more meetings with the Chinese delegation about North Korea, I know the hotel owners would greatly appreciate it,” said Obliquar.

Sources at the summit said that when the US security team caught up with the president shortly after the meeting, Bush seemed dazed and confused, and asked immediately that a key piece of information be determined by intelligence sources and relayed to him as soon as possible.

“I really, really, need to know,” said Bush, “who won that NCAA game.”

Told the game actually would not be played until the following day, Saturday, Bush was visibly agitated, but his reply could not be heard, as the security team hustled him back to the main meeting.

Later, Chinese officials announced the largest-ever single purchase by China of 10-year US Treasury notes, an amnesty plan for Taiwanese nationalists, and the lend-lease to North Korea of swifter, larger cargo ships to ply the trade routes between Pyongyang and Karachi, expected ultimately to bring North Korean cash from unspecified technology transfers to Pakistan and Iran into Chinese coffers.

Sources reported that on Saturday, the US president was able to learn the outcome of the Ohio State-Michigan football game, and considered the APEC summit “an unqualified success.”