Crowded Classrooms and Crowded Prisons – Why Is It So Hard to See the Connection? 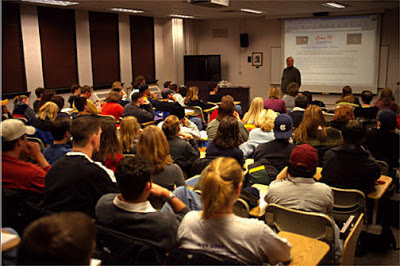 One in thirty one.

As a public school teacher I am quite familiar with this figure — it’s a typical teacher to student ratio in the classroom. But now that proportion has taken on new significance: A report released on March 2nd by the Pew Center on the States found that one in every thirty-one adults reside in the US corrections system — now totaling some 7.3 million people.

That means roughly one student per classroom in America will end up in prison, on parole, or on probation.

As New School Foundation board member Lisa Fitzhugh notes in her January 19th Seattle Times op-ed, states like Washington even determine how many prison cells to build based on 4th grade reading scores and graduation rates. So rest assured, if your 9-year-old stumbles over syntax or has trouble sounding out the word “priorities,” the state has readied the necessary cellblock accommodations. Why flush money down the sinkhole of reading improvement teachers when there are solitary confinement cells to be built? As the Pew study reports,

“In the past two decades, state general fund spending on corrections increased by more than 300 percent, outpacing other essential government services from education, to transportation and public assistance. Only Medicaid spending has grown faster. Today, corrections imposes a national taxpayer burden of $68 billion a year.”

In Seattle, where I teach, our politicians have magnified this absurdity by simultaneously proposing two pieces of public policy:

1) Mayor Greg Nickels has proposed the construction of a new municipal jail, projected to cost taxpayers over $200 million.

2) Seattle’s School Board voted recently to close five schools and disrupt or discontinue eight other programs.

If you like these policies of planning prison construction based on elementary reading levels, and of closing schools while opening jails, you might consider a couple of other equally rewarding ventures: smashing holes in your boat and investing in buckets to bail out the water, or, equally clever, slashing holes in the tires of your car and subsequently investing in tire patches.

How do we end this illogical, anti-hope scenario and reverse increases in prison spending?

After years of deregulation and outlandish speculation that caused an implosion of the economy, many politicians and corporate heads are venturing out of their boardrooms to examine the rubble at “Main Street Middle School.” Realizing something must be done, they tout their education schemes as “school reform”—including paying teachers according to culturally biased/curriculum narrowing tests their students take, the breaking of teachers’ unions, and the privatization of education through charter schools.

But in an era when CEOs and bankers sabotage the economy and then get to float to the ground on golden parachutes worth tens of millions of dollars, it’s unclear how merit pay for teachers would be structured—in this new age, would it mean that the more students who flunk the test, the bigger bonuses teachers get?

Given the current free market meltdown, they can’t really believe that our public schools are better off following the laissez-faire predisposition for privatized charter schools run by CEOs.

A genuine first step on the path to improving education should center on what teachers, students, and parents have known for a long time: class size matters.

Unfortunately, this common sense approach missed Mayor Bloomberg who was quoted in the New York Times on February 22nd giving his explanation of how to improve education: “It’s the teacher looking a child in the eye, and teachers can look lots of children in the eye,” he added. “If you have to have smaller class size or better teachers, go with the better teachers every time.”

I’ll go for option C: The skilled teacher with the smaller class.

While proven to help, lower class sizes are not popular with the guardians of the bottom line because training and hiring more teachers costs money. I should admit I am not a trained economist like the financial intellectuals who managed asset-backed securities at AIG. However, I feel qualified to assert that unlike the purchase of collateralized debt obligations, spending on our children is a sound investment—morally and financially.

The American Economic Review, one of the longest running journals in the field, recently released a study revealing that only “A one percent increase in the high school completion rate of all men ages 20-60 would save the United States as much as $1.4 billion per year in reduced costs from crime incurred by victims and society at large.”

Having missed this statistic, states across the country are reacting to the financial crisis with school closures and teacher layoffs. While some of the largest districts have postponed massive layoffs for now, recently the Los Angeles Unified Schools threatened 2,300 teachers with pink slips and New York City Schools said they could lay off 15,000. The Seattle School District is planning to terminate or disrupt 13 schools, and Chicago is shuttering 16 of its own. Federal stimulus dollars for education will help ease some of the cuts, but politicians—from governors to local school officials—have promised closures and layoffs nonetheless.

Activists in Seattle, however, are working on an alternative lesson plan for our city that may prove to be a model for saving schools and halting jails.

Representatives from all the schools slated for closure and other community members have formed ESP Vision: Educators, Students and Parents for a Better Vision of the Seattle Schools—rallying hundreds against the school closures, teaming up with the local NAACP to help parents file over 200 grievances with Department of Education, and assisting parents in a formal appeals process to block the closures. Moreover, ESP Vision has teamed up with the Initiative-100 campaign that is attempting to block the building of a new city jail by collecting the 23,000 signatures needed to put its construction to a vote.

Mark Twain once said, “Every time you stop a school, you will have to build a jail. What you gain at one end you lose at the other. It’s like feeding a dog on his own tail. It won’t fatten the dog.” While Twain leaves us with a distasteful image, far more repugnant is a social order that invests in metal bars rather than in cultivating our children’s talents.

[Jesse D. Hagopian is a teacher, education journalist, and a co-founder of ESP Vision: Educators, Students, and Parents for a Better Vision of the Seattle Schools (espvision.org). He can be reached at: jdhagopian@gmail.com.]

1 Response to Crowded Classrooms and Crowded Prisons – Why Is It So Hard to See the Connection?