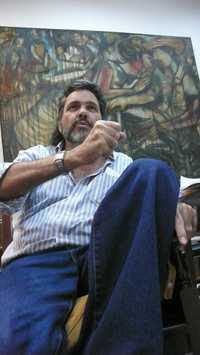 Cuba’s Minister of Culture Abel Prieto in Havana during an interview he granted La Jornada. Photo: Pablo Espinosa.
Cuba urges artists to be critical in order to defend the utopia, Abel Prieto says
By Pablo Espinosa

This analytical spirit is often in line with our efforts to eliminate the very bureaucracy we have created, holds the Minister of Culture. We have managed to turn our capital city into a great art gallery, he tells La Jornada.

HAVANA — Cuban Minister of Culture Abel Prieto stated in no uncertain terms that using art to criticize the system is indeed a revolutionary action nowadays. “We encourage the kind of critical, reflective art that helps find out where we go wrong and defend the utopia. When criticism is exercised from a position of commitment to the country, the outcome can be really productive”.

Interviewed by La Jornada a week into the 10th Havana Biennial, the senior official offers a preliminary assessment, speaks about sensitive topics and stakes out new directions for Cuban culture.

Q: What would be a preliminary assessment now that the 10th Biennial is in full swing?

“We are quite satisfied. A major goal has been met: turning Havana into a great art gallery. It’s a principle of our cultural policy to outsmart and democraticize any elitist approach to art. Still, our institutions are weak in the face of talent, whose strength, energy and demanding nature are beyond our real institutional ability.

“That we sometimes find ourselves crippled to operate by financial problems and a marked lack of resources is a crude reality we can’t deny. When you add it all up you realize this Biennial was put together cent by cent and working wonders. Some friends who know about it told us, ‘Hey, you need millions to organize a thing like this’…”

A FORUM OF RADIATING POVERTY

“This is a biennial of poverty,” Abel Prieto continues, “of radiating poverty, like [late Cuban writer José] Lezama Lima said, and I mean it as a good and positive quality.

“And it’s precisely the field of visual arts where we are worst stricken, because our institutions lack the financial means to put artists on the great market.

“However, artists like Kcho, for instance, acknowledge that the Havana Biennials have been a launch pad for the main Cuban artists in the last 20 years.”

Q: Is it in the nature of this Biennial to promote alternatives to a market-oriented art?

“One of the Biennial’s principles is to provide a choice to dealership and the frequent occurrence of fraud, since some works receive a lot of publicity and become highly successful even if they have almost no artistic value.”

Q: How significant is the presence in this Biennial of U.S. artists and their works of political criticism?

“It puts symbolic pressure on Obama’s government and its hostile blockade and policy. There’s a whole movement of artists and cultural representatives in the U.S. who oppose any barrier to cultural exchange, even powerful people who hold important positions in show business.

“Unfortunately, as you know, Joe Biden said a few days ago that the blockade will remain. We expect no big changes in the U.S. policy on Cuba, but at least the exhibition Chelsea visits Havana raises a symbolic flag after years of silence under Bush. Many U.S. actors used to come before, such as Jack Nicholson, Robert de Niro, Steven Spielberg, etc. The Cuban National Ballet traveled every year to the States, and so did the music group Los Van Van. At a disadvantage, of course, since neither [Cuban prima ballerina] Alicia Alonso’s company nor [Cuban singer and composer] Juan Formell’s band could be paid for what they did, a drawback to the Cuban artists but a cultural exchange after all.

“There was a Havana Biennial attended by three thousand American artists. Bush nipped that in the bud by denying them further visas. He even had the passports of Irakere’s founder Chucho Valdés and Los Van Van’s director Juan Formell stamped with an insane caption that says something like they are dangerous to the national security of the United States. That’s how far he took his paranoid hatred.

“That’s why Chelsea visits Havana is such an important exhibition: it’s a first for U.S. culture in the post-Bush era. Here in Cuba we always stress the fact that we feel no contempt for the American people or their artists, quite the opposite.”

Q: An outstanding fact of this Biennial is the presence of the Cuban artist Tania Bruguera with her Cátedra de Arte Conducta (Studies in the Art of Behavior), made up of very young figures whose work levels harsh criticism at the Cuban system. Is that openly critical spirit encouraged or tolerated?

“A critical, analytical art that rekindles society’s time-honored, avant-garde spirit of changing things, people and the environment is visible not only in Tania’s project, but in general among our young artists.

“It’s a healthy thing, this criticism from positions of commitment to the Revolution which is very often in line with our efforts to be more efficient and eliminate the bureaucratic snags we have put up ourselves.”

Q: There are works in this Arte Conducta Workshop where Fidel Castro is portrayed as one of those plush animals you can “fish” for some coins from vending machines in shopping malls and the glorification of Cuban athletes is shown to be nothing but an utilitarian tendency to treat them like objects. Is that also a tolerated or a fostered practice?

“Those artworks sprung from Arte Conducta have a demystifying purpose which proves very attractive to young artists. But there’s a downside, like the provocation on Sunday evening during Bruguera’s performance when this famous bloger-girl Yoani Sánchez took the microphone and made a speech against the Revolution. She said the Internet was a chink in the wall of Cuban censorship.

“She talked about something we deem important: to provide a proper framework to receive that kind of art. But it happens that we in Cuba are under constant surveillance by a media bent on distorting reality on a regular basis. The Sunday events were used by unscrupulous individuals and the Florida-based newspapers.

“That’s one of the topics addressed by this critical art in Cuba, which we promote in order to fuel reflection and pinpoint our flaws, so that it helps us defend the utopia.

“When you exercise criticism as Tania Bruguera does, from a position of commitment to the country, the outcome can be really productive.”

This entry was posted in RagBlog and tagged Artists, Cuba, Public Art. Bookmark the permalink.