Cuba: Still Much More Concerned with the Things That Truly Matter 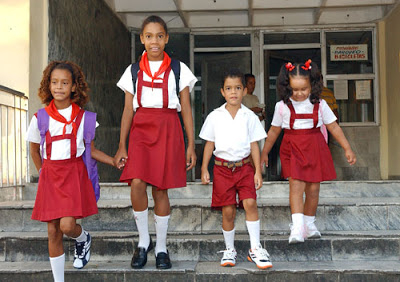 CUBA: Shoring Up the Educational System
By Patricia Grogg / August 29, 2008

HAVANA, Aug 29 — In the new school year, which begins next Monday, Cuba’s educational system will be trying out several changes aimed at overcoming the decline in the quality of teaching, blamed on a shortage of teachers and other problems.

“I am waiting to see what happens. My daughter begins secondary school now, and if she doesn’t get good teachers and her grades drop, I’ll have to find another school or pay for private tutoring. These are the most difficult years,” a Cuban journalist who asked to remain anonymous told IPS.

This week, Education Minister Ena Elsa Velázquez said there would be more teachers on the payroll this year. A shortage of more than 8,000 teachers, identified as one of the most pressing challenges facing the educational system, has begun to be reduced as a result of the return to the classroom of retired teachers.

Velásquez said that 4,948 retired teachers were returning to work, under a decree issued in mid-July by President Raúl Castro. The emergency measure offers retired educators the opportunity to continue drawing their pensions while teaching and earning a full-time salary.

“There will be 235,943 teachers working this year, 32,070 of whom are teachers-in-training. The exodus is 30 percent lower than last year, with nearly 2,000 fewer teachers filing for retirement,” said the minister, as reported by the local press.

Velázquez also announced that teachers would be given more time to prepare their classes. “That was sorely needed. Now we can also dedicate more time to studying,” Kruskalia Masa, a 45-year-old primary school teacher, commented to IPS.

In her view, the quality of teaching in Cuba has gone down because teachers are given very little time to prepare their classes, a problem that only worsened as the number of educators shrank. “In addition, we will now have more assistants, who obviously don’t replace teachers, but do provide support for their work,” Masa added.

A report by the education minister on performance in the 2007-2008 school year states that among the main challenges that students in the first few years of secondary school must overcome are difficulties in spelling and writing, and poor reading habits.

Veláquez was named education minister in April after the sudden removal of Luis Ignacio Gómez, who headed the ministry for 18 years.

“He had lost energy and revolutionary consciousness,” wrote ailing former president Fidel Castro in a column in which he backed Gómez’s replacement.

The deterioration of education, especially due to the shortcomings of the teachers-in-training system, courses taught by video, and distance learning courses offered on television, was a frequent complaint voiced in the popular debates called by Raúl Castro in a key Jul. 26, 2007 speech, when he was still acting president.

Such criticism was also voiced at the 7th Congress of the Union of Writers and Artists of Cuba (UNEAC) in April, by intellectuals like Alfredo Guevara, one of the veteran cultural leaders of the Cuban revolution.

“Can our primary, secondary and prep schools properly educate children and adolescents and thus lay the foundation for the future as they are at present, governed by misconceived criteria and practices that ignore elementary pedagogical and psychological principles and violate family rights?” he asked.

During the congress, which was held behind closed doors, Guevara also reportedly warned that the teacher-in-training programme has produced “young student teachers whose training is lacking and incomplete and whose maturity level is far short of what it should be.”

Teachers-in-training are used to complete the teaching staff of schools, which have also been equipped with TV sets, VCRs and computers as learning aids. The changes introduced include a reduction of video classes to half an hour, with 15 minutes left for the teacher to provide explanations.

“Television is a support for teachers, it should not replace us,” said Masa, who stressed that “a sense of vocation and dedication” are indispensable in her profession. “Unfortunately, the mass training of young people as teachers does not ensure that they all have these two qualities,” she added.

In the plans for the new school year, the main task of retired teachers who return to the classroom will be to supervise and advise the young teachers-in-training.

In Masa’s view, that is an “essential” step towards strengthening education in Cuba.

Education, which has been universal and free in Cuba since the 1960s, is considered one of the main accomplishments of the 1959 revolution. But like other sectors in Cuba, it was unable to escape the impact of the severe economic crisis that hit Cuba in the wake of the collapse of the Soviet Union and East European socialist bloc.

Nevertheless, in the latest study on scholastic performance carried out by the Latin American Laboratory for Assessment of the Quality of Education (LLECE), which is coordinated by the United Nations Educational, Scientific and Cultural Organisation (UNESCO) regional bureau, Cuba was found to have the highest performance levels among the 17 nations studied in Latin America and the Caribbean.

In the study released in June, “Student achievement in Latin America and the Caribbean; Results of the Second Regional Comparative and Explanatory Study (SERCE)”, Cuba was the only country whose third-grade pupils attained math and reading scores more than one standard deviation higher than the regional average, that is, over 100 points above the 500 points representing the average of all the countries studied.

The Cuban government allocates a sizeable sum of the national budget to maintain the Social Security and Welfare System for its aging population.

TODAY, SIXTEEN PRECENT OF THE POPULATION IS 60 OR OLDER.

Neither of the two spheres lacked financial support during the economic crisis that besieged Cuba following the collapse of Socialist Eastern Europe and the economic hardships of an intensified US blockade. Far from diminishing, the budgetary allocations for the two continued to grow. In 2007, for example, their combined expenditures equaled 10.56 percent of the Gross Domestic Product.

The system currently in force offers protection to workers and their families and to the population in general. It covers risks and contingencies: industrial accidents, diseases, disability and maternity, death of workers, welfare, and old age.

According to statistics from the Ministry of Labor and Social Security, there were 1,133,229 Social Security beneficiaries in 1990. At present, the figure of retirees alone is close to 1.6 million. Welfare is similarly on the rise.

Increased outlay is also due to the government’s decision to increase the still depressed incomes of retirees and other families receiving financial assistance. Thus, between 2004 and 2008, minimum Social Security and Welfare pensions increased 3.6 and 2.4 times, respectively.

It would be hard to find anyone in Cuba who differs on the need to continue raising pensions, but how can such huge expenditures be maintained or increased?

Today, 16.6 percent of the population is 60 or older and by 2050 this ratio could go over 30 percent. Aging, along with the notable decrease in birthrate would lead to having, in 2025, approximately 770,000 less people in the work force as compared to the present, if by then the norms established in the Social Security Law currently in force have not changed.

The reduction in the number of citizens in the work force (producers of good and services) and at the same time the increase of pensioners due to age is not a new problem. Cuba has been facing this for several decades now: in 1980, more than 238,000 young people arrived at working age, and during 2007 the figure dropped to approximately 166,000 as a result of the constant reduction of the birthrate. If this trend continues, under the current legislation more people could retire in a single year by 2020, than those incorporated into the work force.

It’s impossible to maintain such an imbalance. Therefore, the proposal to increase the retirement age and the years of service to deserve it, is part of the multiple alternatives the government is considering to achieve a better use of the country’s human resources. Otherwise, it would be harder for the Cuba to achieve greater economic development, which is the only way to continue supporting its high social expenditures, among them those of Social Security and Welfare.

The Cuban government will never negate its responsibilities. Neither budget cuts nor the privatization of social security —applied in many countries taking neo-liberal recipes as a starting point— will be resorted to here. Huge expenditures in the two spheres will continue to come from the wealth the working population is capable of creating. In this regard, the new Social Security Law, presently a bill, will now be discussed by workers throughout Cuban society. This, at a time when better organization and labor discipline are needed, as well as expanding payment systems according to results, coupled with increasing productivity and more rigorous management practices.

This entry was posted in RagBlog and tagged Education, Latin America, Social Action. Bookmark the permalink.