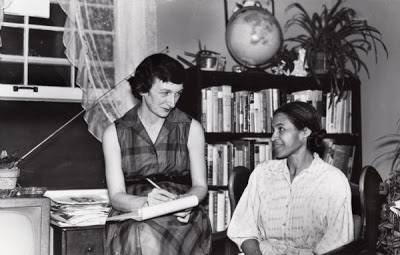 Rosa Parks Interviewed by Anne Braden. Photo from Wisconsin Historical Images.
The many fronts of the culture wars


The Van Jones resignation has particular meaning for people like me with life experience in the coalfields, where the exploitation of land and people by the coal industry is made even more brutal by the dichotomy between jobs and the environment.

“Use every attack as a platform…” — Anne Braden

Ask anyone involved in black liberation, peace, gay rights, environmental justice, welfare rights, anti-poverty, or the women’s movement. All of us heard others attacked, if not ourselves, as socialists or communists. Those words were used to distract us, to divide us, to marginalize us, and to destroy effective leadership.

I’m currently working on a film about Anne Braden. Anne Braden had a great deal to say about anti-communism. She put her body and her mind into the struggle for black liberation, beginning in 1951 when she led a delegation of white women to Mississippi to protest the legal lynching of Willie McGee. She said, “We are here because we are determined that no more innocent men shall die in the name of white southern womanhood.”

In 1954, Anne Braden and her husband Carl bought a house for a black couple in a white suburban Louisville neighborhood. The house was fire bombed. In the midst of white backlash against Brown v. Board of Education, the local prosecutor charged the Bradens and five other white progressives with “sedition” for fomenting strife between the races as part of a communist plot. Carl was convicted and sentenced to fifteen years in prison.

Anne Braden and the other defendants traveled across the country to tell the story. They succeeded in freeing Carl at least temporarily. They raised up the issues of open housing and integration. They found new allies and forged a greater unity. When Carl was once more sent to prison for his ideas, Dr. King headed a petition drive for clemency. Please go here for excerpts from the film in progress.

The Van Jones resignation has particular meaning for people like me with life experience in the coalfields, where the exploitation of land and people by the coal industry is made even more brutal by the dichotomy between jobs and the environment.

Last spring, Van Jones told the Ohio Valley Environmental Council, a grassroots environmental group, that Appalachia would be a focus for green jobs. In another statement, Van Jones said, “This movement also has to include the coal miners.” He went on to compare “clean” coal to “unicorns pulling cars.” Jones united environmental and economic justice in terms that working people understand. This unity, reflected in coalitions like the Blue Green Alliance and the Apollo Project, is critical to our movement.

In 1984, I documented a coal strike against A.T. Massey Coal in the area around Matewan. Please go here for a stream of the documentary. I interviewed now CEO Don Blankenship, listed on AlterNet as one of “the 13 scariest Americans” for his destruction of the mountains, denial of global warming, and attempted corruption of the Supreme Court of West Virginia.

It’s ironic that Don Blankenship was conducting a gala Labor Day event at the same time that Van Jones resigned his position. In Holden, West Virginia, to an estimated 75,000 supporters of coal, Blankenship blasted any attempt to control climate change stating, “Only God can change the earth’s climate.”

“Mine War on Blackberry Creek” and the Anne Braden project are produced with Appalshop, an arts and education NGO supported throughout its forty year history by the National Endowment for the Arts. 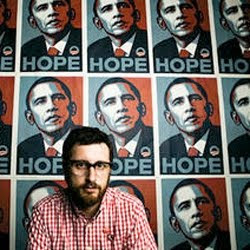 Another Glenn Beck victim: Yosi Sargent. Photo from SF Gate.
On September 10, Yosi Sargent was removed from his office as Communications Director at the NEA. Glenn Beck attacked both Sargent and the NEA as “Nazi” propagandists, based on tapes of a conference call asking artists to participate in Michelle Obama’s “United We Serve.” (I wonder what Glenn Beck would say about art created in the WPA, which brought us Jackson Pollack as well as Ben Shahn and Russell Lee.)

Sargent brought hip-hop, street artists, and grassroots arts groups to the White House. The attack against him smacks of racism and homophobia and commercialism. And so the culture wars begin once more.

We’re used to fanatic attacks on the National Endowment for the Arts spearheaded by the American Family Association. The American Family Association not only inflict on us their views on “decency,” they lobby against regulation of the oil industry, against hate crime legislation, and against the Employee Free Choice Act. And so attacks against culture and economics combine in a dangerous mix with religion.

McCarthyism was far from over when McCarthy was condemned by the U.S. Senate in 1954. It wasn’t over in 1975 with the disbanding of the House Un-American Activities Committee. Assaults on affirmative action, the rise of the Klan and other neo-fascist organizations, Reaganomics and its assault on the working class, welfare deform, the killing of doctors who perform abortions – we really haven’t had a break. These attacks are cultural and ideological as well as economic.

Universal health care is a human right. No human being is “illegal.” Separate but equal is never equal. Young people should be treated with gentleness. The sick elderly should be cared for with dignity. Everyone should have adequate food and housing. The earth must be treated with respect or we will have no clean air to breathe or water to drink. Women have the right to control their bodies. The right questions all of these and calls them “racist,” “socialist,” and “fascist.” We need to reclaim the ground of common sense.

Here are four ideas for action, largely based on Anne Braden’s approach.

[Anne Lewis is an independent filmmaker frequently associated with Appalshop and a Senior Lecturer at UT-Austin. Credits include: “Morristown: in the Air and Sun,” a working class response to globalization; “Fast Food Women” (POV and London Film Festival Judges’ Choice); “On Our Own Land” about a citizens’ effort to stop strip mining (duPont Award); and Associate Director, “Harlan County, U.S.A.” “Anne Braden: Southern Patriot” is co-directed with Mimi Pickering. Anne is a proud member of Local 6186 CWA-TSEU and CWA-NABET. Anne’s website is www.annelewis.org.]