Culture Wars : ‘Take Our Country Back’ 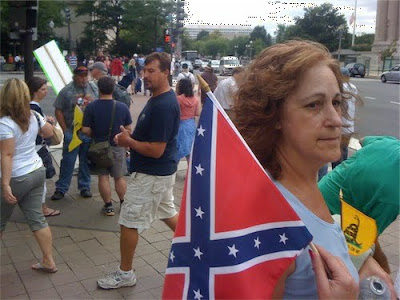 Many fear that they have lost the country that was bequeathed to them — and to them alone — like an old pocket watch from their grandfather.

At first glance it seems inexplicable: Confederate battle flags waving in Washington state and Washington, D.C., when the issue is health care.

Placards that read, “America is a Christian Nation,” appearing in marches when the stated concern is the federal deficit.

Where does the anger come from to call congressmen hateful names?

The answer resides inside the tea party anthem — oft-repeated since the protests on Capitol Hill last September — “Take Our Country Back.” Many fear that they have lost the country that was bequeathed to them — and to them alone — like an old pocket watch from their grandfather.

Theirs is a patriotism in which the common good devolves down to the individual privileges of property and wealth. It is a nationalism in which race is implicit, rather than explicit.

The crowds singing “Take It Back” might be all white, but when a black or brown face shows up it is welcomed as a sign of the “non-racial” character of their all-white cause.

From this medium of contradictory beliefs about “real Americans” and inglorious fears of “dispossession” has sprung a movement that is still developing and has not yet reached its final form.

Certainly, there are coldly dispassionate ideologues in this mix:

By themselves, these highly defined political strands are not strong enough to challenge the status quo. Intertwined with each other and with the chaotic mix of passions described above, however, the tea party movement has proven more powerful than expected.

It has transformed the political discourse and has systematically defied common-sense explanations.

While the tea parties have emerged during a period of economic distress, and unemployed job seekers are certainly in their midst, polling data tells us for the most part these people are not suffering financially themselves. According to a CNN survey in February, a full 66 percent of “tea party activists” said they made more than $50,000 a year.

Neither is this some form of populism, similar to the revolt by 19th century farmers. In this instance, the opposition to political and economic elites is predicated on the supposition that those at the “top” are using their power to serve those at the bottom, at the expense of those in the middle.

This is a form of Middle American nationalism more akin to that expressed by Gov. George Wallace’s 1968 presidential campaign than to the rarified blue-blood conservatism of William Buckley.

In the end, tea partiers are not engaged in a civil discussion with fellow Americans about public policy. Rather they are fighting a culture war against people they regard as enemies. The questions are whose America is the “real” America, and whether our society will remain open and democratic.

That is a decision all of us must make.

[Leonard Zeskind, author of Blood and Politics: The History of the White Nationalist Movement from the Margins to the Mainstream, is president of the Institute for Research and Education on Human Rights. Zeskind blogs at www.leonardzeskind.com/. This article was also published by the Kansas City Star.]

5 Responses to Culture Wars : ‘Take Our Country Back’