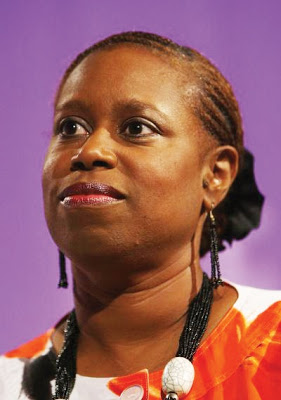 Former U.S. Rep. Cynthia McKinney is now imprisoned in an Israeli jail after the Israeli stopped a boat with humanitarian supplies bound for Gaza.
Letter from an Israeli jail

I am being held in this prison because I had a dream that Gaza’s children could color and paint, that Gaza’s wounded could be healed, and that Gaza’s bombed-out houses could be rebuilt.

This is Cynthia McKinney and I’m speaking from an Israeli prison cellblock in Ramle. [I am one of] the Free Gaza 21, human rights activists currently imprisoned for trying to take medical supplies to Gaza, building supplies — and even crayons for children; I had a suitcase full of crayons for children.

While we were on our way to Gaza the Israelis threatened to fire on our boat, but we did not turn around. The Israelis hijacked and arrested us because we wanted to give crayons to the children in Gaza. We have been detained, and we want the people of the world to see how we have been treated just because we wanted to deliver humanitarian assistance to the people of Gaza.

At the outbreak of Israel’s Operation Cast Lead [in December 2008], I boarded a Free Gaza boat with one day’s notice and tried, as the U.S. representative in a multinational delegation, to deliver three tons of medical supplies to an already besieged and ravaged Gaza.

The world saw Israel’s despicable violence thanks to Al-Jazeera Arabic and Press TV that broadcast in English. I saw those broadcasts live and around the clock, not from the USA but from Lebanon, where my first attempt to get into Gaza had ended because the Israeli military rammed the boat I was on in international water[s]… It’s a miracle that I’m even here to write about my second encounter with the Israeli military, again a humanitarian mission aborted by the Israeli military.

The Israeli authorities have tried to get us to confess that we committed a crime… I am now known as Israeli prisoner number 88794. How can I be in prison for collecting crayons [for] kids?

Zionism has surely run out of its last legitimacy if this is what it does to people who believe so deeply in human rights for all that they put their own lives on the line for someone else’s children. Israel is the fullest expression of Zionism, but if Israel fears for its security because Gaza’s children have crayons then not only has Israel lost its last shred of legitimacy, but Israel must be declared a failed state.

I am facing deportation from the state that brought me here at gunpoint after commandeering our boat. I was brought to Israel against my will. I am being held in this prison because I had a dream that Gaza’s children could color and paint, that Gaza’s wounded could be healed, and that Gaza’s bombed-out houses could be rebuilt. 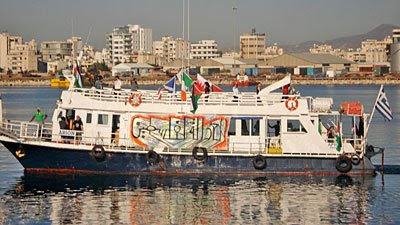 The aid ship Spirit of Humanity as it left for Gaza, before being seized by the Israelis.
But I’ve learned an interesting thing by being inside this prison. First of all, it’s incredibly black, populated mostly by Ethiopians who also had a dream… like my cellmates, one who is pregnant. They are all are in their 20s. They thought they were coming to the Holy Land. They had a dream that their lives would be better… The once proud, never-colonized Ethiopia [has been thrown into] the back pocket of the United States, and become a place of torture, rendition, and occupation. Ethiopians must free their country because superpower politics [have] become more important than human rights and self-determination.

My cellmates came to the Holy Land so they could be free from the exigencies of superpower politics. They committed no crime except to have a dream. They came to Israel because they thought that Israel held promise for them. Their journey to Israel through Sudan and Egypt was arduous. I can only imagine what it must have been like for them. And it wasn’t cheap. Many of them represent their family’s best collective efforts for self-fulfillment. They made their way to the United Nations High Commission for Refugees. They got their yellow paper of identification. They got their certificate for police protection. They are refugees from tragedy, and they made it to Israel, only after they arrived Israel told them, “There is no UN in Israel.”

The police here have license to pick them up and suck them into the black hole of a farce for a justice system. These beautiful, industrious and proud women represent the hopes of entire families. The idea of Israel tricked them and the rest of us. In a widely propagandized slick marketing campaign, Israel represented itself as a place of refuge and safety for the world’s first Jews and Christians. I too believed that marketing and failed to look deeper.

The truth is that Israel lied to the world. Israel lied to the families of these young women. Israel lied to the women themselves who are now trapped in Ramle’s detention facility. And what are we to do? One of my cellmates cried today. She has been here for six months. As an American, crying with them is not enough. The policy of the United States must be better, and while we watch President Obama give 12.8 trillion dollars to the financial elite of the United States it ought now be clear that hope, change, and “yes we can” were powerfully presented images of dignity and self-fulfillment, individually and nationally, that besieged people everywhere truly believed in…

It was a slick marketing campaign as slickly put to the world and to the voters of America as was Israel’s marketing to the world. It tricked all of us but, more tragically, these young women.

We must cast an informed vote about better candidates seeking to represent us. I have read and re-read Dr Martin Luther King, Jr’s letter from a Birmingham jail. Never in my wildest dreams would I have ever imagined that I too would one day have to [write one]. It is clear that taxpayers in Europe and the US have a lot to atone for, for what they’ve done to others around the world. 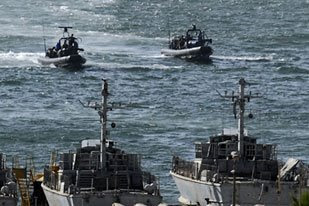 The Israeli navy is shown stopping “The Spirit of Humanity,” the activists’ boat, off the coast of the Gaza Strip on Tuesday. Photo from AFP.
What an irony! My son begins his law school program without me because I am in prison, in my own way trying to do my best, again, for other people’s children. Forgive me, my son. I guess I’m experiencing the harsh reality which is why people need dreams. [But] I’m lucky. I will leave this place. Has Israel become the place where dreams die?

Ask the people of Palestine. Ask the stream of black and Asian men whom I see being processed at Ramle. Ask the women on my cellblock. [Ask yourself:] What are you willing to do?

Let’s change the world together and reclaim what we all need as human beings: Dignity. I appeal to the United Nations to get these women of Ramle, who have done nothing wrong other than to believe in Israel as the guardian of the Holy Land, resettled in safe homes. I appeal to the United State’s Department of State to include the plight of detained UNHCR-certified refugees in the Israel country report in its annual human rights report. I appeal once again to President Obama to go to Gaza: send your special envoy, George Mitchell there, and to engage Hamas as the elected choice of the Palestinian people.

I dedicate this message to those who struggle to achieve a free Palestine, and to the women I’ve met at Ramle. This is Cynthia McKinney, July 2nd 2009, also known as Ramle prisoner number 88794.

[Cynthia McKinney is a former Democratic US congresswoman, Green Party presidential candidate, and an outspoken advocate for human rights and social justice. The first African-American woman to represent the state of Georgia, McKinney served six terms in the US House of Representatives, from 1993-2003, and from 2005-2007. McKinney’s remarks were transcribed here from a telephone call received and broadcasted by WBAIX.org.]

Thanks to Mike Klonsky / The Rag Blog

2 Responses to Cynthia McKinney : Letter From an Israeli Jail