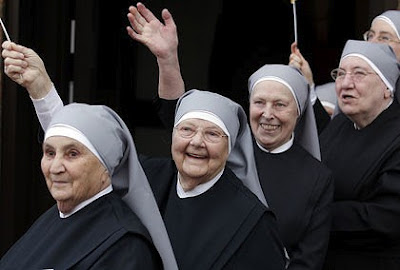 Image from the Brisbane Times.
Here come the Nuns!

They do not preach it from a pulpit, but live it with their example, in miserable hospitals, in shanty towns, schools, jungle dispensaries, and in places of conflict.

God knows how to do Divine stuff: the one who doesn’t know is the Pope. In a display of celestial irony, women, traditionally marginalized and turned into nobodies by the Roman Catholic Church, are shaking the foundations of that archaic, machista, and reactionary institution.

From Saint Paul, who ordered the wife’s submission to her husband, to the Councils and Synods that prohibit ordaining women to the priesthood, the Roman Catholic hierarchy has been a powerful club of old bachelors.

Nevertheless, women created the greatest lay schism of recent years when they decided that their bodies were their own and did not belong to the parish priest, and, without rejecting their fundamental religious beliefs, they disobeyed, en masse, the norms of the bedroom ordained by Rome. The pill, divorce, free sexual relations, and recently, abortion, have been flags of independence for Roman Catholic women.

A small volcano is now starting to boil inside the clerical body. It is a volcano that could bring profound internal transformations and retake the values of primitive Christianity. And do you know who is fomenting that significant revolution? The nuns. God certainly knows how to accomplish Divine works.

The incident that widened the gap between the nuns and the hierarchy is a recent communication where the Vatican criticizes a certain North American association, the Leadership Conference of Women Religious, for moving away from the teachings of the bishops, “who are the authentic teachers of faith and morals.” In the same document, the Vatican appoints an archbishop to bring the unruly nuns under control.

The arm of the Vatican for the doctrine and the faith affirms that this association of nuns –1,500 out of a total of 1,800 — disagrees with the papal condemnation of homosexuality and the priesthood of women. Deep down, Rome is upset because the nuns support Barack Obama’s program of public health that, among other benefits, offers assistance in some cases of abortion.

For that also there was a tiron de orejas [slap on the wrist] to another group of North American nuns who were chided because “they are too occupied with issues of poverty and social injustice while they are silent about abortion and same sex marriage.”

More than an accusation, this is an acknowledgement. Jesus of Nazareth never condemned gays or abortion; He did, however, castigate the rich (remember what He said about the camel and eye of the needle?), and He defended the poor and destitute.

That is what thousands of nuns are doing all over the world. They do not preach it from a pulpit, but live it with their example, in miserable hospitals, in shanty towns, schools, jungle dispensaries, and in places of conflict.

It seems like a strange lie that those who tried to cover up the shameful scandal of pedophile priests are now demanding that the nuns abandon their works of mercy and dedicate themselves to promoting sexual causes that are both stale and alien to the feelings of Christians. That is why tens of thousands of lay people signed a letter in support of the nuns.

All this is depressing. But it also offers a little hope for change. Restless nuns are not rare. They are seen from Saint Theresa of Avila up to our strong Leonor Esguerra, nun, teacher, and guerrilla. It just may be that the nuns, together with indignant priests, will retake the true meaning of the Church.

God knows how to do Divine stuff.

[Daniel Samper Pizano is an acclaimed Colombian-born journalist, novelist, and screenwriter who now lives in Madrid.]