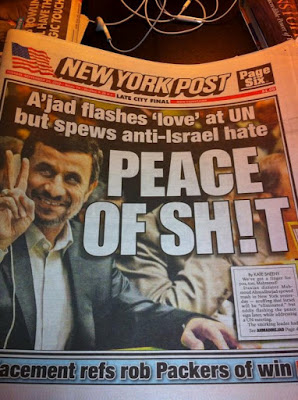 Diplomacy, Murdoch style. Image from Twitchy Media.
Is Iran trying to tell us
something we won’t hear?

NEW YORK CITY — Sometimes major media are the last to recognize shifts in policy positions. Iran is a case in point.

In the lead up to President Mahmoud Ahmadinejad’s annual speech to the General Assembly, the American TV stations were preparing their audiences for another provocative Israel-hating rant.
Brace yourself, we were told; it is his last appearance in office so he would go off and all out in denouncing Israel and the world’s Jews.

Secretary General Moon cautioned him publicly to restrain his rhetoric even as right wing media outlets like Rupert Murdoch’s New York Post, that has never seen a far right wing Zionist cause it hasn’t embraced, went into full deionization mode with a front cover featuring his picture and the words, “Peace of Sh!t.” (It was reminiscent of the Saddam baiting in U.S. media in the run-up to the Iraq War.)

The rhetoric of the well-orchestrated anti-Iranian crowds outside was even bloodier than the Iranians had ever been, with former Republican speaker of the House and GOP presidential Candidate Newt Gingrich calling for immediate U.S. airstrikes. Gingrich sounded like his main financial backer, right-wing casino mogul and supporter of Israeli settlers, Shedon Adelson, who poured millions into his failed campaign before shifting his resources to Mitt Romney.

But, surprise, surprise, the Iranians shifted tack, and offered a subdued and non-inflammatory, even analytical, speech indicting big power pressure and capitalism but with no quotable excesses. Its tone may have reflected the fact that Iran is now leading the Non-Aligned Movement.

What is going on? The latest Iran Review, a respected policy journal, carries an article calling for dialogue with The U.S., not more diatribes. The magazine describes itself this way:

Iran Review is the leading independent, non-governmental and non-partisan website — organization representing scientific and professional approaches towards Iran’s political, economic, social, religious, and cultural affairs, its foreign policy, and regional and international issues within the framework of analysis and articles.

After talking to several top diplomats and international security experts from different countries in a couple of meetings that I attended during the past two weeks, I am now more convinced than ever that the normalization of relations between Iran and the U.S. should be a top priority of the leaders of both countries if they wish to avert a military clash that could easily turn into a regional or international conflagration. These direct and comprehensive talks could also set a better understanding between them to work more effectively in bringing peace and stability in the crisis ridden region of the Middle East.

Focusing only on Iran’s nuclear program as premise for confrontation with this country has practically deprived the U.S. to seek Iran’s much prized assistance on some critical issues that both countries have shared interest such as the stability in the post-occupation Iraq and Afghanistan, peace and stability in the wider Middle East region following the Arab Spring’s upheavals, and preference for a “soft landing” of revolutionary fervors in the region and especially if it spreads to Saudi Arabia with all consequential effects including on the world oil markets.

Note, also, that the new Egyptian President Morsi suggested that Iran could play a valuable role in dampening tensions with Syria. When Kofi Annan, suggested something similar, the idea was rejected by the United States and he later stepped down as a mediator.

I was recently at a TV appearance by a negotiations expert on Saudia Arabian TV. He told me that he is involved in two back-channel negotiations on the issue. Iranian nuclear experts are also offering compromise proposals reported by IPS journalist Gareth Porter but not yet any major media outlets:

Iran has again offered to halt its enrichment of uranium to 20 percent, which the United States has identified as its highest priority in the nuclear talks, in return for easing sanctions against Iran, according to Iran’s permanent representative to the International Atomic Energy Agency (IAEA).

Ali Asghar Soltanieh, who has conducted Iran’s negotiations with the IAEA in Tehran and Vienna, revealed in an interview with IPS that Iran had made the offer at the meeting between EU Foreign Policy Chief Catherine Ashton and Iran’s leading nuclear negotiator Saeed Jalili in Istanbul Sept. 19.

And so, there are clearly initiatives underway to build bridges, but so far, media outlets, eager to fan the flames of confrontation and polarization, have ignored them. Is it ignorance or something worse?

1 Response to Danny Schechter : Is Iran Shifting its Message?