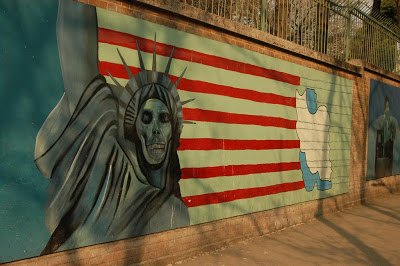 Outside wall of U.S. Embassy, Tehran. Photo from smoughadam / Flickr.
Memories that still hold us hostage:
A visit to the U.S. Embassy in Tehran

The latest massive Wikileaks revelations released Sunday show how the U.S. and its allies have been discussing military attacks and covert actions against Iran. If history is any judge, things don’t always work out the way Washington wants, as Danny Schechter recounts in this report about his recent visit to the former U.S. Embassy in Tehran, Iran, known locally then as a “spy nest.”

TEHRAN, Iran — The building was smaller than I remembered. The fading images in my mind were grainy: angry crowds, students marching, flags burning, chants of “Death to America,” and Americans diplomats in blindfolds, It became a soap opera: Ted Koppel started his rise in TV News with ABC’s nightly “America Held Hostage” series, the forerunner to Nightline.

Back then, I was in radio news, just transitioning into TV. I remember publicly debating about what we should do with a DJ friend who had turned from a Vietnam War peacenik into a bomb-Iran hawk.

In Iran, he takeover of the U.S. Embassy — what students called its “conquering” — was justified as a blow against imperialism, the seizure of a “spy nest.” It was, at the time, the most globally covered aspect of the Iranian Revolution, an audacious confrontation between people power and a foreign power.

The events that followed may have been considered revolutionary in Iran, but for progressive Americans they became the nail in President Jimmy Carter’s political coffin. He angered Iranians first when he toasted the Shah, calling him a beloved figure. He then tried and failed to negotiate through third parties and later sent in a military “rescue” operation that crashed and burned, leading to his own downfall.

The Iranians held him responsible for sheltering the ailing Shah; he in turn was being pressured by the likes of David Rockefeller and Henry Kissinger to protect the fleeing Monarch.

These events also helped bring on the turn to the right with the elevation of the actor we called “Ronnie Raygun.” The hostages were released in a tacit agreement after 444 days at the very hour of his inauguration.

We are still living with the consequences: wages declined, unions were broken, and military spending escalated. Reagan invaded Grenada and Beirut where the killings of hundreds of U.S. soldiers sparked what we now label a War on Terror and which Iranians see as a “Clash of Civilizations.”

The despotic Shah, our faithful servant for so many years, was driven from power by a popular revolt with the Ayatollah Ruhollah Khomeini soon becoming the man we loved to hate.

Now, 30-plus years later, I am standing in front of what was once our embassy, surrounded today by well-kept lawns as it was then.

It is as if the past is never past, with so many ghosts still around.

The tragedy is that polarization between our two countries remains symbolized by what is now a very politicized museum with photos of the activists who crawled through a basement window and tunnel to take it over. They were demanding the return of the Shah to stand trial. They were protesting U.S. interference in their internal affairs.

I didn’t remember that eight hostages — women and black employees — were released by Khomeini as a gesture. He urged the black men to return home and carry on the work of our most famous Muslim martyr, Malcolm X.

Malcolm was one of the Americans they admired.

There are rooms of creative if didactic art works, graffiti, and murals denouncing U.S. policy, including our news media which they see as a weapons system that has been deployed against them. (One slogan on the wall: “Information R.I.P.”) Perhaps this is why my film WMD: Weapons of Mass Deception was shown here and is popular.)

The angry art is not the building’s most popular attraction. On the second floor is the ex-Embassy’s own West Wing; behind a metal safe-like door is where the spying was done.

The offices are pretty much as they found them — a soundproof glass-encased safe room within a room, cryptographic equipment, communications gear that allowed them to tap Tehran’s telephones and a forgery bench where they created passports and spread disinformation. (I once saw a similar room in a former Stasi secret police station in East Germany that kept tabs on everyone.)

The students found a secret document with a floor plan of the Ayatollah’s residence and other artifacts of CIA espionage including guns and coding machines.

Today, all of this is done digitally and with much more sophistication. Just last week, the U.S. launched a massive new spy satellite to upgrade our global surveillance capabilities.

You don’t need embassies anymore to do this dirty work. We have since set up a well-funded Office of Global Reconnaissance but it doesn’t seem be to making us any more secure.

These days, a small group like Wikileaks has found ways to release hundreds of thousands of documents that officialdom wants to hide.

(After the Embassy seizure, The U.S. government downplayed spying by its diplomats, calling it “routine.” The latest Wikileaks expose reveals that diplomats are spying more than ever.)

As the students muscled their way into the Embassy back then, U.S. officials were busy destroying documents, burning them in the basement, throwing them into chemical vats that turned paper into powder, and feeding them into huge industrial-strength shredders. I saw the machines.

They managed to keep the activists at bay for three hours while destroying sensitive and potentially embarrassing data before surrendering.

What they didn’t count on was that scores of students would spend weeks patiently and systematically piecing the shreds together, literally ironing and weaving the fragments into readable prose. They reconstructed the destroyed documents and published them in scores of books that topped the best-seller list in Iran (if there was such a thing).

The late Bill Worthy, a legendary African American journalist, brought some of the books back to Boston in 1980 only to have them confiscated at the airport where he was threatened with prosecution.

Most Americans know little of Iran’s 2,500 year history, its proud culture, or the role played by the CIA in toppling the democratically elected Mosaddegh government in 1953. Mosaddegh wanted to nationalize the country’s oil instead of being forced to allow the West to exploit it. (The Ayatollah Khomeini referenced this event when he told the U.S.: “You have no right to complain, because you took our whole country hostage in 1953.”) There is no evidence that the Ayatollah organized the Embassy takeover.

They don’t know that the U.S. orchestrated Iraq’s invasion of Iran, causing a half million deaths, many from chemical weapons. I met some of the still-sick victims of those chemicals, including a disfigured Member of Parliament who was a war correspondent. Saddam’s chemical attacks on Iran’s military got almost no press attention compared to his gassing of Kurds.

Our ignorance still feeds dangerous calls for war like those made recently by the pin-headed Lindsey Graham, a Republican senator from the former Confederate State of South Carolina. He’s called for the sinking of the Iranian Navy. He seems to have forgotten his own state’s role in launching the American civil war after a Naval battle between the Monitor and the Merrimack in Charleston harbor.

The Confederates started it, but the Union finished it, finishing them finally at a great cost. Today, the South and its attitudes have risen again.

Graham also seems unaware that if we attack them, Iran will likely block the Strait of Hormuz freezing oil shipments worldwide. Not a good thing.

Today, some U.S. personalities want a theocratic state here like the one in Iran. Our own fundamentalists, many of them end-of-timers politicized into Christian Right movements, the antecedents of today’s Tea Party, fired up by vicious Islamaphobia.

Theocratic evangelists like Glenn Beck — posing as TV commentators — urge us to let God Rule, the message of some of Iran’s Mullahs. George Bush denounced Iran as part of the “Axis of Evil” while they do the same towards us. There is a poster in the former Embassy building denouncing U.S. evils.

I know my Iranian hosts expected me to be excited by visiting the Embassy as a symbol of an embarrassing setback to U.S. plans.

I reminded them that when the Taliban took Iranian diplomats hostage, and threatened to kill them, Iran moved troops to the border, and was about to invade Afghanistan before we did.

These symbols of our past conflicts have a way of blocking new initiatives and possible reconciliation. I am sure that the former Embassy building is on some target list for potential missile attacks on Tehran. Americans relish “payback” as much as do Iranians.

Avoiding an escalation of tension will not be easy as Jaswant Singh, a former Indian finance minister, foreign minister, and defense minister explains: “In both countries, deep and mutually paralyzing suspicion has poisoned relations for three decades. Negotiations in such an atmosphere are almost fated to failure.”

Can anything be done?

On the plane back, I watched the movie SALT where Angelina Jolie stops a fictionalized nuclear attack on Tehran at the last second in a gun battle staged in the bunker below the White House.

Hollywood pictures the story as a plot by Russian renegades who want to use nukes to outrage the whole Muslim world and trigger a more apocalyptic jihad against the U.S.

At the same time, we are doing all we can to block Iranian nuclear ambitions, even as I told an audience in Iran about my own objections to nuclear power plants in favor of green energies — not a popular position.

There are legitimate nonfiction fears of a new war against Iran, another no-win conflict that will cause more death and sap more treasure.

The neocons are busy at work lobbying for just such a war, eager to replicate their “heroic victory” over Iraq. They are playing the fear card with lots of covert lobbying from Israel that claims Iran represents an “existential” threat.

To me, the arrogant right-wing politicians and propagandists in Israel are a far more dangerous threat to any prospects for peace. Successive American administrations, like the current one, keep shoveling sheckels at them, appeasing their contempt for and occupation of Palestinians.

The world mocks dogmatic believers in the Koran while fanatical Torah worshippers have a free pass to practice hatred.

War is a profitable business, and as our economy continues its decline, we can anticipate more calls to “bomb, bomb, bomb Iran” so we can fight and spend our way to “recovery.”

Already our sanctions are hurting the Iranian people and their businesses without seriously impacting their government, whatever the fiery pubic claims of President Mahmoud Ahmadinejad.

We need to engage, but even the talks President Obama promised have yet to happen. Washington seems as frozen as Tehran in making a real overture.

What if Iran turned the former U.S. Embassy into an international peace and religious center for diplomatic discourse and mediation? That might be a gesture Washington could respond to. Why not recycle a relic of the past to enable a serious initiative for resolving conflict? The growing confrontation gives both countries an enemy to mobilize against while diverting attention from real problems.

Someone has to break the ice before we end up causing each other more pain!

My walk down a lane of bad memories convinced me that we need to work for a better future, not stay mired in the images and rhetorical combats of the past.

[News Dissector Danny Schechter just returned from Tehran where he was invited to be a judge in an international short film festival. Contact hem at Dissector@mediachannel.org.]