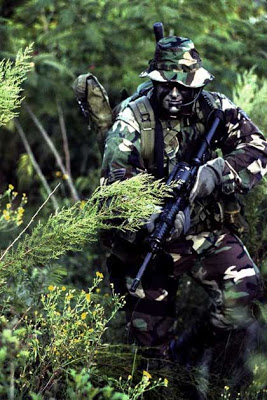 These Special Ops units often operate outside the chain of command and, as they become institutionally stronger, tend to dominate military decision making.

NEW YORK — William H. McRaven is an admiral in Obama’s Navy. He was a member of Seal Team 3, and oversaw the killing of Osama bin Laden.

He’s the consummate Special Ops warrior and wants more Special Ops forces, more drones and, most significantly, more “autonomy” (read, “power”) to position “his” troops in more places. He is now lobbying to expand his “freedom” by building a bigger personal arsenal of undercover operatives under his command.

The New York Times refers to his guys somewhat vaguely as “elite units” that “have traditionally operated in the dark corners of American foreign policy.”

That shines light on it, doesn’t it? What it says is: forget transparency and accountability. The hidden government is always hiding

These Special Ops units (like Special Forces, Rangers, Delta Force, and Navy SEALs) often operate outside the chain of command and, as they become institutionally stronger, tend to dominate military decision making.

McRaven’s ambition represents a takeover of the military by more and more clandestine killer units. They are deceptive, secretive, and are growing in influence. There are no cuts planned in this realm.

Under military governments, these are the units that support the secret police, often engaging in torture and murder with impunity.

They are given a sense of being our supermen, the real chosen people; ordinary rules don’t apply to them.

Democracy is not their “thing.”

At the same time, they operate in a climate of high stress, prone to mistakes, as the military newspaper Stars And Stripes points out:

The families of all troop operations live with fear, craving every crumb of information they can find about their deployed servicemembers, whether through military channels, Facebook, email or other outlets. Special operations families get less information.

For special operations forces, ranging from Army Special Forces and Rangers to Marine Force Recon to Air Force Pararescue to Navy SEALs, there are no public welcome home ceremonies, no crowds to sing their praises. Even if their missions, such as the raid in which bin Laden was killed, become public, the troops and their families remain anonymous.

Since most of those in special operations forces are recruited from within the services, the average member is older and has a larger family unit than those in other military occupations, according to Special Operations Command Europe commander Maj. Gen. Michael S. Repass.

Officials are attracted to these well-trained, real-life “action figures.” They like the idea of having “badasses” at their beck and call. Like New York’s Mayor Bloomberg, they see special units as their “private army,” but, unlike Mayor Mike, usually don’t say so.

JFK gave us the “Green Berets” who were glamorized in movies and with their own pop song, only to be later ground up in the Vietnam War like our other forces.

There is a growing fusion between intelligence ops and the military. To watch how this works, just follow Leon Panetta’s career from CIA to The Pentagon.

This command is an army within the army. It has doubled in size since 2001 with an official budget of $10.5 billion that is probably understated. They have at least 12,000 operatives in the field with 66,000 in the command itself and operate in more than 70 countries.

Can you name them? I didn’t think so.

The new Denzel Washington flick Safe House, shot in Cape Town, South Africa, takes us into the nether world of assassins and secret jails at the heart of the Special Ops mission. It’s not pretty.

McRaven is very media savvy with a degree, no less, in journalism. He was the go-to guy Obama used to put bin Laden on ice through an extrajudicial killing. They don’t call it assassination or liquidation, but that’s what it was.

According to The New York Times,

In February, Mr. Panetta called Vice Adm. William H. McRaven, commander of the Pentagon’s Joint Special Operations Command, to CIA headquarters in Langley, Virginia, to give him details about the compound and to begin planning a military strike.

Admiral McRaven, a veteran of the covert world who had written a book on American Special Operations, spent weeks working with the C.I.A. on the operation, and came up with three options: a helicopter assault using U.S. Navy SEALs, a strike with B-2 bombers that would obliterate the compound, or a joint raid with Pakistani intelligence operatives who would be told about the mission hours before the launch.

Wikipedia reports, “the day before the assault, “Mr. Obama took a break from rehearsing for the White House Correspondents Dinner that night to call Admiral McRaven, to wish him luck.” Thus blessed, he became a runner-up for Time’s Man of the year. He even played football in the NFL.

What a perfect resume to get the full General Petraeus treatment, our latest “hero” in the making

In the media world, including in many Hollywood films and the latest video games, Special Ops gets the “full monte” treatment, despite their well-cultivated mad dog, wild man image. Many of these “counterterrorists” become, in fact, terrorists. 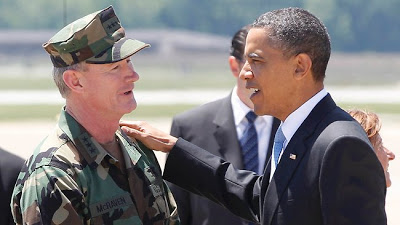 President Obama with Admiral William H. McRaven. Image from The Obama Diary.
This idealization of killer commandos is nothing new. Back in 1910, Theodore Roosevelt, known for his exploits as a “rough rider” in the Spanish American War, was ecstatic about their role:

It is not the critic who counts, not the man who points out how the strong man stumbled, or where the doer of deeds could have done better. The credit belongs to the man who is actually in the arena; whose face is marred by the dust and sweat and blood; who strives valiantly; who errs and comes short again and again; who knows the great enthusiasms, the great devotions and spends himself in a worthy course; who at the best, knows in the end the triumph of high achievement, and who, at worst, if he fails, at least fails while daring greatly; so that his place shall never be with those cold and timid souls who know neither victory nor defe

While The New York Times reports the Admiral wants a freer hand, Fox reports it is already happening with the Pentagon’s Afghan role likely to be expanded with more Special Ops warriors. (Even, as we are told that troops there are being “drawn down.”)

With the passage of the NDAA Defense Authorization act, how soon will it be before these tactics come home? We are already seeing the militarization of the police in the “homeland” or “battlefield” or whatever the hell we are living in.

The use of sophisticated sound weapons and infiltration against Occupy protesters is a sign that they are already being targeted as terrorists.

Our President, as a candidate, opposed bad wars. Now, he hasn’t seen many wars he doesn’t want to get involved in — as long as they can be fought in the shadows.