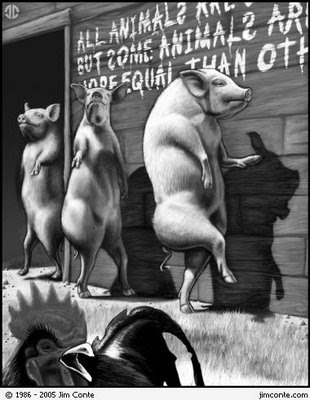 Parade of the banksters. Cartoon by Jim Conte.
Time to act:
A campaign to jail the financial fraudsters

“I’ll have the Chateau Mouton-Rothschild from 1982,” a Wall Street investment banker recently told his waiter at the latest and greatest shi-shi restaurant in Greenwich Village.

(As reported in The New York Times.)

And so it goes at The Lion, where no extravagance is too costly for today’s banksters and Lion Kings.

The men they call the “big swinging dicks” are back. In the words of The New York Times, Wall Street is getting its “groove back,” as the banksters anticipate their latest round of bonuses while gloating about how their strategic and undisclosed campaign donations assured that the overdue regulations they fear will be put on hold.

For them, buying the 2010 election was a small price to pay. Read economist James Galbraith’s column about how they did it.

Meanwhile the rest of us cling to our “jobless recovery” while the prospect of inflation engineered by the Federal Reserve Bank threatens what purchasing power we have.

Increasingly, economists in the know are saying that unless financial fraud is prosecuted, there can be no recovery, as Washington’s Blog reports:

As economists such as William Black and James Galbraith have repeatedly said, we cannot solve the economic crisis unless we throw the criminals who committed fraud in jail.

And Nobel prize winning economist George Akerlof has demonstrated that failure to punish white collar criminals — and instead bailing them out — creates incentives for more economic crimes and further destruction of the economy in the future.

“The legal system is supposed to be the codification of our norms and beliefs, things that we need to make our system work. If the legal system is seen as exploitative, then confidence in our whole system starts eroding. And that’s really the problem that’s going on.”

OUR RESPONSE: We don’t need more bailouts. We need a jailout.

Support the JAILOUT Economic Justice Campaign by signing the petition at New Dissector.

We need laws enforced, not winked at with financial settlements that allow those who enriched themselves at our expense, and destroyed the lives of so many, to get off scot-free, often with obscene bonuses and promotions.

Now, it is time for all of us to speak out and demand that something is done to stop foreclosures and create jobs.

We can start with a petition to the President, Attorney General, and political, labor, and youth leaders, not in the bag to Wall Street. We can call on the media to do more to cover this story instead of blaming the victims for the crime.

We are saying: ENOUGH IS ENOUGH

All of this has been done before. More than 1,500 bankers went to jail after the S&L crisis.

We demand a criminal investigation.

We demand to see the guilty parties indicted. Their illegal gains should be seized and distributed to their victims.

We demand the federal and state governments prosecute these crimes, using RICO laws when possible, not cut deals that allow these crooks to walk free.

We want our government to be on our side, to stand up for Main Street, not Wall Street.

If you committed these crimes, you would be doing time.

Go here to learn more about this effort and to sign the petition.

2 Responses to Danny Schechter : Time to Jail the Banksters