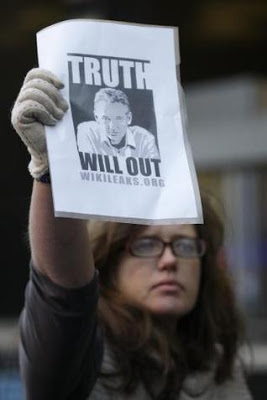 A supporter of Wikileaks founder Julian Assange holds up a placard outside the City of Westminster Magistrates Court in London. Photo from The Hindu / AP.

UPDATE: A British judge granted bail to WikiLeaks founder Julian Assange on Tuesday, saying he must abide by strict bail conditions as he fights extradition to Sweden in a sex-crimes investigation…

Supporters outside City of Westminster Magistrates’ Court erupted in cheers when they heard news of the judge’s ruling. — AP / NPR / December 14, 2010

Something is rotten:
The strange case of Interpol’s Red Alert
on Julian Assange

The other Interpol Red Alert sought by Swedish prosecutors this year was for Jan Christer Wallenkurtz, a 58-year-old Swedish national wanted on multiple charges of alleged sex crimes and sex crimes against children.

Far be it from me to minimize the issue of rape, but to borrow from the Bard, in the case of the “rape” case being alleged against WikiLeaks founder Julian Assange (technically, Swedish prosecutors say it’s not rape, it’s “sex by surprise”), currently being held in a British jail without bail pending an extradition request from Stockholm: “Something is rotten in Sweden.”

As I wrote earlier, the alleged sexual crimes that Assange is currently being sought for by a Swedish prosecutor are:

1. Allegedly failing to halt an act of consensual sexual intercourse when his sex partner and host, Anna Ardin, claims she somehow became aware that the condom he was using had “split” and,

2. Having consensual sex with a second woman a few days later without informing her that he had just been with Ardin, and then, a day later, allegedly refusing to return a phone call on his cell phone, when she tried to call him to ask him to take an STD test.

(Assange says he had turned off and was not using his phone for fear he was being traced through it, not that refusing to take a call from a woman one recently slept with should be considered criminal. Cold or even cruel, maybe, but not justification for a rape charge!)

In most countries, including the U.S. and UK, these would not pass the test to be considered a crime, much less qualify as a category of “rape,” but Swedish authorities, who in all of this year have only submitted one other request to Interpol for assistance in capturing a sex crimes suspect, asked the international police agency to issue a so-called Red Alert for Assange, who was subsquently asked by police in the UK, where he was staying, to turn himself in or face arrest.

(The other Interpol Red Alert sought by Swedish prosecutors this year was for Jan Christer Wallenkurtz, a 58-year-old Swedish national wanted on multiple charges of alleged sex crimes and sex crimes against children.)

You have to ask, given that Sweden has the highest per-capital number of reported rape cases in Europe, how it can be that only these two suspects — Wallenkurtz and Assange — are brought to Interpol.

You also have to wonder how it is that Assange — charged only with consensual sex “offenses” — is denied bail by a British court magistrate, despite having several people at his arraignment hearing, including a well-known British filmmaker, ready to post whatever bail might be required to assure his return to court for an extradition hearing, while even people charged with aggressive rape are apparently routinely released on bail in both the UK and Sweden.

Here’s an interesting letter that ran in The Guardian in England, authored by Katrin Axelsson, of the British organization Women Against Rape:

Many women in both Sweden and Britain will wonder at the unusual zeal with which Julian Assange is being pursued for rape allegations. Women in Sweden don’t fare better than we do in Britain when it comes to rape. Though Sweden has the highest per capita number of reported rapes in Europe and these have quadrupled in the last 20 years, conviction rates have decreased.

On 23 April 2010 Carina Hägg and Nalin Pekgul (respectively MP and chairwoman of Social Democratic Women in Sweden) wrote in the Göteborgs-Posten that “up to 90% of all reported rapes never get to court. In 2006 six people were convicted of rape though almost 4,000 people were reported.” They endorsed Amnesty International’s call for an independent inquiry to examine the rape cases that had been closed and the quality of the original investigations.

Assange, who it seems has no criminal convictions, was refused bail in England despite sureties of more than £120,000. Yet bail following rape allegations is routine. For two years we have been supporting a woman who suffered rape and domestic violence from a man previously convicted after attempting to murder an ex-partner and her children — he was granted bail while police investigated.

There is a long tradition of the use of rape and sexual assault for political agendas that have nothing to do with women’s safety. In the south of the U.S., the lynching of black men was often justified on grounds that they had raped or even looked at a white woman. Women don’t take kindly to our demand for safety being misused, while rape continues to be neglected at best or protected at worst.

The long arm of the U.S. in this case is hard to miss here.

Especially in view of one of the latest WikiLeaks State Department cables to be disclosed in The New York Times, which in an article on Thursday laid out how the U.S. had strong-armed even the powerful German government into blocking German prosecutors from indicting and requesting the extradition to Germany of 13 CIA agents involved in the illegal kidnapping and renditioning to Bagram prison in Afghanistan of Khaled el-Masri, a German citizen wrongly thought by the CIA to be a terrorist.

El-Masri was kidnapped by these agents in 2003, stripped, bound, placed in an adult diaper with a plug in his rectum, and flown by the CIA to Bagram, where he was repeatedly tortured, sodomized, injected with mind-altering drugs, and held for months, before being simply dropped off by the CIA on an Albanian roadside, after it was determined by the U.S. that a “mistake” had been made.

The U.S. did not want its rendition program and its policy of officially-sanctioned torture disclosed and so it pressed German authorities to drop all prosecution of the agency kidnappers, threatening “the implications for relations with the U.S.” (El-Masri has been barred from suing the U.S. government for damages.)

It strains credulity to believe that the same U.S. government that put such pressure on Germany, a NATO ally, is not behind Swedish prosecutors’ sudden intense interest in this preposterous case of consensual sex and a broken condom — particularly as the initial prosecutor in the case dropped it after learning that the two women, far from being upset following their nights with Assange, had in one case thrown a party for him following the alleged incident, and in the other, left him in her bed while she went out to buy him breakfast.

(Both women reportedly sent twitters to friends bragging about their conquests, messages they later tried to have expunged from the Twitter system).

It also strains credulity to believe that the denial of bail to this particular suspect by a British court — particularly given that he is not charged with any violent act, and has no criminal record — is not the result of behind-the-scenes U.S. pressure.

Indeed, it appears that the U.S. is busy trumping up more serious charges against Assange, with his lawyers saying they are anticipating that the U.S. Justice Department (already reportedly in discussions with Swedish authorities about getting their hands on Assange), is planning soon to charge him under the 1917 Espionage statute, the same law that the Nixon Justice Department tried to use unsuccessfully against Daniel Ellsberg in the Pentagon Papers case. That could explain why efforts are being made to try to keep Assange held in a cell.

It could also explain why Assange is challenging the Swedish extradition request.

Opposition to the Afghan and Irag Wars is intense in the UK and is supported by the overwhelming majority of British citizens, which makes Assange something of a hero in Britain for his WikiLeaks exposes of the ongoing crimes by U.S. and UK forces in those conflicts. British government acquiescence to an extradition order from the U.S. on espionage charges would likely lead to massive opposition by British citizens.

Sweden, on the other hand, which is not a member of NATO, but which has some 500 troops participating in the “NATO” war in Afghanistan, does not face the same kind of popular opposition to its role, and Assange may fear that Sweden, a very small country, could be pressured much more easily to hand Assange over to U.S. authorities, with little resulting fuss from the Swedish public.

Back in the U.S., there has been no move by news organizations to come to Assange’s defense. In fact, the corporate media reaction to this whole issue has been the opposite. For the most part, the Swedish charges, and his arrest in Britain on the basis of the Interpol Red Alert, are reported as being about “rape,” without any explanation of the actual “violations,” which would not even rise to the level of a crime in the U.S.

Meanwhile, most editorial pages are condemning the violation of diplomatic secrecy, not the government’s efforts to shut down a source of important news about government ineptness, malfeasance, and deceit.

Yet if it turns out, as I’m confident it will, that the U.S. government has been the driving force behind both the arrest and imprisonment of Assange, and his extradition to Sweden, and if it turns out, as appears increasingly likely, that the U.S. government has also been behind simultaneous decisions by Visa, MasterCard, Paypal, and several Swiss banks to refuse to handle donations to WikiLeaks, as well as by Amazon, which withdrew Wikileak’s access to its cloud data storage system, and a DNS registry which de-registered WikiLeak’s URL, publishers and broadcasters, and journalists themselves, should be up in arms defending him.

As I wrote earlier, this kind of attack on a news source for purely political reasons is a threat to the First Amendment as profound as the Nixonian attack on Daniel Ellsberg, and the attempt to block The New York Times from publishing his purloined documents about the origins of the Vietnam War.

Andreas Fink, CEO of DataCell ehf, the Swiss company that has been accepting donations on behalf of Wikileaks via Visa, had this to say about the Dec. 8 decision by Visa to cease processing Wikileaks donations:

Visa customers are contacting us in masses to confirm that they really donate and they are not happy about Visa rejecting them. It is obvious that Visa is under political pressure to close us down. We strongly believe a world class company such as Visa should not get involved by politics and just simply do their business where they are good at. Transferring money.

They have no problem transferring money for other businesses such as gambling sites, pornography services and the like so why a donation to a Website which is holding up for human rights should be morally any worse than that is outside of my understanding.

Contributions can still be made to Wikileaks and to Assange’s defense by wire transfer and by check and ordinary mail. To find out how to contribute, go here.

By the way, if there is anyone out there working for Visa, MasterCard, Paypal, or any banking organization, or in a government office, who can provide me with evidence that the U.S. has been behind the decision of any of those organizations to freeze out WikiLeaks and destroy it financially, I will guarantee your anonymity at all costs. Please contact me or send me documentation.

[Dave Lindorff is a regular columnist for Counterpunch and has also written for such diverse and seemingly mutually exclusive publications as BusinessWeek, The Nation, Extra!, Treasury & Risk, and Rolling Stone. This article first appeared in This Can’t Be Happening and was distributed by Truthout.]