Dave Zirin :
Richard Sherman’s refusal to be a brand

If you’re going to root against the Seahawks, please do it for the right reasons. Not so Richard Sherman gets some kind of lip-buttoning comeuppance. 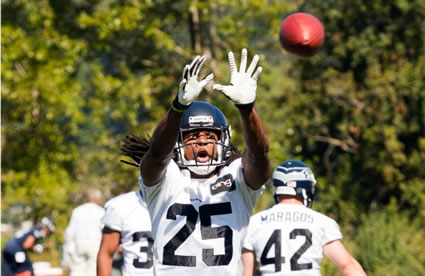 I was done writing about Super Bowl bound Seahawks cornerback Richard Sherman. I was done writing about the polarizing, perspicacious, Pro Bowler who with one iconic post-game interview morphed into our latest national Rorschach test about racism and sports. I was done partly because I had already written about him and partly because others have said it better. (Find great articles about Sherman and race here, here, and here.) I also didn’t want to write again about the man who made the journey from Compton to Stanford to NFL glory because we seem to be entering a place where his five-star post-game rant has crossed a line from rebellion to commodification. His marketing agent, Jamie Fritz, has been making the media rounds, telling the advertising trades that since Sherman said “CRABTREE” at volume 10, his phone has been ringing off the hook. “We haven’t seen a guy like this in a while,” Fritz gushed toAd Age. “Richard’s a guy who’s going to speak his mind. And that makes people very curious. We have data that Richard is single-handedly growing the Seattle Seahawks fan base in Middle America — where [Seahawks] fans would not exist.”

It just did not seem interesting to write about another athlete Madison Avenue was attempting to turn into a rebel with no cause.

It just did not seem interesting to write about another athlete Madison Avenue was attempting to turn into a rebel with no cause. But then, Richard Sherman took the microphone again this week and said something that needed to be said, something that won’t help him sell Big Macs to pre-schoolers. Facing the press on Wednesday, Sherman spoke about the avalanche of racist garbage he has faced since Sunday, trash that includes not only the social media barrage of racial epithets, but also being called a “thug” repeatedly in the mainstream media. Sherman said,

The only reason it bothers me is because it seems like it’s the accepted way of calling somebody the N-word nowadays. It’s like everyone else said the N-word and they said “Thug” and they’re like, “Ah, that’s fine.” That’s where it kind of takes me aback and it’s kind of disappointing.

He then brought up the decades-long double standard of how fighting in the almost entirely white NHL is viewed with a yawn but so much as raised voices from black athletes are greeted as a national calamity. Referencing a recent brawl between the Vancouver Canucks and Calgary Flames, Sherman said,

What’s the definition of a thug really? Maybe I’m talking loudly and doing something I’m not supposed to. But I’m not… there was a hockey game where they didn’t even play hockey. They just threw the puck aside and started fighting. I saw that and said, “Oh, man. I’m the thug? What’s going on here?”

Using the platform to tell harsh truths is not a recipe for being a Madison Avenue “brand.”

Using the platform to tell harsh truths is not a recipe for being a Madison Avenue “brand.” It is a recipe for actually doing something that moves society forward. James Baldwin once said that America was a country devoted to the death of the paradox. We want our jocks to be jocks, our poets to be poets, our ditch diggers to be ditch diggers, and our black athletes from Compton to not have the ability to call out the dominant culture on its own hypocritical bullshit. Richard Sherman is that paradox. But unlike the athletic paradoxes of the past, he is also acutely aware of the ways in which 21st-century media are attempting to put him in that box and kill his paradox. Richard Sherman has the ability to use words as weapons and spit arguments as easily as he spits insults. That makes him interesting. That makes him provocative. That makes him dangerous. And Beats by Dre aside, that makes him difficult as hell to brand. For many people watching the Super Bowl, the game will come down to whether you root for Peyton Manning, the Broncos quarterback, or Richard Sherman. For many people that will mean “Peyton good” and “Sherman bad.” For many people, like John McCain, that means rooting for Peyton to shut up the “loudmouth.” If you’re going to root against the Seahawks and Richard Sherman by all means do so. But please root against them for the right reasons, not so Richard Sherman gets some kind of lip-buttoning comeuppance. Whether you like the Broncos or Seahawks, you should hope for the greater good that Richard Sherman never shuts up. This article was first published at The Nation blog and was cross-posted to The Rag Blog by the author. [Dave Zirin is sports editor at The Nation and author of the forthcoming book, Brazil’s Dance with the Devil (Haymarket). Contact him at edgeofsports@gmail.com. Read more articles by Dave Zirin on The Rag Blog.]