David Bacon : Who’s to Blame for the Bangladesh Fire? 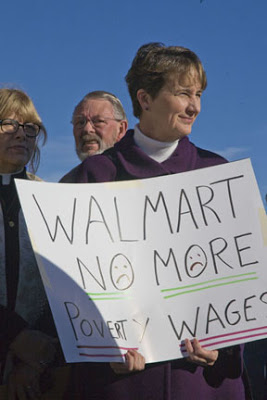 The Bangladesh fire that killed 112 workers tells us a lot about the conditions under which the garments consumers bought this Black Friday were made.

The day after Black Friday demonstrations of workers and supporters in front of hundreds of Walmart stores across the U.S., a fire killed 112 workers making clothes for Walmart at the Tazreen Fashions factory in Bangladesh. This was the most recent of several such factory fires, leading to the deaths of another 500 young women.

These fires are industrial homicides. They can be avoided. The fact that they’re not is a consequence of a production system that places the profits of multinational clothing manufacturers and their contractors above the lives of people. The same profit-at-any-cost philosophy is leading to growing protest among workers who sell those garments in U.S. stores over their own wages and conditions, especially at Walmart.

The Bangladesh fire tells us a lot about the conditions under which the garments consumers bought this Black Friday were made. Reports from the scene say there were no fire escapes. Several young women jumped from the windows to get away from the flames, as their sisters did a century ago in New York City, in the Triangle Shirtwaist fire. Most Tazreen workers were trapped inside and burned to death.

Walmart has a grading system for its contractors, and had put the Tazreen factory on “orange” status (green for good, yellow for not so good, orange for a warning, and red for a contractor whose orders are cut off). Yet the company’s inspectors must have seen that there were no fire escapes, and kept giving Tazreen orders.

The reason is clear. Wages are 21 cents an hour. Contractors like Tazreen compete against each other to get the orders. In a garment factory, the main way they cut costs is by cutting wages and expenses like safety.

Workers have been trying to win the right to organize militant unions to raise those wages and improve working conditions. If workers had been successful, they would have had the power to force the company to build fire escapes and make the factory safe.

But police in Bangladesh have been putting down demonstrations by workers in this region for months. One worker activist, Aminul Islam, was tortured and killed this year. The government uses low wages to attract manufacturers like Walmart. It does not enforce safety regulations, as the fires clearly show. Walmart then uses the labor of the women to boost its profits, and has the same attitude towards their efforts to organize unions that it does towards the efforts of its employees in the U.S. Total opposition.

This is not just Bangladesh’s problem, however. The system for garment production worldwide has nations competing in the same way — Bangladesh vs. China, for instance. Factory fires are the logical result because safety, unions, and higher wages are costs that will make a country uncompetitive. It’s also a U.S. problem. According to the Economic Policy Institute, Wal-Mart’s trade deficit with China alone cost 200,000 U.S. jobs between 2001 and 2006. Garment manufacturing in the U.S. has practically disappeared.

Manufacturers claim that if wages and safety costs rise, so will the prices of garments in U.S. stores. Yet if wages of 21 cents an hour were doubled, it would add only a few pennies to the cost of even a cheap teeshirt.

Walmart customers on Black Friday spoke out in favor of higher wages and more rights for Walmart’s store workers. They would support the same for factory workers in Bangladesh. The obstacle is the contractor system, competition between contractors and countries, and a policy of suppressing unions. The system of self-policing hailed by Walmart and large manufacturers does not change this situation. It is a fig leaf.

Whether at a sewing machine in Bangladesh or at a cash register in California, workers have the right to a safe job, a decent standard of living, and to organize. We need a system for producing and selling clothing that reinforces those rights, not one that works against them.

David Bacon wrote this article for the Progressive Media Project and crossposted it to The Rag Blog.

[David Bacon, a former union organizer, is a California-based writer and photographer. He is the author of Illegal People: How Globalization Creates Migration and Criminalizes Immigrants, published by Beacon Press. His photographs and stories can be found at dbacon.igc.org. Read more of David Bacon’s articles on The Rag Blog.]