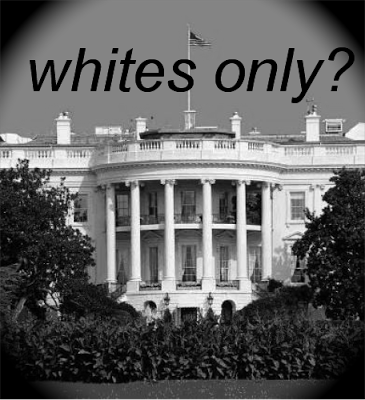 Observations on this morning’s news.

“Fox News” paired a white male Demo spokesperson with a maybe Latina female Repug counterpart. Question: Is race the principal issue in the presidential campaign? As evidence, polls show a significant percentage of white voters will not, under any circumstances, vote for a black man.

These polls also conclude that this overtly racist portion of the white electorate is only the tip of the iceberg. Otherwise, Obama would be way ahead, more like the impending Demo landslide in the Congress. Weird result: both pundits agreed that racism is a very major factor. To my surprise, the Repug accepted without blinking that they were the benefactors of the racism vote. Sort of, “yeah, we’re ok with that.”

A few minutes later, McCain is shown speaking to an Irish-American assemblage in Scranton, PA, on all cable channels. Using the established codes, he openly panders to racism. The audience behind him is entirely white. While discussing immigration, he praises the contributions of past immigrant groups – “the Irish, the Italians, the Poles . . . and yes, the Hispanic, too.(voice dropping)” Pointedly, no mention was made concerning the contributions of the descendants of past involuntary immigrants.

McCain has known all along he couldn’t win on issues. He wants competitive branding, a Coke vs. Pepsi election. He has also been totally open to scurrilous negative campaigning and perpetual lying. But the core of his campaign now is mobilization of the racist vote by conspicuously dropping all pretense of diversity. The nomination of a small (white) town evangelical for Vice President supports this analysis. Activating the most racist component of American society has been Sarah Palin’s primary role. And it is now the Repugs’ primary strategy to win.