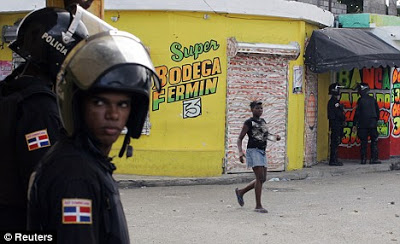 Despite national and international outcry, the Dominican National Police is continuing its tradition of violent repression of dissidents at a time when protests are becoming more common across the country. Some recent incidents in El Cibao, the agricultural and mining region in the north, have resulted in the arrests of many demonstrators, a number of injuries by tear gas and gunshot, and one death.

A delegation from Amnesty International had met with the Distrito Nacional prosecuting attorney as recently as early October seeking information on the large number of deaths of citizens at the hands of the National Police throughout the country and in the capital in particular. At least 226 unlawful killings by the police occurred in the country between January and August of 2009. Thirty percent of the homicides in the Distrito Nacional during the same period were reportedly committed by the police.

In the most dramatic recent incident in El Cibao, a university student taking part in protests on October 12 against government neglect of poor neighborhoods in the area of Santiago de los Caballeros, the country’s second largest city, was shot to death when police fired into the crowd of demonstrators, and at least four others were injured. The demonstrators were demanding that roads be paved and reliable water and electrical power be provided.

Residents of the communities point out that major roads are impassable and that for many years promises of repairs made during election campaigns are quickly forgotten after the elections. Electrical power is available only sporadically in many areas.

A similar incident occurred on July 16 when police shot and killed 13-year-old Miguel Ángel Encarnación during a demonstration by residents of the Capotillo neighborhood of Santo Domingo over the same problems of unpaved roads, intermittent power and water supplies and poor infrastructure in general.

The government has in the meantime promoted the construction of hotels and other businesses catering to tourists and has invested in infrastructure in areas favored by them. 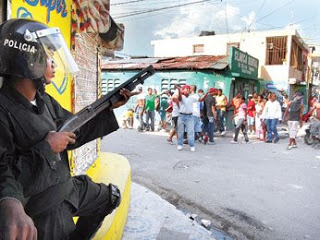 In nearby Cotui, the national police on October 13 used tear gas and birdshot against miners demonstrating for union recognition at the Pueblo Viejo gold mine, of which Barrick Gold of Canada is the majority owner. At least six miners were injured..

Barrick has consistently resisted the miners’ efforts to organize. Labor Minister Max Puig warned the company in August that the government would enforce provisions of the labor code protecting the miners’ rights, although labor federation president Rafael Abreu had presented evidence in June to the International Labor Organization in Geneva documenting Puig’s interference in workers’ rights to form unions at Barrick Gold and other companies.

A renegotiation of the contract between Barrick and the government resulting from rising gold prices had drastically reduced the government’s share of profits from the mine, possibly providing motivation for government support of the workers.

In 2006, Barrick had acquired a 60 percent interest in the mine, one of the oldest European gold mining operation in the Americas, sparking continuing protests by the some 2,000 Dominican and Peruvian miners employed there and by environmentalists and farmers of the area, which is in the heart of the country’s most fertile agricultural region. 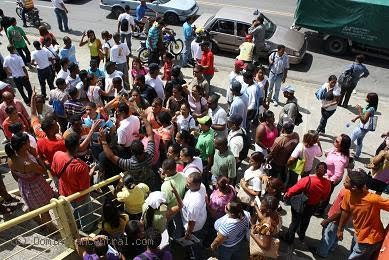 The death of the student in Santiago had occurred during demonstrations in a number of communities in the area, all of which, organizers say, were peaceful before the police intervened. “We weren’t even burning tires,” according to Víctor Bretón of the Frente Amplio de Lucha Popular, FALPO, the Broad Front for Popular Struggle, “because the protest was peaceful, when a police contingent arrived and one of them, without saying a word, fired indiscriminately against us, killing our comrade and injuring four others.” The student who was killed, Alfredo Gómez Núñez, was also a member of FALPO.

The National Police were back the next day at the funeral for the slain demonstrator. The mourners reacted angrily to the police presence by blocking roads, burning tires, and shouting slogans against the police and the police responded by again firing into the crowd. Four protesters, including two minors, and one police officer, were injured.

Police authorities claimed the officer was shot by the demonstrators, a claim Bretón denied, saying “unarmed and grieving” people would not open fire on a heavily armed police force.

Police then occupied the streets in communities throughout the area and protests continued, with the burning of tires and the blocking of a major highway, Carretera Duarte. Residents of Los Tejados, who had been without power for a week, blocked another highway then evaded arrest by fleeing before police arrived.

On the same day, high school students in San Francisco de Macorís, another city in El Cibao, protested the killing, with university students following suit with their own vigorous protest, forcing the cancellation of classes at the Centro Universitario Regional del Nordeste in San Francisco for the rest of the day. The campus of the Universidad Nacional Autónoma de Santo Domingo, in the capital, was also closed down for the day because of demonstrations there. University rector Franklin García Fermín attributed the protests to violent, hooded vandals.

Police authorities in Santiago meanwhile announced the formation of a commission to investigate police behavior during the events. “We object to that commission,” said FALPO activist Raúl Monegro, “due to the fact that you cannot be an aggressor and at the same time investigate yourself.”

Amnesty International has also investigated the case of Juan Almonte Herrera, of the NGO Dominican Committee on Human Rights, who was abducted on his way to work in Santo Domingo on September 28, 2009, by men witnesses have identified as officers of the National Police. One of two charred bodies found in a burned car the next month was identified by his sister as Almonte, although police denied the identification. Family members and lawyers pursuing the case report being under surveillance and receiving death threats.

The National Police traces its origins to the Dominican Constabulary Guard, which was created by the U.S. marines during the military occupation of 1916 to 1924. It was renamed the National Police the year the marines left. One of its early members was Rafael Leonidas Trujillo, who joined the force in 1919 as a second lieutenant and rose through the ranks to become commander of the force by 1930. He became president that year and ruled the country, either directly or through puppets like Joaquín Balaguer, until he was assassinated in 1961. He was one of the most brutal dictators in the history of Latin America.

[San Antonio native David Holmes Morris is an army veteran, a language major, a retired printer, a sometime journalist, and a gay liberationist. This article was also posted to Upside Down World.]