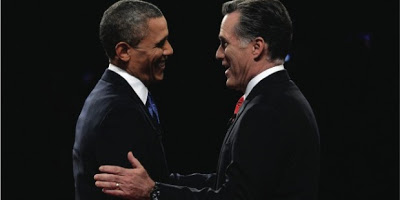 What is certain is that neither candidate is willing to make a real break with the military/industrial complex which dominates this country.

This is Sunday night, and my only excuse, weak though it may be, for this late intervention in the 2012 election discussion is that I was in California for three weeks, then found myself engulfed by Sandy (that is, with no power, phones, internet, etc.).

First, on the essential issue, no I won’t vote for Obama. I’m in a “safe state” (New York) where a vote for Obama is truly wasted. Since the Socialist Party is not on the ballot here, I’ll vote for the Green candidate. I think there is a difference in who wins — not much, but some.

(Sometimes a great deal — I doubt Al Gore would have invaded Iraq — but as a twist on this, I doubt that, if Stevenson had been elected in 1952, he could have ended the Korean War — and remember that it was Eisenhower who vetoed Nixon’s eagerness to use nuclear weapons in Indochina and it was Johnson who plunged us so deeply into that war.)

By the end of the campaign we are swept up as if the fate of the world depended on which candidate wins. The old radical position is still true — there isn’t that much difference. I remember the Communist Party (and much of the Left) being convinced that if Eisenhower won in 1952 we would have a military dictatorship — and if memory serves (which it often doesn’t) it was I.F. Stone who supported Eisenhower in that year.

I like Obama. And I refuse to hate Romney. One doesn’t know enough about him to even know whether or not to like him. He is all things to all people, depending on the situation. I worry most about the neocons in his foreign policy camp, but he might ignore them.

I can list several other areas which both candidates have dodged, areas that are truly urgent. Let’s take the developing prison industrial complex — we call ourselves a free nation but we have more men and women in prison than any other nation on the planet. Let’s look at the drug wars, which have failed dismally, yet neither candidate was prepared to discuss legalizing marijuana and treating heroin addiction as a medical problem.

On the issue of military spending, which is more complex than the peace movement seems to realize, Romney is surely out of his mind to urge an increase in such spending. But Obama did not propose closing down the military bases the U.S. has in Europe, Japan, South Korea, Okinawa, etc. etc.

And have we realized that if we simply call for a 50% cut in military spending (or even a 5% cut) we will immediately increase unemployment — unless there is a government program to provide alternative employment? How ironic that the conservatives, so opposed to any and all government spending for any useful purpose, are not only happy with military spending but want to increase it!

There is one solid reason for voting for Obama in you are in a swing state — the Supreme Court nominations.

If you live in a state that is considered “safe” for either candidate, then voting for that candidate is an utterly wasted vote. Any conservative in Texas who votes for Romney when they could vote for the Libertarian does not increase the chance of Romney to win, but only endorses the sad failure of the GOP to adapt to modern times.

And any of my friends who vote for Obama in California, or Washington, or Oregon, Illinois, New York, etc., are losing a chance to vote for candidates — socialist or green — who would, without any risk of losing the election of Obama, show that there is a body of citizens who want serious change.

What is happening that I find most disturbing is not Romney, but the gradual growth of the Tea Party apparatus at local levels around the nation. They made a concerted effort to limit voting by minority groups. And, when one looks at some of the Tea Party members of Congress, led by Michele Bachman, along with Todd Aiken, Joe Walsh, Allen West, etc., we are looking, not at conservatives, but at nuts.

While, taken as a whole, the Tea Party is racist, that is too simple, since one of their heroes is Allen West, an African American from Florida, who insists there are nearly a hundred members of the Communist Party in Congress.

Liberals should remember that it was not so long ago that the nuts who didn’t believe in evolution, or racial equality, were in the Democratic Party — until the Civil Rights Revolution in the 60’s and the shift in the Democratic Party drove these folks into the GOP. But what is disturbing is how comfortable Romney seems to be with these people, with the support of someone such as Donald Trump. It may sound elitist of me, but I’m bothered as much by the sheer vulgarity of Trump as I am by his politics.

What I know, at 83, is that it was foolish of me, in 1964, to support LBJ when it was clear he would win. I had thought my vote — and the rallying of liberals and radicals in his support — would be a referendum in favor of civll rights and peace. Sadly he plunged a half million men and women into Vietnam. How much better if we had given our support to any candidates on the left in the election.

I know my position is alien to the three socialist groups of which I’m a member. The Socialist Party will be upset that I support voting for the Greens in a swing state where our party is not on the ballot. Democratic Socialists of America and the Committees of Correspondence for Democracy and Socialism will (not all of them — I am not the only member in dissent on this issue) be distressed that I do not see the historic imperative of full support for Obama.

What I think those of us on the Left need to do is to realize, first, how small our forces are. Obama will win or lose even if all the members of the groups I’ve named above simply sat this race out. Other, much more powerful forces will determine the outcome. The Black Churches, the Hispanic community, the trade unions, the independent liberals who do not belong to any radical group. (And, of course, on Romney’s side are other powerful forces, some quite dangerous and essentially anti-democratic.)

The second thing we must do is realize that major changes in our culture never originate within the major parties. The Civil Rights movement, the women’s movement, the Vietnam Peace movement, the Gay and Lesbian movement, the environmental movement — all of these began outside either major party, and only by their growth did they force their issues on the political agenda.

So our work is local. It is slow. It is educational as well as political. And our goal is not to achieve the victory of liberalism, but of a radical change in the economic and social culture of our times. Yes, for me that means democratic socialism — clearly a discussion for another time, even though the failures of capitalism are by now clear to many.

One final thought, which is on the late entrance of the abortion issue into the campaign. In some ways this is a secondary issue, as I do not think even a Romney victory would result in banning abortion. But there is something about the Tea Party support of “right to life” (and remember that Aiken’s positions on this are very much the same as those of Romney’s running mate) which is deeply dangerous.

I do understand the profound moral issue this poses for Mormons, Catholics, Orthodox Jews, and evangelicals. I do not mock their concern. I do not take abortion lightly (and by and large neither do women). I will leave to one side the obvious — that men, from the leaders of the Mormon Church to the Pope in Rome, do not face this problem in any immediate way.

What is important is that to make one’s moral position a matter of law — to decide that not only will good Catholics not have abortions, but that laws should be passed making it impossible for secular women to make that decision– is to pass from being a secular and democratic society to one which takes on the tinge of the Taliban. That is why we keep Church and State separate — something the current Republican Party no longer accepts.

Part Two will come later. Meanwhile, I do hope you vote — that right was won at great cost. Just make your vote as meaningful as possible.

[David McReynolds is a former chair of War Resisters International, and was the Socialist Party candidate for President in 1980 and 2000. He is retired and lives with two cats on the Lower East Side of Manhattan, and is happy power has been restored.. He posts at Edge Left and can be reached at davidmcreynolds7@gmail.com. Read more articles by David McReynolds on The Rag Blog.]