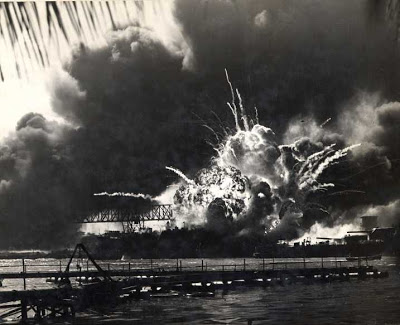 I know that on Monday, when I went to Junior High School, I felt special pride as I saluted the flag. Any questions I might have about flags and patriotism would be many years ahead.

December 7th now comes as an almost forgotten date. It was only in typing up my notes for the week that I remembered the date and how special it was. 1941. Shortly before 8 a.m. that Sunday Japanese aircraft began an attack on the U.S. military bases in Honolulu. In Los Angeles it was about 11 a.m. when the radio reports reached us. I don’t remember whether the family had gone to church, which we would normally have done.

I do remember sitting in the front room of our house at 9121 South Dalton Ave., in the South West part of the city, listening to the radio as reports came in.

My mother was quietly distraught, as one of her sisters, Mary, and her husband and kids, lived in Honolulu. There was no way to find out if they had been hit by the attack. The phone lines were overloaded. It would be hours before the full scope of the attack would be clear. (As it turned out, Mary and her family escaped without injury). My father was unusually quiet. He put the three of us kids in the car, and with my mother, we took a long drive, not knowing what else to do. I was 12 years old.

I don’t remember the rest of that day, but I know that on Monday, when I went to Junior High School, I felt special pride as I saluted the flag. Any questions I might have about flags and patriotism would be many years ahead.

My father, who had the rank of Second Lieutenant in the Army Reserves, volunteered almost immediately, though at 38 and with three children he would have been exempt. I don’t know now how long before he was in active service.

My memories of the war period are scattered. I remember the night the searchlights were turned on, looking for a Japanese plane alleged to be over Los Angeles. Our neighbors on one side of us moved back to the Midwest, fearing an invasion. Of the roundup of the Japanese I remember nothing at all. Our schools were all white, as was our somewhat lower middle class neighborhood. So this terrible act was largely unseen.

(To the great credit of my Republican grandfather, he and my grandmother made regular trips to visit his secretary and her family, who had been interned. They named their first son after him, and that son was one of the pall bearers at his funeral).

All the world came to us by newspapers, radio, and the newsreels at the theater, between the double features. Because our country had been attacked (let’s leave aside all the political issues that led up to the Japanese attack) there was a sense of almost total solidarity with the government. We collected metal and grease. Butter, sugar, and bananas were rationed. (I thought they should have rationed carrots rather than bananas.) Meat, gasoline, were also rationed. Our parents all had ration books.

The news bulletins seem — if memory serves — to have come every 15 minutes all through the war. Brief bulletins on the early and terrible setbacks as the U.S. lost the Philippines. The Pacific Coast seemed open to attack, though of course the Japanese had no way at all to transport an invasion force.

(The closest we came to being attacked, as far as I know, was a Japanese submarine which surfaced off the coast near Santa Barbara and fired some shells inland. And, of course, the “fire balloons” the Japanese sent on the air currents, balloons timed to drop incendiary bombs when they reached Oregon and Washington. Those were hugely ineffective, though an inventive effort.)

While the attack had been from Japan, the war turned to the West and focused in the first year or two almost entirely on Europe. (One of the lingering questions is why Hitler declared war on the U.S. after the Japanese attack on Pearl Harbor. The Nazis were not bound by treaty to attack the U.S. The Axis alliance only called for each member — Germany, Italy, and Japan — to come to the aid of the others if they were attacked, but it didn’t obligate the countries to join in an attack which one of them had launched unilaterally.) 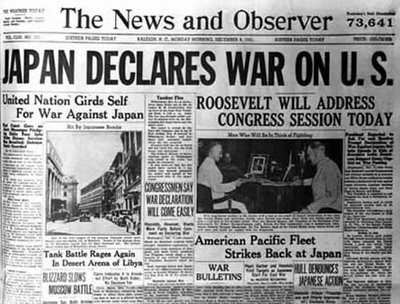 Image from The Legend of Pine Ridge.
It is true enough that my impressions of the war are those of a child, who watched the war from the age of 12 to 16. (And how eager I was to join the Marines and “fight the Japs.”) But my memories are of a time of almost total support for the government. What I think must be termed a “sense of the totalitarian.”

In Great Britain the old class lines were to a great extent overlooked, even erased. Germans rallied to the Nazi government as the U.S. and British bombing increased. The Soviets rallied behind Stalin (though in the very early days of the war, when the German armies moved into the Ukraine, some of the Ukrainians were happy to see them as liberators — if the Nazis had not made the mistake of mass killing of civilians they might have found an ally!).

I learned much later that a friend I met after the war, Robin Prising, had been imprisoned with his parents in terrible conditions in Manila. (Robin’s book, Manila Goodbye, is out of print but is a classic account of the Japanese occupation there and the eventual liberation of the Phillipines, by a boy who was then as young as I — very much worth reprinting or hunting down among used books.)

In that “totality” of war, Japanese became “Japs,” the Germans became “huns,” and of course, in one of the sleights of hand at which governments are so adept, the Soviet Union became a democracy until after the Allied victory. (To this day few Americans know that while we lost 683,000 men and women, the Soviet Union lost nearly 27 million — many of these civilians.)

When Roosevelt died, shortly before the end of the war in Europe, the radio broadcast nothing but funeral and classical music for three days. (There was no television.) I remember my High School teacher coming into class in tears to break the news of his death.

Hard, looking back, to realize that in the aftermath of that war, there was an almost universal (and genuine) determination that this had to be the last war, that the nations of the world would move to disarm. So much lay ahead, the liberations of the colonial world which came soon after the end of that war, the beginning of the Cold War, but on this day, December 7th,

I think back to the living room in Los Angeles, to the fear my mother did her best to hide, as she worried about her sister thousands of miles away, and my father, realizing he would feel compelled to volunteer.

What did we do with that victory? How can we, today, justify the tens of millions who died?