The playing field has never been level, but the advantages now enjoyed by the capitalist class in the electoral system have reached a qualitatively new high. 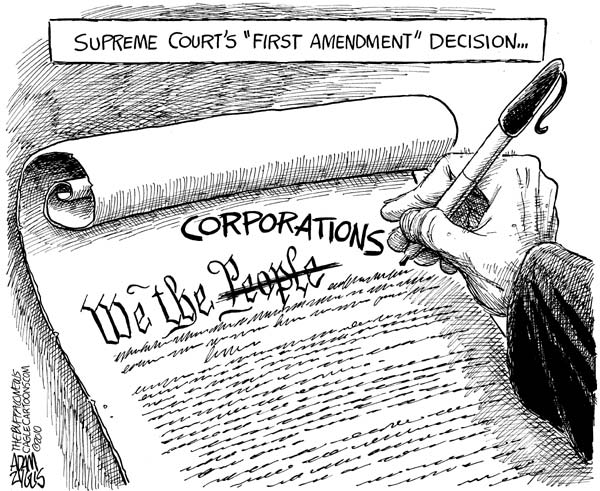 This article by The Rag Blog‘s David P. Hamilton is an extremely timely and relevant assessment of the state of politics in this country following the Supreme Court’s game-changing decision opening the floodgates to even greater corporate dominance of the electoral system — and after the many failures of the Obama administration in bringing about meaningful progressive change. We hope it will stimulate discussion in the progressive community.

However, to the extent that David is suggesting the left should boycott the electoral system, we strongly disagree — especially at this point in history — and that should not be taken to be The Rag Blog’s editorial position. We believe that — lacking a coherent strategy on the left that offers a clear and well-articulated alternative course of action to participation in electoral politics — it would be a self-defeating choice.

We believe, in fact, that everything possible must be done to stop the mushrooming anti-intellectual neo-nativist far-right surge, and strongly urge all of our readers to vote this Tuesday, November 2.

But our participation in electoral politics should be done with our eyes open and without unrealistic expectations. And we must always remember that voting is not enough. That our primary responsibility as progressives is to organize and educate outside the political system if we are ever to bring about meaningful basic social change.

The primary political story of this year’s midterm election flows from the Supreme Court’s recent “Citizens United vs Federal Election Commission” decision. This 5-4 decision held that corporate funding of independent political broadcasts in candidate elections cannot be limited under the First Amendment.

The already apparent result has been that millions of corporate dollars are flowing into the campaigns nationwide attacking Democrats. Sheila Krumholz of the Center for Responsive Politics predicts “$3.7 billion will be spent on this midterm election,” up 30% from the last midterm election. Spending on political ads has increased 75% compared to the 2008 presidential election year.

This flood of ungoverned cash is only just beginning.

This flood of ungoverned cash is only just beginning. Increasingly, these contributions are being made anonymously with impunity. Karl Rove now controls a campaign fund 10 times larger than that of the Republican National Committee, 95% of it from three militantly right-wing billionaires. The Chamber of Commerce, with 300,000 members, has raised a huge political fund and spent $28 million, largely from just 45 members, $7 million from “Swiftboat” Bob Perry of Houston.

Money coming from outside the country is also involved, but that fact is marginal to the larger issue. Amounts being spent by these political action committees to defeat Democrats are unprecedented. More than ever, elections are a commodity for sale and the price is being driven up so that only the very rich can afford them.

The consensus prediction of the outcome of the upcoming midterm elections is the widespread defeat of Democrats, losing control of the House and possibly the Senate too. This result will be determined primarily by the sad state of the economy and the failure of Obama’s leadership.

However, as a result of Citizens United the process has fundamentally changed. The playing field has never been level, but the advantages now enjoyed by the capitalist class in the electoral system have reached a qualitatively new high. The primary advantage of the right has been unleashed. Under the new rules governing political campaign financing, the capital class hegemony over the upper strata of U.S. government has been institutionalized.

Leftists have always argued that there is a U.S. capitalist ruling class with its power based in its control of the major corporations and that capitalist class money corrupts elections. Because of the lack of public funding and the high costs associated with running for office, big private sector money has long been necessary to be a serious player.

However, in the past there were legal limitations on corporate contributions that allowed non-corporate elements to compete, albeit at a financial disadvantage, usually losing to the better financed candidates. The restrictions that remain are quickly becoming irrelevant and no new ones can be reasonably expected from a government increasingly beholden to corporate capitalist interests.

NPR recently reported that one Republican-supporting political action fund, among many, was spending over $100,000 for negative advertising at just one small market newspaper in one closely contested congressional race. That’s the new norm. Millions in these funds are currently being spent to defeat progressives like Alan Grayson of Florida. The possibility of public funding of elections coming from politicians in the service of big capitalist interests is slight indeed.

The capitalist ruling class has globalized. They are no longer the U.S. ruling class so much as the largest national sector of an increasingly integrated international ruling class. Capital knows no borders. You can buy any publicly held stock in the world in dozens of stock markets worldwide 24/7. The heretofore essential countervailing sector, labor, has no chance to exert close to an equivalent influence while operating in a national context.

What has changed is the depth and reach of capitalist ruling class control. Like their wealth, their power has grown exponentially; they have increased their range of operation and become internationally integrated in recent years. In the U.S., their control has now become enshrined in the basic law of the land.

In this stagnant democracy where, outside of presidential elections, large majorities don’t participate, the Republicans have correctly adopted the Rovian strategy emphasizing base mobilization rather than appealing to the largely mythical center. Thus, their motivating ideology has become more radically rightist. Disguising their racism as concern for immigration, crime, busing, private education, etc, is their specialty.

As a silver lining to this dark cloud, it is logical to assume that more people will see the validity of the assertion that democracy in America has been corrupted by corporate money. The socialist left should grow in the context of imperial decline and political polarization. Never has serious reform looked more improbable and never have the culprits looked so conspicuous.

If elections have become a fraud perpetrated upon the public, is participation in them unprincipled in that it lends credence to this fraud? Should we encourage people to vote for liberal Democrats or Greens or anyone when we know the game is rigged? Must we accept competition on an unlevel playing field on our opponent’s home turf with them providing the referees?

Is authentic democracy impossible under the current system?

Or should we instead be encouraging the refusal to participate in corrupt elections? Is authentic democracy impossible under the current system? Should a primary goal of the left in the future be to delegitimize this corrupt electoral system? Is that impossible if you participate?

This hypothesis concerning the reach and power of capitalist class control has been substantiated by Obama. Given a unique opportunity to lead toward real change, he has instead proven himself to be just another politician who protects the interests of the capitalist class first and foremost.

During the 2008 presidential campaign while standing in front of an Austin audience, he repeatedly called himself a “progressive.” That was pure pandering. Instead, his administration has expanded American militarism with more money and more U.S. troops fighting in more countries than ever; has produced a health care “reform” that in no fundamental way reforms health care, that mandates you buy a faulty product in the private sector, and that was written largely by health industry lobbyists; and has passed financial “reform” written by lobbyists for the financial sector and their past executives now working within the Obama administration after first forking over hundreds of billions of your tax dollars to “stimulate” them instead of us.

Obama’s administration has failed to curb corporate compensation; has failed to close Guantanamo and has expanded CIA assassination programs that include the targeting of American citizens (later defending the practice in court as a “state secret”); has raided the homes and offices of antiwar leaders and confiscated their records; has failed to help millions faced with foreclosure after promising to do so and has announced it will appeal any court ban on future foreclosures while continuing to bail out investment banks who leveraged up the housing bubble.

The administration has shown itself unwilling to pressure Israel to make peace with the Palestinians; has done next to nothing to end the Drug War; has allowed environmental disaster in the Gulf through incompetence and a failure of regulatory oversight and then quickly lifted the ban on deep water drilling, etc, ad nauseum.

Now the Obama Justice Department has successfully appealed the federal judge’s ruling that “Don’t Ask, Don’t Tell” is unconstitutional. Before a national audience this ex-professor of constitutional law achieved his nadir of veracity by arguing that protecting gays from continued oppression by the military was best accomplished by a legislative branch that had only recently refused to do so and where his majority is about to shrink if not disappear.

This was soon followed by news that Obama’s “Justice” Department will defend Bush’s attorney general, John Ashcroft, against legitimate charges that after 9/11 he ordered Muslim Americans to be held without charges, denied them access to lawyers, and had them carried off to secret prisons and tortured.

Obama’s record is only progressive in comparison to reactionary Republicans and its lack of progressivism is the principal reason for the “enthusiasm gap.” Next week, the Republicans will get no more votes nationwide than they got when they were soundly defeated in 2008. However, the Democrats will receive many fewer than 2008. Most of those who have abandoned Barack Obama are to his left. Meanwhile, most Democrats continue to pursue the outmoded strategy of appealing to moderates.

Of course, merely not voting is an insufficient response. Denouncing the process would be not only truthful but very likely a productive strategic innovation for the left in the future — to picket polling places, to urge people to deface ballots, to publicly destroy registration cards like Vietnam-era draft cards and to proselytize around the analysis that the electoral system and the politicians it produces are inherently corrupt.

Fundamental reforms that reverse Citizens United, ban corporate money from political campaigns altogether, and establish publicly-funded elections are reasonable and popular but unachievable goals in the present political context and, hence, revolutionary. This irreconcilable conflict of fundamental interests will promote political instability that will increase as this corruption becomes more glaring, entrenched and widespread.

[David P. Hamilton has been a political activist in Austin since the late 1960s when he worked with SDS and wrote for The Rag, Austin’s underground newspaper.]

3 Responses to David P. Hamilton :
‘Citizens United’ and the corruption of American politics