The artificial boundaries after the British and French carved up the region are increasingly irrelevant. 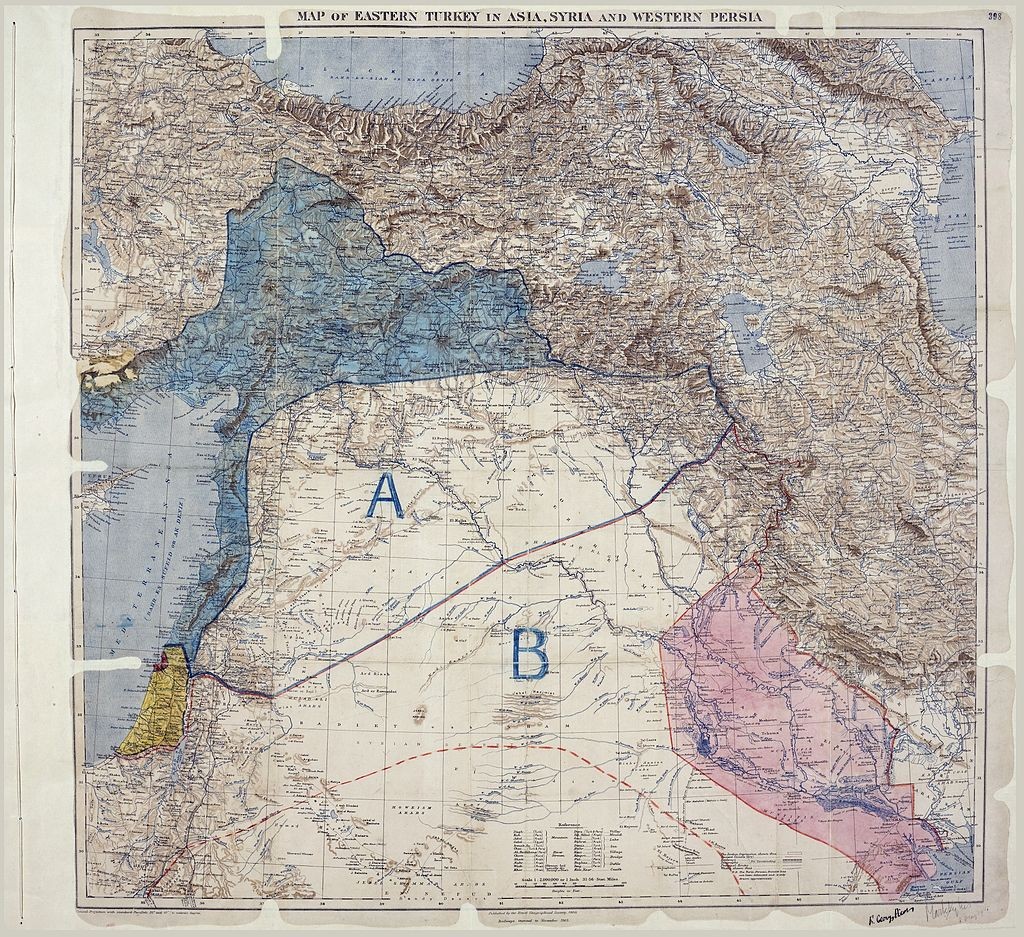 Sykes-Picot map of 1916: “A” goes to France, “B” to Britain. Image from the National Archives / Public Domain.

“One day during the [Versailles] Peace Conference [ending WWI], Arnold Toynbee, an adviser to the British delegation, had to deliver some papers to the prime minister. “Lloyd George had forgotten my presence and had begun to think aloud. ‘Mesopotamia, yes, oil, irrigation, we must have Mesopotamia; Palestine, yes, the Holy Land, Zionism, we must have Palestine; Syria, h’m, what is there in Syria? Let the French have that.’”
— Paris 1919 by Margaret MacMillan, p. 381

It took more than the musings of British Prime Minister Lloyd George to make it happen, but that’s more or less how the current countries of the Middle East were created. Their boundaries were essentially drawn by the British and French after WWI to suit their own interests.

The Ottoman Empire, having joined the wrong side in the war, was being dismembered by the victorious European colonialists. The British forces occupied Baghdad and controlled the valleys of the Tigres and Euphrates Rivers. Hence, they got the oil, which they knew to be there in abundance, plus Palestine for sentimental reasons. The French got the leftovers, primarily the coastal regions where the French-speaking Maronite Christians lived plus a bunch of desert to the east.

These new national boundaries incorporated diverse groups with deep historic animosities and established homelands. Iraq was composed of three provinces of the Ottoman Empire, Mosul (Kurdish), Baghdad (Sunni) and Basra (Shia). This volatile combination was held together by colonial occupation and local strongmen for decades, during which time a certain amount of integration occurred. That ended when George W. Bush decided to invade. By the destruction of the preexisting stasis, the U.S. invasion begot rampant sectarianism and the multi-party civil war that we have now.

In the process, those artificially imposed borders have become increasingly irrelevant, as the indigenous populations settle back into their ancestral boundaries and rivalries. The Kurds control the north, including Kirkuk, but not Mosul — yet. The Shia control their area from Baghdad to Basra and east to Iran and are a virtual protectorate of two antagonists simultaneously, Iran and the U.S.

Assad hangs on to the only part of Syria that really matters to him, the west, with its mountains, seacoast, and diverse population. He’s allied with Russia and Iran because everyone else is trying to kill him. In the vast swath of desert in between, the Sunnis, currently led by the Islamic State, rule over next to nothing. There are few resources out there, so they will seek to encroach on Kurdish and Shia areas, where the oil and water is.

The fighting that is now taking place
will define new borders.

The fighting that is now taking place will define new borders. One likely result would be four countries instead of two; western Syria reduced to something more like Lebanon, Sunniland (a proxy of Saudi Arabia) in the middle, Shialand (a proxy of Iran) to the east and Kurdistan in the northeast, the nexus of a greater Kurdistan that would aspire to incorporate Kurds in Iraq, Syria, Iran and Turkey.

So we have great prospects for continued friction between Saudi Arabia and its Sunni proxies vs. Iran and its Shia proxies and the Kurds vs. every country that helps keep them the world’s largest nationality without a homeland. Outside forces — the US, Israel and Russia in particular — will stir the pot, attempting to have proxies of their own.

Sometimes, these complicated configurations will lead to strange alliances, such as Iran and the U.S. backing the Shia government in Baghdad at the same time that the U.S. is supposedly allied with Saudi Arabia to fight (Sunni) ISIS, which Saudi Arabia is actually funding to fight the Shia in Baghdad and the secular Assad, who the U.S. hates too because he’s allied with our ally against ISIS, Iran. Is that clear?

Whenever you hear some U.S. diplomat talking about getting the government in Baghdad to extend the olive branch to the Sunni and incorporate them into the government, he/she is dreaming. That’s not going to happen. A unified Iraq, its borders a relic of colonialism, is a fiction.

[David P. Hamilton, a graduate of the University of Texas at Austin in history and government, was an activist in 1960s-’70s Austin and was a contributor to the original Rag. David and wife Sally spend part of every year in France. ]