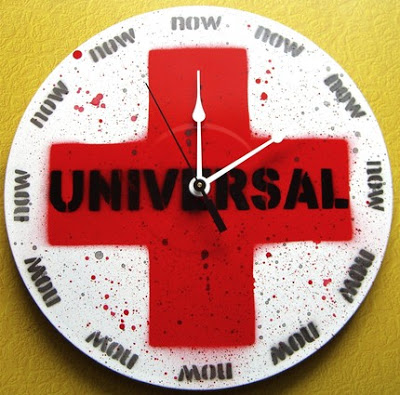 In essence, health care should be a human right, not a commodity. It should not be restricted to those who can afford it and you shouldn’t have to risk your life in the military for it either. This principle is universally acknowledged, except here. The right to health care is the only position with any moral credibility.

Having turned 65 and being an army veteran, I am the recipient of two kinds of U.S. government run, single payer health care.

A comparison between the “socialist” care I get now and the much higher costs and relative inefficiency of health care previously provided to me through private insurance speaks strongly to our need for fundamental reform of the US health care system.

In 1964, as a privileged white boy with some college but poor mechanical skills, the army made me administrative personnel, initially as a clerk/typist and later as a “personnel management specialist.” Further fortuitous circumstances landed me at a division headquarters an hour south of Paris, where we very seldom suffered the privations of being “in the field.”

Having an 8 to 5 desk job allowed me to pursue other interests, like socialism and why I opposed the Vietnam War. My desk was lined with controversial books, from “The Communist Manifesto” to Bernard Fall. My commanding officer, reputedly educated as an economist at Abilene Christian College, took note and we debated. My pièce de résistance in this argument was my essay comparing US Army society with a Soviet-style communist society. They both had caste like hierarchical command structures that told you where to go and what to do – even to kill people – without recourse other than jail or desertion. They both supplied all essentials like food, clothing, housing, education, transportation, health care and political indoctrination. Everything else they made available at subsidized prices. There was no meaningful democracy and they both opened your mail with impunity (as happened to me).

There are some negatives about VA health care. The VA is underfunded. I shouldn’t have to go to Temple or San Antonio to get into a veteran’s hospital. They don’t have cutting edge gear. On average, their doctors are probably paid less than doctors are in private practice, hence, according to capitalist thinking, the market dictates second stringers. However, private doctors have told me that working for the VA is well compensated, has good working conditions and may also attract those less materially motivated.

There is also my existential discomfort being in a waiting room full of men, many broken physically and psychologically by their military experiences, who still revel in their military memories as if that had been their finest hour; a “Korea ‘52-‘53” bumper sticker on the back of a wheel chair. Often they have sales of memorabilia in the waiting room -– unit and campaign baseball caps (“Khe Sanh – ‘68”), decoration replicas of all types, but no “Vet for Peace” items. Another negative is the rent-a-cop at the front door who mechanically asks everyone entering if they’re carrying weapons. I always tell him, “Only my mind.” He shows no expression.

But the positives outweigh the negatives. First, VA health care is very cheap. Being relatively middle class, I pay a nominal amount on a sliding scale, but it is very little. Buying two medications regularly under my private health insurance used to cost me $50 a month at the pharmacy. At the VA, those medications cost me $15 for three months and they’re mailed to my house, over a 90% savings. I get bills from the VA for office visits and diagnostic procedures, but they are minuscule compared to what I paid for private health care.

Even better is the speed, integration and comprehensiveness of the care. I can walk in unannounced any day and go to the walk-in clinic. I’ll wait a while, but get to see a doctor about my complaint relatively quickly. I have a regular GP doctor there who calls me in every six months for another check up. They take the initiative to make the appointment and call me – and send me reminder letters – informing me of the time. The supportive lab work is done there too. Many specialists are in house. I now regularly see a rheumatologist there.

When any doctor or nurse working there needs to refer to my complete medical history, they just make a few key strokes and it appears on their computer screen. If they want me to have a blood test or an x-ray (or a sonagram or an EKG) they just hit a few more key strokes and send me down the hall for the procedure. Typically, I’m back in 30 minutes with the results already in their computer. If they want to order a medication, a few more key strokes and it’s ready for me down the hall at the pharmacy. They even have masseurs and nutrition counselors.

The VA is more proactive than my previous private system. Besides the regular physicals, both my doctors at the VA have called me at home after reviewing tests to have me come back in for immediate follow ups. They also honor patient driven care. I refused the first medication recommended by the rheumatologist and wanted guidance on holistic approaches. She acknowledged not having the requisite knowledge to provide that guidance, but loaned me her copy of the Arthritis Foundation’s book on alternative therapies. Then, without complaint, she provided pamphlets describing the various pharmaceuticals available to treat rheumatoid arthritis and let me choose those I was willing to take. If there is a specialist they don’t have in house, they refer you to one in private practice with the VA picking up the tab. In my experience, waiting time to see any of these specialists is less than it is to get such an appointment in private medicine.

There are occasions, however, where one wants cutting edge care or a diagnostic procedure (e.g., CT scan) more quickly or closer than the VA can provide. For that, Medicare, my other “socialist” plan, kicks in. It’s not so great, but beats the alternatives. I pay almost $100 a month for it, but there are no co-payments for office visits. This compares with $300 a month plus co-payments and deductibles under the retired teachers group plan I had previously. Although supplemental insurance from the teacher’s group covering what is not covered by Medicare costs me another $100 a month, my costs are still considerably less than what they were before I turned 65 for the same services.

“The United States continues to spend significantly more on health care than any country in the world. In 2005, Americans spent 53% per capita more than the next highest country, Switzerland, and 140% above the median industrialized country”, according to research from the Johns Hopkins Bloomberg School of Public Health. 47 million Americans, 15% of our population, have no health care coverage at all. As a direct result, the U.S. is 45th in life expectancy, behind Jordan and Bosnia, and 42nd in infant mortality, behind Cuba. These dismal figures are quite simply because we have capitalist, for profit, private health care and countries with lower costs and better outcomes have socialized public health care. The US health care system is a disgrace and should be exhibit A in how the private sector does a far worse job than government at providing essential public services.

Obama might have to spend hundreds of billions annually to establish a government run, single payer system, but it will quickly drive down prices, allow the American public to save hundreds of billions more on their health care costs and will produce better health care outcomes. The only losers would be the owners of the bloated and pampered private health insurance and pharmaceuticals industries. Health care remains one of the only remaining growth industries in the current economy and the factors driving that growth will continue in a public system.

In essence, health care should be a human right, not a commodity. It should not be restricted to those who can afford it and you shouldn’t have to risk your life in the military for it either. This principle is universally acknowledged, except here. The right to health care is the only position with any moral credibility. Some capitalists losing money as a result of the change to a public system is a small price to pay and has no moral equivalence. Our pragmatic president should see that publicly funded health care for all is not only the moral high ground, but also politically popular and the only system that is economically sustainable.

4 Responses to David P. Hamilton: Socialized Medicine Works for Me