David Richards : The Judge Who Brought Justice to Texas 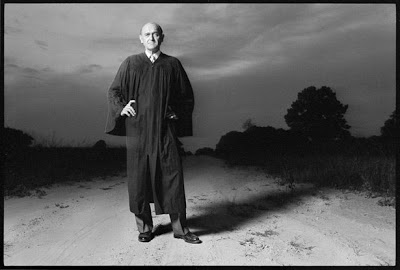 William Wayne Justice, a federal district judge who ruled on ground-breaking class-action suits that compelled Texas to integrate schools, reform prisons, educate illegal immigrants and revamp many other policies, died [October 13, 2009] in Austin. He was 89.
[….]
Judge Justice was a small-town lawyer active in Democratic Party politics when President Lyndon B. Johnson appointed him to the federal bench of the Eastern District of Texas in 1968. Sitting in Tyler, Tex., he came to be called the most powerful man in Texas by those who agreed with his largely liberal decisions and the most hated by those who differed.

In a 1998 column in The Fort Worth Star-Telegram, Molly Ivins made what she called the “painfully obvious point” that Judge Justice had lived up to his name, saying he “brought the United States Constitution to Texas.”

The same year, Lino Graglia, a constitutional law professor at the University of Texas at Austin, said in an interview with The Dallas Morning News, “He has wreaked more havoc and misery and injury to the people of Texas than any man in the last 25 years.”

Judge Justice’s death has produced an outpouring of admiration, all of it justified and understandable. He was a remarkable figure in the state’s history. The only thing I might add is a bit of historical perspective. I spent many hours in his court and come from the same Texas political generation. Indeed at one point we were friendly rivals for a vacancy on the Fifth Circuit that didn’t come our way, I have always assumed that for differing reasons, we were each too off the wall for the Carter administration.

The Judge grew up in East Texas-Henderson County. These roots are fundamental to understanding his career. He was one of that rare breed of East Texas liberals who opposed the racism that dominated Texas, especially East Texas, in that era. He practiced law in Athens with that great democrat and social renegade, Bill Kugle. The two of them were major activists in the Frankie Randolph-Ralph Yarborough wing of the democratic party, a wing that was decidedly anti-Lyndon Johnson in the 1950’s.

Johnson’s 1968 appointment of Justice to the federal bench has always struck me as a bit of a surprise given Johnson’s reputation for long memory. In all events the Judge hit the ground running, as the sitting federal judge in Tyler, Texas. His predecessor had been a defender of the conservative establishment and civil rights issues had not been welcome in his court.

In that time long hair seemed to threaten all school officials. Tyler Junior College prohibited beards and long hair on male students. In one of his early decisions Justice declared the rules unconstitutional. Shortly thereafter, in another case, he ordered the closing of the Black high school and integration of the students into the all-white schools of Tyler. Although this decision ultimately brought Earl Campbell, and a state football championship, that did nothing to assuage the anger of the white community.

These decisions insured that the Judge became from the get-go a total pariah in his home community, an animosity that endured throughout his life in Tyler. Paul Burka has written movingly on the subject of the ostracism and threats the Judge and his family faced in Tyler. This was not like a judge sitting in some urban metropolis where a degree of anonymity might be available, Judge Justice was exposed on a daily basis to the vitriol and somehow managed to maintain his equilibrium. Indeed his outside family was largely his staff and the young liberal law clerks who clamored for the opportunity to work for him.

In the not so secret world of lawyers, venue is frequently the linchpin of success in litigation. Where a case is tried may be the most important factor in outcome. In short order the handful of Texas civil rights lawyers began to beat a path to Tyler, where the Judge heard every case filed in federal court.

He issued landmark decisions on reform of the Texas juvenile justice system, the Texas prison system and the education of alien school children, to name just a few. Predictably, the Tyler docket became overcrowded and a new judge was assigned to hear a portion of the cases. We were forced to scramble a bit in our venue search; for a while one was assured of getting Judge Justice if you filed in Sherman, Texas, then that forum became uncertain. In my last filing before him I had to pursue the Judge to Paris, Texas, where for a short time he had the entire docket.

Most of my cases before the court involved voting rights, principally concerning the Black community. Judge Justice played a key role in the establishment of single member district representation in the Texas Legislature and in city councils and school boards across the state. In the early 1970’s I filed a series of cases in East Texas challenging city and county election systems. It was my first real exposure to the isolation and victimization of the rural black community of the State.

As a result of Judge Justice’s rulings we had some successes. A Black County Commissioner was elected in Nacogdoches; he was believed to be the first Black elected official since reconstruction in that part of the world. Some other victories followed in Palestine and Lufkin. The striking thing to me was the realization that throughout the East Texas Black community Judge Justice was viewed almost like a Messiah. While he was an anathema to the white establishment, he gave to the beleaguered Black world hope that they had never enjoyed before. Things were never the same again in East Texas.

Wayne Justice was a great and courageous man who chose a lonely and difficult path, and pursued it with good humor and intelligence.

[David Richards is a renowned Texas civil rights lawyer and sometimes writer. He is the author of Once Upon a Time in Texas: A Liberal in the Lone Star State . He lives in Austin.]

Read more about the death of Judge William Wayne Justice: