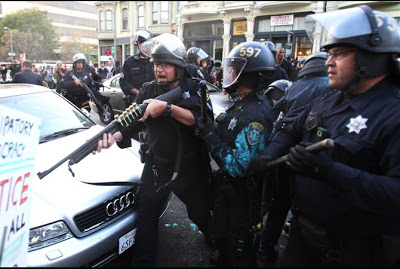 Scott Olsen, who served two tours of duty in Iraq, was struck in the head with what the City of Oakland glibly referred to as a ‘projectile,’ fracturing his skull.

On Tuesday, October 25, in Oakland, California, a member of Veterans for Peace who was peacefully standing with Occupy Oakland demonstrators was shot in the head by Oakland police and is in a hospital in serious condition with a fractured skull.

The veterans were doing that in Oakland Tuesday in an effort to calm the tense situation as armed Oakland police, dressed in riot gear, were preparing to attack the peaceful Occupy Oakland encampment while the demonstrators were refusing to leave.

The police opened fire with so-called “non-lethal ordnance.” Scott Olsen, who served two tours of duty in Iraq, was struck in the head with what the City of Oakland glibly referred to as a ‘projectile.” The “non-lethal projectile” fractured Olsen’s skull. He is reportedly in serious but stable condition.. Olsen was wearing a shirt conspicuously identifying him as a Veteran for Peace.

[The Huffington Post reported Thursday night that Scott Olsen’s condition had been updated to fair and that he is now breathing on his own. His roommate, Keith Shannon, reported that Olsen “needs surgery to relieve the pressure on his brain and it will happen in a day or two.” Olsen remains sedated.]

It is also reminiscent of the U.S. government’s brutal attack in 1932 on the “Bonus Army” of 10,000 World War I veterans who were peacefully encamped in Washington, D.C., seeking payment of the bonuses they were promised for their faithful service in the Great War, which they needed to help them survive the desperate economic situation of the Great Depression.

Veterans for Peace and the Iraq Veterans Against the War plan to conduct a mass demonstration outside the Oakland Police Department today. The radio news story I heard this morning stated that Veterans for Peace is asking people to go to the Occupy locations in their own cities today and stand in solidarity with Scott Olsen and his fellow veterans.

[Oakland Mayor Jean Quan’s rather remarkable statement below marks a watershed for the burgeoning American Occupy movements. Cast against the backdrop of Wednesday’s fully-militarized Oakland City Center, Quan’s effusively conciliatory remarks can only be interpreted as an admission that turning downtown Oakland into a war zone to roll up a tent-city encampment did not work.

It should be noted that adherence to nonviolent discipline on the part of the Occupy Oakland organizers and all the protesters that participated throughout the day was a critically important factor in forcing the City of Oakland’s hand. Brute-force police oppression of the Occupy movement has taken its best shot. It is possible that nonviolent resistance has prevailed. — Marc Ash / Reader Supported News.]

I want to thank everyone for the peaceful demonstration at Frank Ogawa Park tonight, and thank the city employees who worked hard to clean up the plaza so that all activities can continue including Occupy Wall Street. We have decided to have a minimal police presence at the plaza for the short term and build a community effort to improve communications and dialogue with the demonstrators.

99% of our officers stayed professional during difficult and dangerous circumstances as did some of the demonstrators who dissuaded other protestors from vandalizing downtown and for helping to keep the demonstrations peaceful. For the most part, demonstrations over the past two weeks have been peaceful. We hope they continue to be so.

I want to express our deepest concern for all of those who were injured last night, and we are committed to ensuring this does not happen again. Investigations of certain incidents are underway and I will personally monitor them.

We understand and recognize the impact this event has had on the community and acknowledge what has happened. We cannot change the past, but we are committed to doing better.

Most of us are part of the 99%, and understand the spirit of the Occupy Wall Street Movement. We are committed to honoring their free speech right.

Finally, we understand the demonstrators want to meet with me and Chief Jordan. We welcome open dialogue with representatives of Occupy Wall Street members, and we are willing to meet with them as soon as possible.