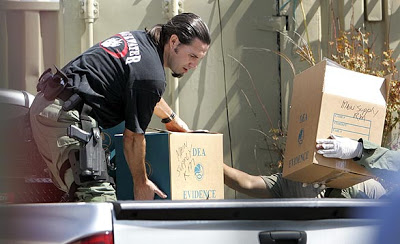 Blackwater does the DEA’s job in Culver City, Cal.
‘I guess none of their usual buddies were available’
By Rebecca Saltzman

Last week the DEA raided a medical marijuana dispensary in Culver City, Cal., spending hours on site detaining employees and ultimately leaving the facility in disarray. This is unfortunately not an unusal story. Since 2005, the DEA has raided dozens of state-sanctioned dispensaries in California.

But this time was different. We’re used to the DEA calling in help from various federal agencies and local law enforcement. But I guess none of their usual buddies were available yesterday because from the picture below, which appeared in the LA Times today, it looks like they had to resort to calling in Blackwater:

The DEA often likes to say that medical marijuana is not their top priority (though at the height of the raids last year, they were raiding an average of one dispensary per week). They like to argue that medical marijuana raids do not take resources away from other drug interdiction. Yet this photo [above] makes me wonder – if they have sufficient resources to shut down meth labs and to bust medical marijuana providers, why do they need the help of Blackwater, a private agency?

Yet another reason we need Congress to hold oversight hearings on DEA medical marijuana activities. Good to know that House Judiciary Committee Chairman John Conyers is concerned about this issue and has already begun to question the DEA on its actions.