Dear Sen. Cornyn : You Have Pork for Brains 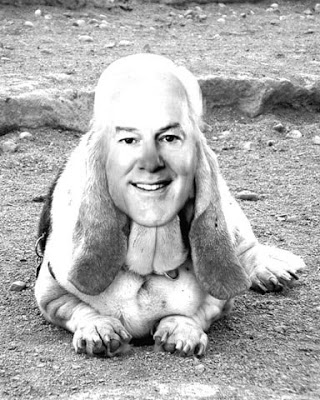 Senator Cornyn: ‘Your political ambitions are clearly far more important to you than the well being of ordinary Americans who are losing their jobs in the millions.’

I just sent Sen. John Cornyn [Very R-TX] an email to tell him the biggest piece of pork I saw in the neighborhood of the economic stimulus plan was the pork in the place where his brains should be, and mentioned that it’s called being “pigheaded.”

Your political ambitions are clearly far more important to you than the well being of ordinary Americans who are losing their jobs in the millions. If you really want to fix everything with tax cuts and let the state budgets, education, alternative energy solutions, and affordable health care continue to be in the hands of the so-called “free market”. . .

Well. . . then I threatened to camp out on his lawn in a tent and hunt squirrels for dinner if it got to that point, and suggested if he gets his way he won’t be able to find a cop to throw me off his lawn because they’ll all be out preventing food riots.

It was fun, a kind of catharsis.

Being a gentleman, he wrote right back to thank me “for contacting his offices” and attached my letter in case I might have forgotten what I had just said. He closed with his “warmest regards.”

I sent KB Hutchinson a much nicer note, trying to shame her into looking at herself in the mirror and doing what she knows is the right thing. Girl talk, you know.

Geez, these people make me so mad!!

As an officially “unemployed” person, I wish we could’ve organized a “million-person unemployed vigil” on the mall today. Or at least a few people holding up a continuous string of paper dolls representing each of the 3.5 million unemployed plus their 2.5 (or whatever it is these days) children. The numbers don’t have faces and the Republicans don’t have any shame.

1 Response to Dear Sen. Cornyn : You Have Pork for Brains