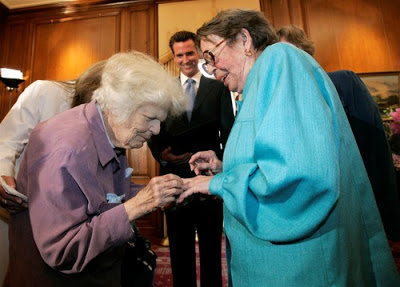 Del Martin, a strident and eloquent voice in the early gay and lesbian civil rights movement in America, died Wednesday in San Francisco not long after enjoying perhaps the hardest-won prize of her lifelong cause — legal marriage to Phyllis Lyon, her longtime partner. Martin was 87.

As a journalist, author and organizer, Martin helped shape the modern lesbian, gay, bisexual and transgender movements by coming out early and crafting her arguments for equal rights and common decency with intelligence and a firm grounding in civil rights law. Her writings and activism inspired the generation of lesbian activists now at the forefront of the movement — women like Gloria Nieto of San Jose.

“None of this would have been possible without Del and Phyllis,” Nieto said from the Billy De Frank Center in San Jose, a gay and lesbian social center. As De Frank’s political director, Nieto is trying to head off Proposition 8, a ballot initiative that threatens to outlaw gay marriage in California. “Every time I run into a rough patch, I keep telling myself I’m doing this for Phyllis and Del.”

Nieto said she was a politically tentative, nervous young lesbian in college before reading “Lesbian/Woman,” a book written in 1972 by Martin and Lyon.

“It was a profound impact on me to be in college and that book told me I wasn’t the only one, we weren’t the only ones, that you could be lesbian and enjoy life, be yourself and have basic rights just as everyone else.”

Nieto met regularly with Martin and Lyon when she was director of a health center named after the couple. Unable to afford a honeymoon, Nieto and her fiancee recently arranged a kind of “honeymoon” consisting of bringing sandwiches to the Martin-Lyon household and simply spending time at the feet of their role models.

“They graciously agreed and invited us into their home,” Nieto said. “Now it’s not going to happen. This is hitting me really hard.”

Dorothy L. Taliaferro, or “Del,” was born in San Francisco on May 5, 1921. Showing a sharp mind and an early academic bent, she was salutatorian of the first graduating class of George Washington High School and went on to study journalism at the University of California-Berkeley and San Francisco State University. At 19 she married James Martin. The couple had a daughter, Kendra, before their divorce.

Martin met Lyon in Seattle in 1950 when they worked for the same publishing company. Three years later, on Valentine’s Day, they moved in together in San Francisco in the small house they would share for life.

In one of the formative acts in their movement, the lesbian couple and six other women in 1955 founded the Daughters of Bilitis, a social support group named after a 19th-century French book of lesbian poetry.

One of its founders was Clara Brock of Santa Clara, who at 81 fondly remembers the Bilitis meetings that Martin and Lyon hosted in their house.

“How they put all of us in that little house was a miracle,” Brock said with a laugh. “There was a lot of planning going on about strategy, but there was a lot of friendliness, too. The group started mostly as a social one, then it evolved into more of an activist group.”

Brock said Martin was the quiet one in the couple, preferring to let Lyon talk away. Martin was the one to chime in now and then with dry, witty comments or jokes in light moments or with well-developed opinions during strategy sessions.

In 1956 Brock mimeographed and helped distribute the group’s monthly newsletter, the Ladder, written and edited mostly by Martin and Lyon. According to Nieto, though the newsletter forcefully advocated an end to discrimination against homosexual men and women, it was wrapped in brown paper and omitted the return address. That changed, Nieto said, with the arrival in San Francisco of Harvey Milk.

“He was a hippie and out in the open,” Nieto said, “who believed the answer for the gay community was in visibility, not hiding in the corners anymore. He had a profound impact on Del and Daughters of Bilitis.”

The anonymous brown wrapping came off the humble newsletter and by 1970 it had become a magazine with thousands of readers worldwide. Martin’s many contributions included essays, editorials, short stories and snappy missives.

In one of her most well-read, “If That’s All There Is,” published in 1970, she tore into the sexism she believed relegated lesbians to lower standing and power in the fledgling gay rights movement.

In addition to her work with the Bilitis group, Martin lobbied San Francisco City Hall to end police harassment and to decriminalize homosexual behavior.

She was a co-founder or early member of several local and national feminist or gay rights groups, including the National Organization for Women and the Bay Area Women’s Coalition.

Wiggsy Sivertsen, a stalwart in gay activism locally and a student counselor at San Jose State University, was only a teenager when Martin co-founded the Daughters of Bilitis.

“It was very scary in 1955,” Sivertsen remembered. “The police were actively finding ways to harass the community. There was no hugging, no holding hands in public, nothing at work that said you were gay or lesbian. Martin had a profound impact for all of us.”

Martin and Lyon were the first couple in line to be “remarried” in San Francisco earlier this year when the California Supreme Court declared marriage for same-sex couples a fundamental right. The couple had become lead plaintiffs in the case after their first marriage, along with thousands of others recognized legally by Mayor Gavin Newsom, was nullified by a lower court.

1 Response to Del Martin, Eloquent Voice of Gay and Lesbian Movement, Dead at 87