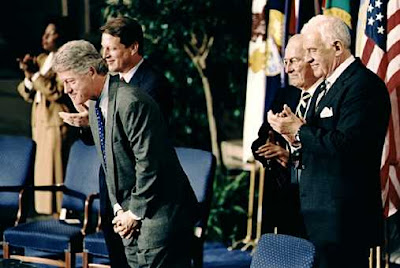 Psst! George Bush has a secret.

While you Democrats are pounding each other to a pulp in Pennsylvania, the President has snuck back down to New Orleans for a meeting of the NAFTA Three: the Prime Minister of Canada and the President of Mexico.

You’re not supposed to know that – for two reasons:

First, the summit planned for the N.O. two years back was meant to showcase the rebuilt Big Easy, a monument to can-do Bush-o-nomics. Well, it is a monument to Bush’s leadership: The city still looks like Dresden 1946, with over half the original residents living in toxic trailers or wandering lost and broke in America.

The second reason Bush has kept this major summit a virtual secret is its real agenda. More important, the agenda-makers, the guys who called the meeting, must remain as far out of camera range as possible: The North American Competitiveness Council.

Never heard of The Council? Well, maybe you’ve heard of the counselors: the chief executives of Wal-Mart, Chevron Oil, Lockheed-Martin and 27 other multinational masters of the corporate universe.

And why did the landlords of our continent order our presidents to a three-nation pajama party? Their term is “harmonization.”

Harmonization has nothing to do with singing in fifths like Simon and Garfunkel. Harmonization means making rules and regulations the same in all three countries. Or, more specifically, watering down rules – on health, safety, labor rights, oil drilling, polluting and so on – in other words, any regulations that get between The Council members and their profits.

Take for example, pesticides. Wal-Mart and agri-business don’t want to reduce the legal amount of poison allowed in what you eat. Solution: “harmonize” US and Canadian pesticide standards to Mexico’s.

Can they do that? Can Bush just say, “Eat your peas – even if they’re radioactive?” Under NAFTA, at least the way George Bush reads it (or has it read to him), he can. At any rate, he does.

Read all of it here. / TomPaine.com / The Rag Blog

This entry was posted in RagBlog and tagged Capitalism, Economy, Environment, Free Trade. Bookmark the permalink.