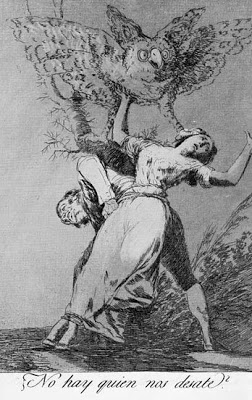 “Can’t Anyone Untie Us?” by Francisco de Goya.

It wasn’t the housing bubble exactly. It was more the way the bubble was blown.

In the official language of the International Monetary Fund report for April 2009, “the crisis was largely caused by weak risk management in large institutions at the core of the global financial system combined with failures in financial regulation and supervision.”

After “the crisis” was caused, the weak risk managers along with their failed regulators and supervisors came back to loot the national debt.

In essence, the mortgage of the American Worker has been preyed upon to inflate the wealth and power of financiers. Twice.

From the IMF point of view, more debt looting or “fiscal adjustment” will be necessary to keep the world economy from worse channels of trouble. And so long as the money makes genuine entry into the credit system at lenient rates (if not terms), then it seems like sensible advice. I believe the IMF when it claims that worse trouble is possible.

And yet, behaving like crash victims who climb from wrecks and run around for awhile, whole classes of boosters may be seen doing double flips of joy because they think they feel the world bouncing off its bottom.

There are many gloomy charts in the IMF report on the global economy, but the one that chills me most shows how each economic region of the globe is expected to contribute to the world recovery that (we hope) will begin later this year.

When it comes to the crucial turning point for that recovery, the US is the only portion of the global economy that completely disappears from the bar graph. The US will make zero contribution to global growth in the 4th quarter of 2009, then a bit of a negative contribution in the 1st quarter of 2010, before slacking to zero again in the 2nd quarter of 2010.

As for “other advanced countries,” you will find them colored in dark blue below the line of recovery, indicating that they will be worse than no help. Above the line of positive Purchasing Power Parity, all the heaving lifting at the beginning of the second decade of the 21st Century will be upon the shoulders of China and the “rest of the world.”

This, my friends, is how you win a cold war without knowing the least reason why.

Along with my favorite storm watcher these days, Larry Kudlow, I also have faith that democracy and capital will figure out how to keep each other alive through this deluge, but I disagree with his forecast model.

For the past several decades capital has taken advantage of weakened democracy in the US. It is now time for democracy to return the favor. As US capital returns from subzero on the IMF recovery scale, democracy has to insist on new parameters.

If the Chinese can lead global growth in 2010, what happens to the claim that big governments must be incapable?

Therefore, health care coverage for all people, cap and trade for all creatures, a path to citizenship for every neighbor in the neighborhood, and a genuine national youth program, all of these things will elevate the US to a place we should have been 30 years ago.

[Greg Moses is editor of TexasWorker.Org. He can be reached at gmosesx@gmail.com.]