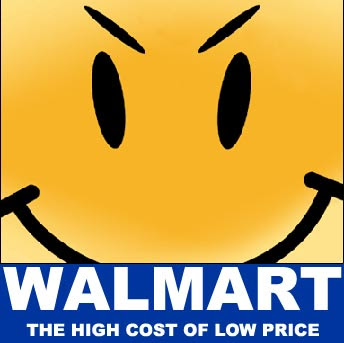 Of all companies to be whining about money. WAL*MART the so-called American company with 600 factories in CHINA and zero in America, they have the audacity to be pushing this line on their underpaid front-line employees.

While Lee Scott and the Waltons live in huge mansions and travel with bodyguards, paid for by the labor of their employees, these folks have the audacity to “fear” their employees into voting AGAINST their own pocketbook.

This is the same company that encourages its underpaid workers to seek out gov’t assistance.

This company is as tolitarian as any country could be. If you are a manager or supervisor at WAL*MART, you are expected to “goose-step”…

Wal-Mart Stores Inc. is mobilizing its store managers and department supervisors around the country to warn that if Democrats win power in November, they’ll likely change federal law to make it easier for workers to unionize companies — including Wal-Mart.

In recent weeks, thousands of Wal-Mart store managers and department heads have been summoned to mandatory meetings at which the retailer stresses the downside for workers if stores were to be unionized.

According to about a dozen Wal-Mart employees who attended such meetings in seven states, Wal-Mart executives claim that employees at unionized stores would have to pay hefty union dues while getting nothing in return, and may have to go on strike without compensation. Also, unionization could mean fewer jobs as labor costs rise.

The actions by Wal-Mart — the nation’s largest private employer — reflect a growing concern among big business that a reinvigorated labor movement could reverse years of declining union membership. That could lead to higher payroll and health costs for companies already being hurt by rising fuel and commodities costs and the tough economic climate.

The Wal-Mart human-resources managers who run the meetings don’t specifically tell attendees how to vote in November’s election, but make it clear that voting for Democratic presidential hopeful Sen. Barack Obama would be tantamount to inviting unions in, according to Wal-Mart employees who attended gatherings in Maryland, Missouri and other states.

“The meeting leader said, ‘I am not telling you how to vote, but if the Democrats win, this bill will pass and you won’t have a vote on whether you want a union,'” said a Wal-Mart customer-service supervisor from Missouri. “I am not a stupid person. They were telling me how to vote,” she said.

“If anyone representing Wal-Mart gave the impression we were telling associates how to vote, they were wrong and acting without approval,” said David Tovar, Wal-Mart spokesman. Mr. Tovar acknowledged that the meetings were taking place for store managers and supervisors nationwide.

Wal-Mart’s worries center on a piece of legislation known as the Employee Free Choice Act, which companies say would enable unions to quickly add millions of new members. “We believe EFCA is a bad bill and we have been on record as opposing it for some time,” Mr. Tovar said. “We feel educating our associates about the bill is the right thing to do.”

Other companies and groups are also making a case against the legislation to workers. Laundry company Cintas Corp., which has been fighting a multiyear organizing campaign by Unite Here, relaunched a Web site July 14 called CintasVotes. The site instructs visitors to take action by telling members of Congress to oppose the legislation.

“We feel it’s important that our employee partners fully understand the implications that the Employee Free Choice Act could have on their work environment and benefits,” said Heather Trainer, a Cintas spokeswoman.

Business-backed organizations are also running ads aimed at building opposition to the bill, including the Coalition for a Democratic Workplace, which counts several hundred industry associations as members. Another group, the Employee Freedom Action Committee, is run by former tobacco lobbyist Rick Berman. The groups, which aren’t affiliated with each other, say they have a total of $50 million in funding. Neither will disclose which companies or individuals have provided funding.

The U.S. Chamber of Commerce has made defeat of the legislation a top priority. In the past six months, it has flown state and local Chamber members to Washington to lobby members of Congress. On Thursday, the Chamber began airing a television ad in Minnesota and plans to run ads in other states as part of a broader campaign.

The bill was crafted by labor as a response to more aggressive opposition by companies to union-organizing activity. The AFL-CIO and individual unions such as the United Food and Commercial Workers have promised to make passage of the new labor law their No. 1 mission after the November election.

First introduced in 2003, the bill came to a vote last year and sailed through the Democratic-controlled House of Representatives, but was blocked by a filibuster in the Senate and faced a veto threat by the White House. The bill was taken off the floor, and its backers pledged to reintroduce it when they could get more support.

The November election could bring that extra support in Congress, as well as the White House if Sen. Obama is elected and Democrats extend their control in the Senate. Sen. Obama co-sponsored the legislation, which also is known as “card check,” and has said several times he would sign it into law if elected president. Sen. John McCain, the likely Republican presidential nominee, opposes the Employee Free Choice Act and voted against it last year.

Wal-Mart’s labor-relations meetings are led by human-resources managers who received training from Wal-Mart on the implications of the Employee Free Choice Act.

Wal-Mart may be walking a fine legal line by holding meetings with its store department heads that link politics with a strong antiunion message. Federal election rules permit companies to advocate for specific political candidates to its executives, stockholders and salaried managers, but not to hourly employees. While store managers are on salary, department supervisors are hourly workers.

However, employers have fairly broad leeway to disseminate information about candidates’ voting records and positions on issues, according to Jan Baran, a Washington attorney and expert on election law.

Both supporters and opponents of the Employee Free Choice Act believe it would simplify and speed labor’s ability to unionize companies. Currently, companies can demand a secret-ballot election to determine union representation. Those elections often are preceded by months of strident employer and union campaigns.

Under the proposed legislation, companies could no longer have the right to insist on one secret ballot. Instead, the Free Choice, or “card check,” legislation would let unions form if more than 50% of workers simply sign a card saying they want to join. It is far easier for unions to get workers to sign cards because the organizers can approach workers repeatedly, over a period of weeks or months, until the union garners enough support.

Employers argue that the card system could lead to workers being pressured to sign by pro-union colleagues and organizers. Unions counter that it shields workers from pressure from their employers.

On June 30 the National Labor Relations Board ruled that Wal-Mart illegally fired an employee in Kingman, Ariz., who supported the UFCW and illegally threatened to freeze merit-pay increases if employees voted for union representation. The decision came eight years after the organizing campaign failed, and four years after the case was originally heard.

“We’ve always maintained the termination was not related to the union and that there was nothing unlawful about an answer provided an associate about merit pay,” said Mr. Tovar, the Wal-Mart spokesman. “Following the decision, we were considering offering reinstatement, but that is on hold, since the [union] appealed the decision.”

Unions consider the Employee Free Choice Act as vital to the survival of the labor movement, which currently represents 7.5% of private-sector workers, half the percentage it did 25 years ago. The Service Employees International Union said the legislation would enable it to organize a million workers a year, up from its current pace of 100,000 workers a year.

The business-backed lobbying groups are running ads in states where a win by a Democratic Senate candidate would boost support for the legislation in the Senate, saying the loss of secret ballots exposes workers to bullying labor bosses. In one, they use an actor from the “Sopranos” TV series about mob life to hammer home their point.

Business groups say they’re the underdogs since they will be outspent by unions by a wide margin. Labor has pledged to spend $300 million on the election and securing passage of the Employee Free Choice Act, compared with under $100 million by business groups, according to Steven Law, chief legal officer of the U.S. Chamber of Commerce. The Chamber’s strategy is to focus on the Senate, where labor needs eight more supporters of the legislation to reach the 60 votes needed to overcome a filibuster.

“This is a David-and-Goliath confrontation, but we believe we’ll have enough stones in the sling to knock this out,” said Mr. Law.

Wal-Mart is a powerful ally. Through almost all of its 48-year history, Wal-Mart has fought hard to keep unions out of its stores, flying in labor-relations rapid-response teams from its Bentonville, Ark., headquarters to any location where union activity was building. The United Food and Commercial Workers was successful in organizing only one group of Wal-Mart workers — a small number of butchers in East Texas in early 2000. Several weeks later, the company phased out butchers in all of its stores and began stocking prepackaged meat. When a store in Canada voted to unionize several years ago, the company closed the store, saying it had been unprofitable for years.

Labor has fought back with a campaign to portray Wal-Mart as treating its workers poorly. The UFCW helped employees file a series of complaints about the company’s overtime, health-care and other policies with the National Labor Relations Board. Dozens of class-action lawsuits were filed on behalf of workers, many of which are still winding their way through the courts.

Wal-Mart has been trying to burnish its reputation by improving its worker benefits and touting its commitment to the environment. On the political front, it’s hedging its bets, spreading its financial contributions on both sides of the political divide.

Twelve years ago, 98% of Wal-Mart’s political donations went to Republicans. Now, as the Democrats seem poised to gain control in Washington, 48% of its $2.2 million in political contributions go to Democrats and 52% to Republicans, according to the Center for Responsive Politics, a nonpartisan organization that tracks political giving.

Go here to tell the FEC to investigate Wal-Mart.

One Response to Democrats and Labor : Wal*Mart Running Scared