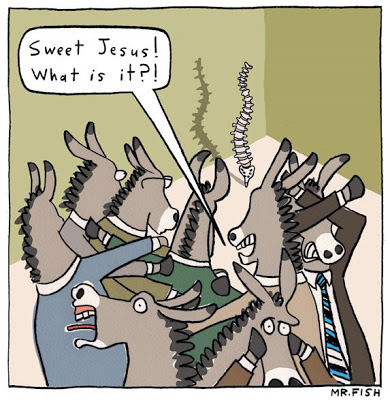 The least popular, most lawless president in American history took to the Rose Garden today to thank congressional Democrats for having unprotected political sex with him. For caving — not compromising, but totally capitulating — on war funding and and telecom immunity, Nancy Pelosi, Stenny Hoyer and the blue dogs they lie down with have been rewarded with the same herpetic embrace that is turning John McCain into a Republican cootie incubator.

The Democrats’ motive, of course, is mixed; one part fear of losing telecom campaign contributions, one part fear of being called terrorist-lovers, appeasers and similar bad names by Republican crooks, liars and smear-merchants in the coming campaign. The irony, of course, is that even though Democrats gave Bush and Cheney the very barebacking they wanted, the Republicans are already calling Democrats, and will continue to call them in the fall, America-haters, while the phone companies, having nowhere else to go to rent a congressional majority, would have continued to fatten Democratic coffers anyway.

The media, of course, are similarly rewarding the Democrats’ strategic brilliance at taking cut-and-run and Al-Qaeda off the table by calling this the rout, thumping and complete White House victory that it actually is. Now it’s not just John McCain, whose late efforts to distance himself from his own Party’s leader on climate change, offshore drilling and other toxic issues have been foiled by Bush’s brand; Democrats, too, are learning what it’s like to earn the moniker of DeLay’s third Congress.

Makes you wonder how far the Democrats are willing to go to win the love of the loathed playground bullies. Let Joe Lieberman keep his committee chairmanship? Make bipartisan loviedovie with Newt Gingrich? Take impeachment off the table? Oh, wait.