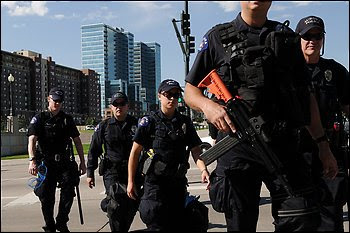 Two days before the start of the Democratic convention, police patrol Cuernavaca Park in Denver. The city has spent a year gearing up. Photo by Joshua Duplechian / Rocky Mountain News / AP.
Looks like they’re preparing for martial law
By Eli Saslow / August 24, 2008

DENVER — To the uninformed visitor, it has become difficult to tell whether Denver is preparing for a Democratic National Convention or the institution of martial law. Helicopters filled with armed commandos swooped over downtown in a training exercise earlier this summer. A warehouse was converted into a temporary jail with chain-link fences and signs threatening the use of electric stun devices. Travel agents sold getaway packages to locals, with one company imploring residents to “escape town while you still can.”

Hosting a convention necessitates preparing for the worst, Denver Mayor John Hickenlooper said, and his city has accomplished that with gusto. The possibility of protesters hurling buckets of feces? Denver proposed an ordinance to prevent it. The threat of crowd violence? The city spent $2.1 million on “personal protection equipment” for police.

More than 50,000 visitors will descend on the Mile High City this week, and Denver has spent the past year plotting ways to avoid public embarrassment. The city studied previous convention disturbances and negotiated with several groups that are planning to protest. With an international audience of media members, delegates and the Democratic Party elite expected to arrive this weekend, Denver hopes to capitalize on a chance to re-image itself as “more than a second-tier town,” Hickenlooper said.

“The nice thing about hosting one of these conventions is that you can show off,” said Hickenlooper, a Democrat who will speak on the opening night of the convention. “We don’t want some traffic jam, protest or unfortunate incident to become the big story, because there’s too much good stuff going on here. We have the infrastructure to be prepared to handle anything.”

Denver worked hard to procure such a visible moment. The city submitted convention bids in 2000 and 2004 but didn’t advance deep into the selection process, in part because it lacked enough hotel rooms. After another four years of growth — Colorado is one of the 10 fastest-growing states in the nation — Denver submitted a bid for the 2008 convention.

In its pitch, Denver highlighted the Rocky Mountain region’s potential to include several swing states. Once solidly Republican, Colorado has a Democratic governor and a Democratic majority in the legislature for the first time in half a century. Nevada and New Mexico also could flip from red to blue in the coming election.

The Democratic National Committee announced that Denver defeated New York City to win the bid in January 2007. DNC Chairman Howard Dean cited “recent Democratic gains in the West” as the primary motive for his decision. By coming to Denver, Dean said, Democrats hoped to signal their intent to compete for votes in the Mountain West.

It was a significant victory for the Mile High City, which has always suffered from something of an inferiority complex. Even though it ranks as one of the country’s top 20 metropolitan areas, with a thriving tourism industry and four major professional sports teams playing downtown, Denver residents say their city is often misrepresented as a cow town stuck in the middle of flyover country.

“We’ve always had to overcome this idea that we’re not big enough or important enough to even be part of the national political landscape,” said Elbra Wedgeworth, president of the convention’s host committee. “That was part of the idea behind wanting to get the convention in the first place. If people see Colorado and the Western spirit, they’ll get past all of that.”

But the past year also has provided a long and painful lesson in the downsides of hosting a convention, Denver officials said. The city struggled to raise the $50 million it promised to convention organizers. It received a $50 million federal grant for security, but that money has disappeared quickly, officials said.

“There are some security measures in place that will be seen, and some that will be unseen,” said Malcolm Wiley, spokesman for the Secret Service. “We have a subcommittee to address any possible thing that can happen.”

What, exactly, can Denver expect this week? That’s difficult to predict, experts said. Conventions have transpired without major unrest since riots broke out at the 1968 Democratic convention in Chicago. Four major protest groups — one called Recreate ’68 — plan to demonstrate in Denver, mostly to demand more rights for immigrants and an end to the Iraq war. Organizers said they expect more than 25,000 protesters to participate, with the stated goal of derailing convention proceedings.

Denver already has experienced a few security scares. Sen. John McCain’s area headquarters here received an envelope containing white powder last week, and four employees went to the hospital for examination before officials determined the powder was not lethal. Earlier in the summer, a marijuana advocacy group gathered downtown and started beating people with bats. Police rushed to the scene — only to realize the protest was staged and the bats were inflatables.

In the local newspapers, Denver officials have outlined several worst-case scenarios: Protesters might chain themselves together with chicken wire, use quick-setting cement to block streets or threaten delegates with violence. One city councilman said anarchists had rented a house in Denver and stocked it with urine, which would be sprayed on crowds as they entered the Pepsi Center.

Protesters denied all of the above.

The protest groups responded by outlining a worst-case scenario of their own. Law enforcement officials might arrest nonviolent demonstrators and use aggressive force whenever necessary, protesters said. The groups described an arsenal of high-tech weaponry they expect to encounter: guns that shoot sticky film and rubber bullets; machines that emanate ear-piercing sound waves; microwave devices that create a burning sensation on the skin.

Denver said it will not use any of the above.

“Basically, what’s happening is a cat-and-mouse game,” said Adam Jung, organizer of a protest group called Tent State University, which plans to demonstrate in a 50,000-foot “freedom cage” outside the Pepsi Center. “The city keeps coming up with new restrictions on us, and we figure out ways to get around them. That’s how it’s going to go, until one of us gets the last word.”