Denver : Under the Big Top 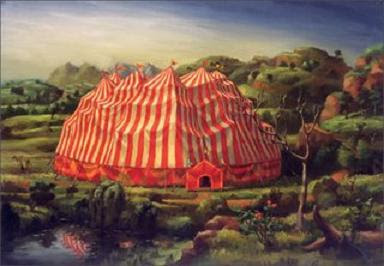 Progressives have a big tent at the Dem Convention
By Steven Rosenfeld / July 14, 2008

A tent for 800 journalists, bloggers and activists will be set up at Denver’s Democratic Convention site.

Few activities are more filled with political insiders than national political party conventions. But this August in Denver, a coalition of progressive groups hopes to broaden the coverage and conversation surrounding the Democratic Convention by hosting 800 bloggers, nonprofit leaders and independent journalists.

ProgressNow.org, the largest online community in Colorado; the Alliance for a Sustainable Colorado; and Daily Kos will put up a big tent next to the Pepsi Center, where writers, bloggers and activists can cover the convention and showcase a progressive agenda.

“There are two things we want to accomplish,” said Bobby Clark, ProgressNow deputy director. “The first is to give access to people who are often left out, who don’t have a seat at the table. This is not just bloggers, but independent media and nonprofit leaders. It’s about access.”

“We also want to broaden the conversation during the convention,” he said. “We will be hit over the head by the mainstream media with political process stories. Lost in that coverage will be the fact that 48 million Americans don’t have health insurance and issues like that. So we want to generate content that can get out that week.”

An estimated 15,000 members of the media are expected to go to Denver, with approximately 5,000 receiving credentials to attend the official proceedings. Only 125 bloggers will be credentialed.

The solution is called “the big tent,” a 9,000-square-foot, two-story, fully wired platform for alternative coverage and a stage for newsmakers that will be a counterpoint to the usual convention activities such as the adoption of the party platform; nomination of both a vice presidential and presidential candidate; speeches and rallying of campaign workers by party leaders; and a not-insignificant amount of elbow-rubbing by political insiders.

“There is a bigger conversation we want to have,” Clark said. “The political process is one way to accomplish change. But that is not the only way to do it. A blogger spending 20 hours a week above their day job doing work that is not in the press is another way. Another is solutions from the country’s progressive leaders.”

The air-conditioned tent will accommodate 800 people, Clark said. It will be on a lot next to the Alliance Center, a green building that is home to a range of nonprofits such as Common Cause, the Sierra Club, Center for Native Ecosystems and others. It is walking distance from the convention site. Sponsors also include Digg.com, Google.com and YouTube.com.

Many bloggers and independent journalists have complained that the convention press credential process (like the GOP, the Democratic Party stopped accepting applications this past April 15) excluded them and suppressed voices that were not from mainstream media organizations. Clark said the big tent idea, which is new to national political conventions, created a solution that the party supports.

“There has been some dialogue on the blogs,” he said, referring to frustration with official credentials. “One reason we wanted to do this was we anticipated that not as many bloggers would be accommodated. The convention committee is happy that we are doing this. They wanted there to be more bloggers who are coming. There is so much pressure on everyone. We also have way more requests than we can accommodate.”

The big tent site is outside the convention’s security perimeter, which has been the focus of other recent reports concerning how the city’s police will allow protests and other First Amendment activities. In Denver, local police have reportedly allocated $5 million to buy new weapons for convention security. While law enforcement has voiced concerns about possible terrorism, activists who are planning anti-war and immigrant rights demonstrations in Denver are wary of police intentions.

In Denver, like in cities that have hosted previous national political conventions, there have been confirmed reports of spying by police on activists and organizations who want to express their views while the nation is focusing on the presidential nominee. One disturbing twist this year is reports that local police will be equipped with weapons designed for use in the war in Iraq.

Police will not comment; however, news organizations have reported that police may be buying exotic equipment such as pepper-ball rifles to control unruly crowds and guns that fire a rubbery mass that keeps people and vehicles from moving. Congress has appropriated $100 million to assist with security at the Democratic and Republican conventions.

Clark said he did not know what law enforcement officials’ plans were.

“I hope that everyone is able to exercise their free speech rights,” he said, referring to anti-war, immigrant rights and other groups that reportedly were planning demonstrations in Denver.

[Steven Rosenfeld is a senior fellow at Alternet.org and co-author of What Happened in Ohio: A Documentary Record of Theft and Fraud in the 2004 Election, with Bob Fitrakis and Harvey Wasserman (The New Press, 2006).]