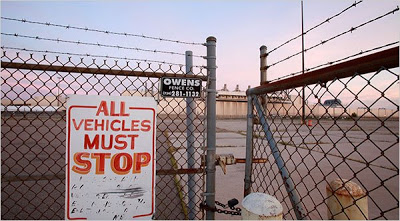 The Wixom Assembly Plant in Wixom, Mich., was one of Ford’s largest and oldest facilities, but it has been dormant since it closed in May 2007. Photo: Fabrizio Costantini/New York Times.
When Auto Plants Close, Only White Elephants Remain
By Bill Vlasic and Nick Bunkley / July 30, 2009

WIXOM, Mich. — The sheer size of the sites has inspired grand visions for redevelopment — a $1 billion football stadium, a huge Hollywood movie studio, even the world’s largest indoor tennis complex.

But for the communities saddled with a huge, empty auto plant, the reality is dismal.

Since 2004, General Motors, Ford and Chrysler have closed 22 major auto plants in the United States. Only eight of those have found buyers. And in the wake of the G.M. and Chrysler bankruptcies, another 16 plants will be shut by 2011.

The most optimistic redevelopment proposals, like a football stadium for the Atlanta Falcons or a movie studio in the small Michigan town of Wixom, a Detroit suburb, are long shots at best.

“The plants, whether they’re still standing or reoccupied, are always going to be a haunting reminder of what we were, what we’ve gone through, and where we still need to go,” said Representative Thaddeus McCotter, Republican of Michigan, whose district includes an old Ford plant in Wixom and a G.M. plant that will soon close.

Even sites in attractive locations are hard to sell in the weak economy. With so many companies being squeezed financially, there is a glut of available commercial real estate.

“Even if you only go back three or four years, it was easier than today,” said Phil Horlock, head of Ford’s land development division.

The loss to the local community when a plant closes goes well beyond jobs. Tax revenue evaporates and related businesses vanish.

Industry analysts estimate that each job in a plant helps create another five to seven jobs.

“Some of those are direct suppliers, but then there are places that workers spend money, like grocery stores, restaurants and day care,” said Kristin Dziczek of the Center for Automotive Research in Ann Arbor, Mich.

Ford’s 4.7-million-square-foot Wixom factory, which closed in 2007, was the company’s largest assembly plant in the United States. More than six million cars were built there over 50 years.

At its peak in the late 1980s, the factory employed nearly 4,000. Now it’s an empty shell of rusting corrugated metal, surrounded by desolate parking lots and a barbed-wire fence.

The plant fronts an Interstate highway, and stretches almost a mile along Wixom Road. It once provided 40 percent of the town’s property taxes, but now accounts for less than 15 percent.

The town has about 13,000 residents, and relied heavily on the paychecks of plant workers.

“When it closed, a lot of businesses around us closed too,” said Moe Leon, owner of the Bullseye Sports Bar and Grill on Wixom Road. “We’re fighting night and day to stay above water.”

Last year, a team of executives from Warner Brothers toured the plant as a potential site for a new studio. Other developers have floated proposals for a hotel, an ice hockey arena and a business district devoted to green technology.

Ford officials said several ideas were under consideration, but there was no timetable for a sale.

Mr. Horlock said Ford had sold five large factories in the last five years. He said the company generally did not raze a plant, or begin to clean up any toxic wastes, until a deal was sealed.

The auto company sold one assembly plant, in Lorain, Ohio, to a developer who leases out space to small industrial firms. Honda, a competitor of Ford’s with two assembly plants in Ohio, recently started storing excess inventory of cars and minivans in the plant’s parking lots. But most closed plants languish.

After G.M. closed a factory in Doraville, Ga., last year, there was an initial rush of interest from developers. One of them suggested the site be used for a new stadium for the National Football League’s Falcons, but the team’s owners have so far shown little enthusiasm for that idea.

Luke Howe, an assistant to Doraville’s mayor, said other proposals for the 165-acre site range “from the ridiculous to the sublime,” and no developers had come forward with adequate financing.

“We knew it would be a lengthy process,” he said. “It just happened to fall during one of the worst economic times.”

But some factory sites have remained vacant through good times as well — a sign of just how difficult it is to create a second life for them.

G.M. demolished most of its giant Buick City manufacturing complex in Flint, Mich., a decade ago. The 200-acre property appeared to finally have a future as a transportation hub for long-haul trucks and rail cars, but G.M. could not complete a deal before filing for bankruptcy on June. 1.

The Flint site, along with dozens of other factories and properties, is part of the old G.M. that is still in bankruptcy and will most likely be sold, eventually, in the liquidation process. The company’s best assets were transferred to a new corporate entity that now operates as General Motors. Auto companies sell their old plants for a song, compared to what they put into them. The government in Oklahoma County, which covers much of Oklahoma City, for example, paid $55 million last year for a four-million-square-foot plant that will be leased to the United States Air Force to expand a nearby base. Just eight years ago, G.M. invested $700 million in the plant to modernize it.

Environmental problems can also hamper a sale. While every plant has different pollution issues, G.M.’s restructuring chief, Albert A. Koch, estimated in bankruptcy court that the company’s liabilities for all its closed sites was $530 million.

One old G.M. plant that has found a new life is in Linden, N.J. The company shut down the factory in 2005, demolished it two years ago, and sold it to a developer for a mixed-use project called Legacy Square.

The 104-acre site will be anchored by a Super Wal-Mart store, and ultimately will pay more taxes to the city than G.M. did.

“The United Auto Workers had very high-paying jobs there, and those will not be comparable to the jobs that are going to be in the shopping mall,” said Linden’s mayor, Richard J. Gerbounka.

But, he added, “We’re better off than having 104 acres of vacant property sitting there.”

The worst of the empty auto plants is located, perhaps fittingly, on the downtrodden east side of Detroit.

The 3.5-million-square-foot factory has been crumbling since the Packard Motor Car Company closed its doors more than 50 years ago. Trees grow on the plant’s roof, and chunks of concrete regularly fall from the bridge that connects two of its buildings.

Trespassers often explore its rotted interior, and photographs and videos of the ruins are easily found on the Internet.

Vandals have set fires several times this year in the piles of wooden pallets, tires and garbage that litter the complex. It is not unusual to see clouds of thick smoke pouring from the building on a summer evening.

This entry was posted in RagBlog and tagged Automobile Industry, Capitalism. Bookmark the permalink.