Dick J. Reavis : Are Hoover and Obama Peas in a Pod? 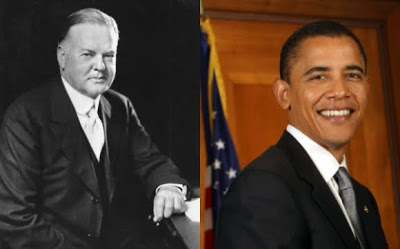 Herbert Hoover and Barack Obama: Peas in a pod? Image from Decline of the Empire.
The more things change…
The Obama tax compromise

The story below is from the January 3, 1931 issue of the Southern Worker, a newspaper published by the Communist Party USA in Birmingham and Chattanooga, 1930-37.

WASHINGTON, D.C. — In the midst of mass starvation Andy Mellon’s treasury department of the federal government refunded $126,838,333 in taxes to the wealthy bosses of the country during the last year.

This sum is more than the paltry $116,000,000 appropriated by Congress for fake unemployment relief after so much bickering and Hoover’s talk about runs on the treasury. While millions of workers and farmers are starving, the government not only does all in its power to prevent any increase in taxation of the rich but actually returns them millions of dollars while talking of a treasury shortage.

At the same time figures released by the government show that in 1928 income tax returns revealed that there were 511 people in the country who had a yearly income of over $1,000,000, an increase of 221 over the previous year. These exploiters made their millions out of the workers and farmers who are now starving to death.

The United States Steel Corporation, which runs the Tennessee Coal and Iron Company in and around Birmingham, and has been laying off men by the thousands and cutting wages, received $15, 265, 343 in refunded taxes for the year. And Andy Mellon is one of the steel corporation men, and the money is turned over in cold cash.

In the face of those cold figures which show on which side of the line property lies, Hoover and Congress talk of the paltry sums appropriated for so-called relief as something the workers should be thankful for to the end of all time. This is nothing but plain robbery of the masses by a handful of people, the greatest criminals the world has ever known. These farts should give more energy to the unemployed workers in their fight for unemployment insurance and relief in cash which, as is seen, lies in plenty in the pockets of the bosses.

[Dick J. Reavis is an Associate Professor of English at North Carolina State University who is indexing the Southern Worker. He can be reached at dickjreavis@yahoo.com.]

2 Responses to Dick J. Reavis : Are Hoover and Obama Peas in a Pod?