Distribution of Wealth : Way Out of Whack 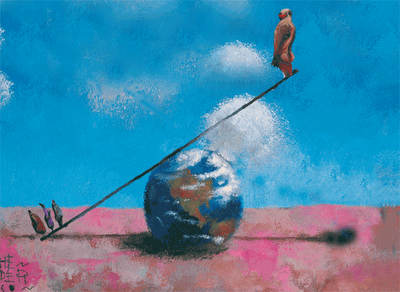 Image from OECD / CBS News.
Trickle UP theory:
The recession and its roots

Have you ever wondered just what caused the deep recession that the United States is in? Many people believe it was the meltdown of Wall Street and the financial industry. That was the trigger that began the recession, but was it the true cause of it? Robert Reich has a very good article in The Nation that the folks over at Alternet have reprinted.

Reich agrees that the Wall Street meltdown was the trigger to the recession, just as the Wall Street disaster in 1929 triggered the Great Depression. But the real cause of both the current recession and the Great Depression was the absurdly lopsided distribution of income. In 1928 the income distribution had reached a point where the top 1% of the population was making 23.9% of all income in the United States. With only 76.1% of the country’s income left for 99% of the country’s people, the situation created was like a loaded gun waiting for something to pull the trigger (and that trigger was pulled with the Wall Street crash of 1929).

Conservatives don’t like to admit it, but a capitalist economy such as ours simply cannot function correctly when such a large proportion of the country’s income is going to such a small percentage of it’s people. The country did not pull out of that depression until the income was redistributed in a more equitable way. This was accomplished by the New Deal programs putting people to work, World War II (which employed even more people), the GI Bill (which educated many soldiers, qualifying them for higher-paying jobs), the Great Society, which decreased the number of people in poverty, and higher income taxes.

By the 1970’s the income percentage of the top 1% had been reduced to around 7% or 8% of the nation’s total income — a much more manageable figure. But the Great Depression had taught the Republican Party nothing it seems. In 1980, Ronald Reagan became president and began the process of again redistributing the income toward the top 1%.

The Republicans did this with a really good propaganda campaign which convinced many Americans that a “trickle down” theory of economics would work. This was the idea that if we just let the rich make more and more money, then they would share it with the rest of us — in other words, it would trickle down and benefit all Americans. Sadly, all it did was fatten the bank accounts of the rich.

The Republicans redistributed the country’s income by busting unions, deregulating the stock market and the financial industry, severely cutting social programs, deregulating college tuitions (which priced college out of the budgets of many Americans), and by repeatedly and radically cutting taxes for the richest Americans. By 2007, the top 1% of Americans was again controlling 23.5% of this country’s total income.

Once again the country’s economic gun was loaded and cocked. The trigger was pulled by the meltdown of the financial industry. Reich says the reason this has not caused another depression was the bailout of the financial industry with the TARP funds. I’m not so sure we have yet escaped that. The bailout saved the financial giants and the rich, but many smaller banks have gone under (and it’s still happening), and all but the rich are still mired in a deep depression because of the loss of 12 to 15 million jobs. We may still see a deeper recession (depression?) because the jobs situation has not been adequately addressed and the income distribution is still way out of line.

So what can be done to cure the current recession? Further deregulation or tax cuts will not help. That would only exacerbate the situation and make the income distribution problem even worse (which was the cause of this mess in the first place). The problem must be attacked on a broad front by government targeted at re-distributing the country’s income. Conservative’s hate the term “income redistribution,” but they have been doing just that for the last 30 years. The problem is they have been redistributing the income away from the people who need it and toward the richest among us. This process must be reversed.

The government must spend a lot more money on job creation. Much of this can be directed at the private sector through the building and revamping of our transportation infrastructure (bridges, streets and highways, mass transit, trains, etc.). They could also create government programs to clean up and improve our National Parks, wetlands, monuments, and other things along the lines of the New Deal’s WPA and CCC.

Another thing needed is a massive influx of money into low-cost and easy-to-pay-back loans for small businesses (since small businesses provide the bulk of jobs in this country). These small businessmen and -women are hurting too, and they are certainly not among that richest 1% of Americans. Although the government bailed out the financial giants, these financial giants have not repaid Americans by making loans available to small businesses as they should have. They have instead used that money to speculate in the stock market and give themselves enormous bonuses.

A couple of other things that could be done: strengthen worker unions and have the government provide a much larger portion of the money needed for a college education. Strengthening unions would insure workers’ wages and benefits and guarantee that those workers receive their fair share of increased production. Paying a much higher portion of the cost of a college education would once again let all Americans take advantage of educational opportunities to create a better and higher-paying future for themselves.

Finally, income taxes should be raised significantly on the richest Americans — especially that top 1%. I know the right-wingers will whine that this would hurt job creation. That is false. High taxation does not cause job losses and low taxation does not create jobs. Businesses will hire only the number of workers needed to appropriately deliver their goods or services to their customers — regardless of what the tax rate is.

In fact, there is a good argument to be made that our country prospers the most when the rich are highly taxed (as they were during the boom times of the 1950s). For one thing, it helps to distribute the country’s income more evenly and fairly. It also encourages business interests to re-invest their excess income back into their business to save on the taxes they would owe, thus creating new jobs and helping the economy (and creating even more income for the business).

The right wing will scream that much of what I have proposed will increase our already large deficit. That is true. But it must be done if we are to stave off an even deeper recession and eventually pay off that deficit. As the income is redistributed and jobs are created there will be an ever increasing number of people paying taxes. The higher taxes on the rich and the increasing number of tax-paying workers will pay down the deficit as these proposals begin to take effect.

11 Responses to Distribution of Wealth : Way Out of Whack