Do The Shoes Impact Daily Life in Baghdad? 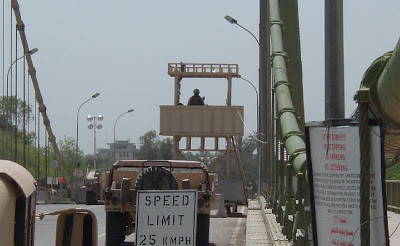 BAGHDAD — The square in front of the July 14 Bridge in Baghdad is closed by troops several times a day. The bridge leads into the American-controlled Green Zone. On the square, not far from the Green Zone, lie the offices of the president and the head of the biggest parliamentary bloc. Official convoys come and go all day long.

In the many times that I have been at that square, no one has ever objected to soldiers closing off the road while some official’s convoy passes by. We all turn off our cars and sit there and wait.

Wednesday, however, was different. I couldn’t believe my eyes.

Around 12:30 p.m. several vehicles loaded with Iraqi soldiers accompanying two or three buses stopped in mid square and tried to close it (like every day) but drivers refused to obey. We are tired of closed roads.

The horns of tens of cars were loud. Angry drivers yelled at soldiers. Not even when the soldiers brandished their rifles at the cars would the drivers stop. There were shots in the air, but the vehicles continued on. The military saw, for the first time I think, mass anger for blocking roads.

I have been in this square almost every day for the last four years, on the way to one official function or another, and nothing like this has ever happened. This time, the soldiers were forced to park their vehicles in a way that allowed civilian cars to pass.

There was news Wednesday from Fallujah of students demonstrating, demanding the release of Muntathar al Zaidi, the journalist who threw the shoe at President Bush. The students waved their shoes and threw stones at American soldiers. Things escalated and soldiers started to shoot, witnesses said. One student was injured.

People have been talking about Muntathar everywhere and at all times for the last two days. For many, he’s become an idol and a star to follow.

My question: Did Muntathar’s shoe-throwing cause this?

[Dulaimy is a McClatchy special correspondent.]

This entry was posted in RagBlog and tagged Iraq, Iraq Occupation, Political Protest. Bookmark the permalink.