Does the Pentagon Intend to Betray the Iraq SOFA? 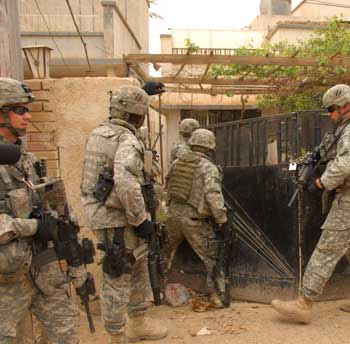 WASHINGTON – U.S. military leaders and Pentagon officials have made it clear through public statements and deliberately leaked stories in recent weeks that they plan to violate a central provision of the U.S.-Iraq withdrawal agreement requiring the complete withdrawal of all U.S. combat troops from Iraqi cities by mid-2009 by reclassifying combat troops as support troops.

The scheme to engage in chicanery in labeling U.S. troops represents both open defiance of an agreement which the U.S. military has never accepted and a way of blocking President-elect Barack Obama’s proposed plan for withdrawal of all U.S. combat troops from Iraq within 16 months of his taking office.

By redesignating tens of thousands of combat troops as support troops, those officials apparently hope to make it difficult, if not impossible, for Obama to insist on getting all combat troops of the country by mid-2010.

Gen. David Petraeus, now commander of CENTCOM, and Gen. Ray Odierno, the top U.S. commander in Iraq, who opposed Obama’s 16-month withdrawal plan during the election campaign, have drawn up their own alternative withdrawal plan rejecting that timeline, as the New York Times reported Thursday. That plan was communicated to Obama in general terms by Secretary of Defence Robert M. Gates and Chairman of the Joint Chiefs of Staff Admiral Mike Mullen when he met with his national security team in Chicago on Dec. 15, according to the Times.

The determination of the military leadership to ignore the U.S.-Iraq agreement and to pressure Obama on his withdrawal policy was clear from remarks made by Mullen in a news conference on Nov. 17 — after U.S. Ambassador Ryan Crocker had signed the agreement in Baghdad.

Mullen declared that he considered it “important” that withdrawal of U.S. forces from Iraq “be conditions-based”. That position directly contradicted the terms of the agreement, and Mullen was asked whether the agreement required all U.S. troops to leave Iraq by the end of 2011, regardless of the security conditions. He answered “Yes,” but then added, “Three years is a long time. Conditions could change in that period of time…”

Mullen said U.S. officials would “continue to have discussions with them over time, as conditions continue to evolve”, and said that reversing the outcome of the negotiations was “theoretically possible”.

Obama’s decision to keep Gates, who was known to be opposed to Obama’s withdrawal timetable, as defence secretary confirmed the belief of the Pentagon leadership that Obama would not resist the military effort to push back against his Iraq withdrawal plan. A source close to the Obama transition team has told IPS that Obama had made the decision for a frankly political reason. Obama and his advisers believed the administration would be politically vulnerable on national security and viewed the Gates nomination as a way of blunting political criticism of its policies.

The Gates decision was followed immediately by the leak of a major element in the military plan to push back against a 16-month withdrawal plan — a scheme to keep U.S. combat troops in Iraqi cities after mid-2009, in defiance of the terms of the withdrawal agreement.

The New York Times first revealed that “Pentagon planners” were proposing the “relabeling” of U.S. combat units as “training and support” units in a Dec. 4 story. The Times story also revealed that Pentagon planners were projecting that as many as 70,000 U.S. troops would be maintained in Iraq “for a substantial time even beyond 2011”, despite the agreement’s explicit requirement that all U.S. troops would have to be withdrawn by then.

Odierno provided a further hint Dec. 13 that the U.S. military intends to ignore the provision of the agreement requiring withdrawal of all U.S. combat troops from cities and towns by the end of May 2009. Odierno told reporters flatly that U.S. troops would not move from numerous security posts in cities beyond next summer’s deadline for their removal, saying “We believe that’s part of our transition teams.”

His spokesman, Lt. Col. James Hutton, explained that these “transition teams” would consist of “enablers” rather than “combat forces”, and that this would be consistent with the withdrawal agreement.

But both Odierno’s and Hutton’s remarks were clearly based on the Pentagon plan for the “relabeling” of U.S. combat forces as support forces in order to evade a key constraint in the pact that the Times had reported earlier. In an article in The New Republic dated Dec. 24, Eli Lake writes that three military sources told him that the U.S. “Military Transition Teams”, which who have been fighting alongside Iraqi units, as well as force-protection units and “quick-reaction forces”, are all being redesignated as “support units”, despite their obvious combat functions, “in order to skirt the language of the SOFA [status of forces agreement]”.

U.S. commanders have not bothered to claim that this is anything but a semantic trick, since the redesignated units would continue to participate in combat patrols, as confirmed by New York Times reporters Elisabeth Bumiller and Thom Shanker Thursday.

The question of whether Iraqis would permit such “relabeled” combat forces to remain after next June was discussed with Obama on Monday, according to the Times report. One participant reportedly said Gates and Mullen “did not rule out the idea that Iraqis might permit such troops…”

Despite Odierno’s assertion of the U.S. military’s prerogative to unilaterally determine what U.S. troops may remain Iraqi cities, the Iraqi government has already made it clear that the U.S. military has no such right. Defence Ministry spokesman Maj. Gen. Mohammed al Askari, responded to Odierno’s and Hutton’s statements by saying that U.S. commanders would have to get permission from the Iraqi government to station any non-combat troops in cities beyond the deadline.

The signals from Odierno of U.S. military defiance of the withdrawal agreement suggest that the Pentagon and military leadership still do not take seriously the views of the Iraqi public as having any role in determining the matter of foreign troops in their country. Nevertheless, the withdrawal agreement is still subject to a popular referendum next July, and Iraqi politicians have already warned that evidence of U.S. refusal to abide by its terms will affect the outcome of that vote.

Washington Post reporters quoted Sunni legislator Shata al-Obusi as saying that Iraqis “will see this procrastination and they will vote no against the agreement, and after that the government should cancel it according to its provision”.

Beyond the aim of getting Obama to abandon his 16-month plan, the military and Pentagon group still hopes to pressure Obama to agree to a long-term U.S. military presence in Iraq.

Further evidence emerged last week that Gates is a central figure in that effort. In a Washington Post column Dec. 11, George Will quoted Gates as saying that there is bipartisan congressional support for “a long-term residual presence” of as many as 40,000 U.S. troops in Iraq, and such a presence for “decades” has been the standard practice following “major U.S. military operations” since the beginning of the Cold War.

Those statements evidently represent part of the case Gates, Mullen and the military commanders are already making behind the scenes to get Obama to acquiesce in the subversion of the intent of the U.S.-Iraq agreement.

[Gareth Porter is an investigative historian and journalist specialising in U.S. national security policy. The paperback edition of his latest book, “Perils of Dominance: Imbalance of Power and the Road to War in Vietnam”, was published in 2006.]