Don Swift : Narcissism and the ‘Weeper of the House’ 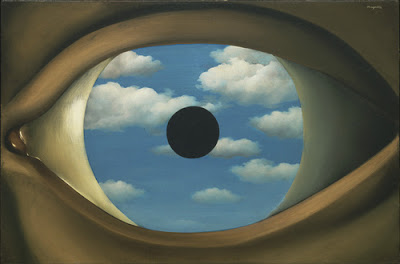 René Magritte’s “The False Mirror” (1928).
A crying matter:
Reflecting on the ‘Weeper of the House’

Narcissism speaks to problems of the heart or soul.

Speaker-designate John Boehner’s inclination to cry has been the object of considerable comment. When I first noticed it, it was in connection with the fact that as a boy and young man he had to work a lot of skut jobs to get started in life and graduate from Xavier University in Cincinnati.

At first I thought the crying meant he resented that and was a real narcissist. I got through high school doing many things, including setting pins, and worked many jobs to get through my university. I count all that experience as a great blessing and education in the school of ordinary life and resented what I thought was his egotism.

Barbara Walters and some others thought Boehner’s weeping indicated he had emotional problems.

Reflecting more on the matter, I realized that this was a man who was the exact opposite of a policy wonk. He has a way of uttering bromides and thinking in terms of bumper stickers. My impression was that he was mentally lazy, but this could not be true. After all he became a multimillionaire.

The one common feature to his crying incidents is his deep belief that the American Way of Life should lead to the American Dream — becoming a millionaire like him. He no longer visits schools in his shoestring-like district because he fears that the children no longer have that opportunity.

Clearly, in his mind, the Democrats stripped these kids of that possibility by levying “job-killing” taxes, regulating business, and creating big government to sap the next generations of initiative.

When it comes to essential beliefs, Konrad Lorenz noted that many people cannot deal with ambiguity or disconcerting facts. Maybe it is because they fear death. They must have a comforting conventional wisdom to cling to.

Moreover, they need the comfort of an intellectual bubble. Hence, Boehner says the health care bill provides for death panels, abortions, and an abortion “fee” for women who receive them.

Boehner is a Country Club Republican who pals around with lobbyists; he is not a Tea Bagger. Yet his mindset gives us some insight into the Tea Baggers, whose need for the emotional comfort of the verities of the conventional wisdom is so much greater. Fearing that their country is in decline and that the decline of the middle class cannot be reversed, many Americans succumbed to political fundamentalism — embracing an extreme version of political orthodoxy.

In every form of political fundamentalism history has known, concern for ethnic purity eventually becomes central. Hence, hatred of Muslims became greater right after 9/11. And of course there was all the nonsense about Obama being a Muslim socialist. Unfortunately, he was in the right place at the wrong time.

Boehner seems to be more reality-oriented than the Tea Baggers. But he and they went through a great shock as our financial system almost fell apart and we almost slid into depression. We know that people who cannot handle the stress of their fundamental views being challenged must double their devotion to them.

Soon Boehner and Mary Matalin were saying that the financial and economic problems were entirely due to efforts to regulate the economy. For Boehner, making these claims came naturally. He has to believe them. Matalin, a sharp political operative who lives with someone with access to a lot of solid data, may not have believed a word of all this.

She may know that a time of deep crisis is the best time to sell conventional wisdom, even “wisdom” that has proven to be largely false.

Our founding fathers thought democracy depended upon rational, informed voters. Enough history has passed to show that voters sometimes have a terrible time with reality.

As E.J. Dionne has written, most Democratic politicians are more interested in policy and the mechanics of legislation. They are light years behind the Repugs in understanding cognitive theory and political psychology.

As for Boehner’s narcissism, it seems there is some guilt on that count. He admitted that a couple of his many siblings were out of work, but he did not seem to know which ones or how deep their problems were.

It speaks volumes when a political party threatens to stop legislative activity if the rich do not get a two-year extension of a tax break at the same time that the party only grudgingly agrees to extend unemployment for 13 months.

Narcissism speaks to problems of the heart or soul. When there is not national revulsion over these antics or the Republicans’ attempts to block assistance to the 9/11 first-responders, we are speaking about problems with a nation’s soul.

1 Response to Don Swift : Narcissism and the ‘Weeper of the House’